After a 6-10 finish, Washington looking to the draft for improvement

As the Packers and the Steelers prove to be the last teams standing with Super Bowl Sunday just two weeks away, fans in our nation's capital are left weeping over another losing season for their beloved Redskins. It seems as if every offseason brings optimism to the Washington fanbase, with owner Dan Snyder bringing in gaudy, high-priced free agents – only for the hopes and dreams of 'Skins faithfuls to be crushed when the burgundy and gold spend another year as an NFC East bottomfeeder. 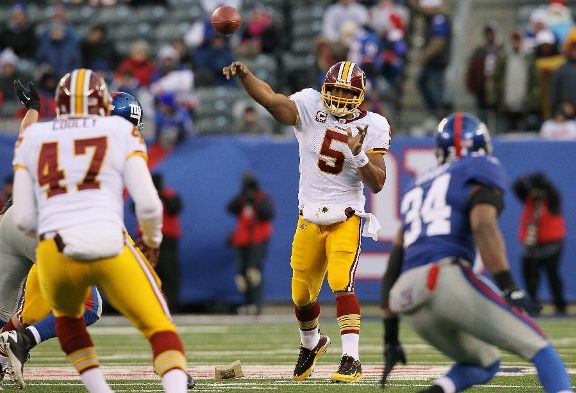 Photo: The Redskins are likely to either trade or release quarterback Donovan McNabb after an underachieving and drama-filled season.

Photo: The Redskins are likely to either trade or release quarterback Donovan McNabb after an underachieving and drama-filled season.  Photo courtesy of ESPN.com.

2010 was a rollercoaster of a season (isn't it always?) for the Redskins, as new head coach Mike Shanahan and veteran quarterback Donovan McNabb got Washington off to a 3-2 start. But drama and controversy ensued with the ongoing Albert Haynesworth fiasco along with the benching of McNabb in week eight. The 'Skins went on to lose five of their last six games and finished the season with a record of 6-10, good for a last-place tie in the division with Dallas.

A few games and moments stand out in what was another heartbreaker of a season for the burgundy and gold. An Alex Barron hold in week one to give the 'Skins the win over the Cowboys. A week five overtime victory against the Super Bowl-bound Packers. Haynesworth lying on the turf in a 59-28 thrashing at the hands of Philadelphia in week 10. The botched extra point in a 17-16 week 14 loss to Tampa Bay. Rex Grossman taking the starting spot from McNabb, and Haynesworth's four-game suspension to end the season. It was a crazy season to say the least –one that resulted in another year at the bottom of the standings.

Obviously, the Redskins weren't expected to do too much damage this year just months removed from a 4-win 2009 season, but major changes in the organization prior to the season did seem to bring promise of positive change. On Dec. 17, 2009, the Redskins fired General Manager Vinny Cerrato and hired Bruce Allen, son of Hall of Fame head coach George Allen. A month later, Jim Zorn was replaced by two-time Super Bowl winning head coach Mike Shanahan. Then, in April, the 'Skins sent shockwaves throughout the league when they traded within the division for McNabb. Yet even with all of those offseason moves, Washington still only managed to win six games. 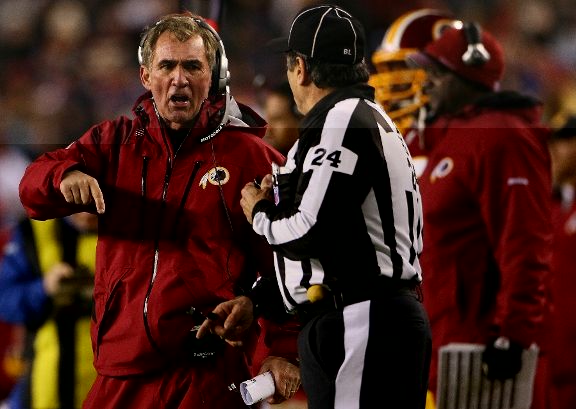 Photo: Head Coach Mike Shanahan took the Denver Broncos to two Super Bowls in the nineties but won only six games with the 'Skins in 2010.

Photo: Head Coach Mike Shanahan took the Denver Broncos to two Super Bowls in the nineties but won only six games with the 'Skins in 2010.  Photo courtesy of ESPN.com.

But look at any dominant team over the last 10 or so years – the Steelers, Patriots and Colts come to mind. Now what do all these teams have in common? They all attained their long-lasting success through the draft, not through free agency. They all understand that building a Super Bowl-caliber team takes time. It's not like basketball, where you might be able to just throw a bunch of all-stars on the court and find immediate success.

Hopefully, Dan Snyder and the Redskins have learned their lesson after all of these years of signing over-priced veterans and swapping picks for declining stars. Now, with McNabb likely on his way out of town, the 'Skins will need to look toward the draft to find their future quarterback – sorry Rex, you're not a reliable starting QB. If Shanahan doesn't go quarterback in the draft, he'll need to address his putrid offensive line situation or tend to a secondary that ranked 31st in pass defense in 2010.

Looking ahead, the Redskins need to face facts. It takes years to build a contender, so it's more beneficial to select talented players in the draft that a coaching staff can mold to fit its offensive or defensive scheme. It's unclear if there will even be a 2011 NFL season, with the current Collective Bargaining Agreement (CBA) set to expire in March. Whether or not the NFL and the player's association come to an agreement, there will still be a draft this spring. Hopefully, the Redskins find the young talent they need to take a step in the right direction towards becoming a consistent playoff team.