Reduce the achievement gap from the beginning

Without preschool, kids have a major academic disadvantage

By the time children reach kindergarten, there is already a vast disparity in academic fundamentals. Educators know it, parents know it and so do children. In a country that prides itself in offering equal opportunities, it should be considered a national catastrophe that so many students are being left behind. In order to start every kid on a level playing field, the U.S. federal government must fund a public preschool system available for all two- to five-year-old children. 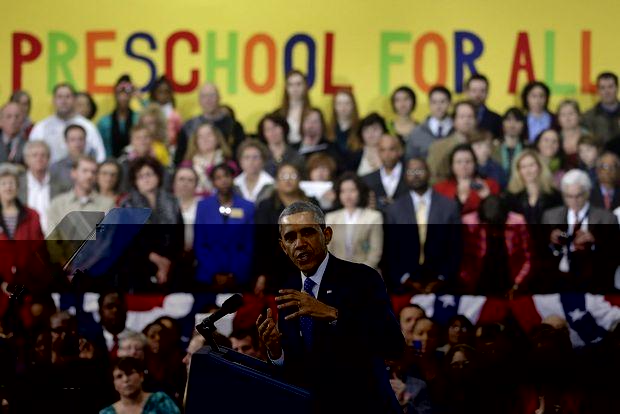 Photo: President Obama speaks at a recreation center in Decatur, Georgia about his plans for increasing preschool enrollment.

Photo: President Obama speaks at a recreation center in Decatur, Georgia about his plans for increasing preschool enrollment.

Pre-K is not child's play. The AACS Learning Center reported that every minute spent in a structured learning environment is critical, especially in such years of intense brain growth. During story time, for example, kids develop listening skills and enrich their vocabulary. According to the Child & Family Network Centers, kindergarteners who attend preschool hear 32 million more words and know three times as many words as those who do not.

I remember sitting in my kindergarten class wondering why some kids could barely read while others, myself included, could spell many words. This made me feel smart; I was too young to distinguish being bright from being fortunate. Family background and socioeconomic status are tremendously important. By the time I arrived at elementary school, I could write the alphabet, put together rhymes, identify shapes, do simple arithmetic and carry out reasonably articulate conversations. That's not surprising. My parents have advanced college degrees and an income that enabled them to send me to a quality preschool starting when I was two years old. A number of my elementary school classmates were not so lucky—kindergarten was their first experience in formal education. They began their school lives already at a marked competitive disadvantage. 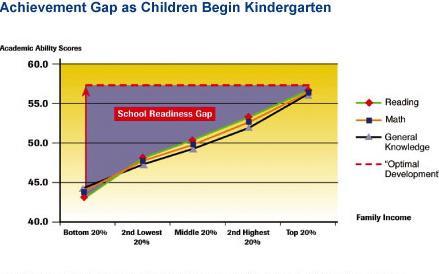 Photo: A graph illustrating the achievement gap at the start of kindergarten.

Photo: A graph illustrating the achievement gap at the start of kindergarten.

In the U.S. today, over two-thirds of three- to five-year-olds are not enrolled in any form of educational program (Kids Count Data Center). By contrast, in Sweden, over 80 percent of children from one to five are enrolled in preschools, in part because municipalities are required to offer preschool to any kids whose parents are working or in school (Sweden/Sverige) .

U.S. laws guarantee all students a free public education until the age of 21, yet there is no assurance of a preschool experience. Currently, the National Head Start Association provides early childhood education to four-year-olds from families living in poverty. Head Start assists many young kids, but it is not available to those of families who fall just above the poverty line, resulting in an eight percent drop in preschool enrollment for families with incomes of 20K-30K, according to the National Institute for Early Education Research. President Obama recognizes the gravity of this problem. In his State of the Union Address back in February, he announced plans to work with states to ensure that every four-year-old attends a high-quality preschool. 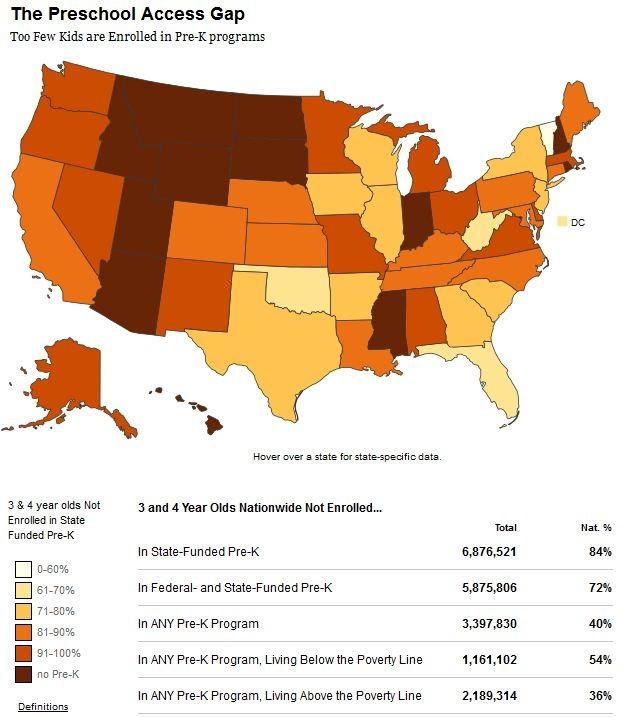 Photo: A map showing how many kids aren't enrolled in preschool.

Photo: A map showing how many kids aren't enrolled in preschool.

Obama is correct in realizing that the time to begin reducing the achievement gap is before elementary school. Once schools begin grouping students by ability, which can be as early as kindergarten, kids in lower track classes often find themselves in a downward spiral, with self-image issues, lower teacher expectations and less motivation, according to the National Education Association.

A poll conducted by Politico found that 70 percent of Americans are in favor of a universal early education program. Rarely do we see such bipartisan support, yet too many lawmakers are failing to adequately fund preschool, fearful of being labeled as "pro-tax." Paying for kids to attend pre-K will entail the major upfront costs that some fear; however, when the government is housing far fewer prisoners and spending less on welfare, the taxes will pay dividends. In fact, the High/Scope study estimates a 14+ percent return on investment. The return would not come for around 20 years, though, while the horizons of lawmakers—elected to terms of two to six years—are far shorter. Until politicians hear more clamor from supporters of universal preschool than the Tea Party crowd, far too many of America's kids will continue to be left behind.