Reflecting on years in the 'Red' zone with Auerbach

No pancakes on game days. No water during practice. No cheerleaders at Celtics games. Former Boston Celtics coach Arnold "Red" Auerbach knows what he wants. 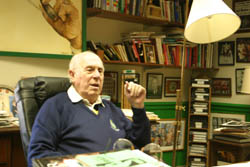 He wanted the nine championships his team won, and because of this, Auerbach
is known as one of the greatest professional basketball coaches of all time. He has been involved in the NBA since its birth in 1946 and began his Celtics coaching career in 1950. Auerbach retired from coaching in 1966 having led the Celtics to nine NBA titles, and he went on to manage and eventually preside over the organization. His long run with the Celtics has generated a litany of stories about coaching, the lessons from which Auerbach has used on the court and in life.

Sitting in his Washington, D.C., office, Auerbach explains that while he had very few rules as a coach, the ones he did have were always enforced. One of them was no pancakes before games. Auerbach thought the pancakes would sit in a player's stomach, slowing him down. One night he caught one of his players, Sam Jones, a 10-year Blair substitute teacher and NBA Hall-of-Famer, eating pancakes at 1 a.m. Auerbach forced Jones to exchange his pancakes for eggs. At the time, Auerbach also wouldn't let his players drink water during practice because he thought it would make them slower. 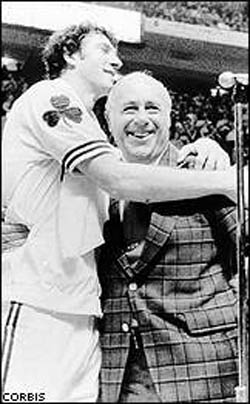 Auerbach now laughs at how times have changed. In today's basketball, coaches emphasize hydration and tell players before a game to load up on fast-burning carbohydrates like pancakes. In his recently published book, "Let Me Tell You A Story," Auerbach says, "So it turns out my theory was wrong. But back then, who knew?"

What Auerbach did know, however, was how to coach a team. Auerbach says communication is key and that "yelling, sarcasm or even cussing" are all legitimate tools if they get through to the players. "It's not what you say; it's what they absorb," says Auerbach.

As a coach and as a person, Auerbach commands respect wherever he goes. Celtics great Larry Bird once said, "When Red Auerbach walks into the room, everyone knows their place. Everyone respects him. And when Red says something, you listen to him."

In one incident, he lashed out against superstar Bill Russell. Auerbach was retired from coaching at the time, and Russell was the Celtics player-coach. Russell was caught in a blizzard before a game and couldn't get there on time. Auerbach came out of the stands to coach the team. By the end, the Celtics were up by 18 points with 15 seconds to go. "Russell comes in with his big derby hat and coat, and he's happy as hell. After the game we went into the locker room. I yelled, 'Where were you?' Russell replied, 'I got caught in the blizzard.'"

Auerbach then told him that Celtics player "[John] Havlicek walked for four miles in the snow, and you were driving in your Lamborghini. 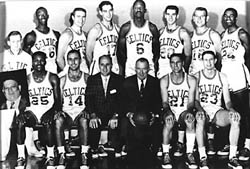 You're Bill Russell. We missed you as a coach and as a player. I don't care about this game. I care about the next one." He remarks that although the game was over, he "wanted him to owe us one for his stupidity."

At 1,037-548, Auerbach's record ranks among the top five in NBA history. Auerbach explains that what kept the players motivated after six straight NBA championships was simply that they "decide it's more fun to win than lose. The accolades that go with winning far surpass those of losing. It's pretty good to walk around knowing you're part of the greatest basketball team in the world."

Looking back, Auerbach says the sport has not changed that much over the years. One difference between the NBA of the past and that of today is that nowadays, professional teams have four or five coaches instead of just one. "That's the biggest joke since sliced bread," he says. "They just get in each other's way." 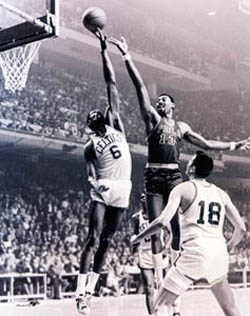 Another basketball element that has evolved over time is a concept Auerbach created. His notion of the "sixth man" has considerably changed the sport by strengthening the team as a whole. In contrast to his opponents' substitutes, Auerbach's sixth man was as strong a player as his starting five. The NBA took notice and today awards an annual Sixth Man Award.

Auerbach, now 87 years old, packs up his belongings as he prepares to leave his office. The signed photographs and sports memorabilia chronicling his life completely cover the office's tables and walls. He leaves for his weekly lunch in Chinatown with some of his close friends and fellow sports icons, including Morgan Wooten, a Blair alumnus and former DeMatha basketball coach.

Auerbach, one of the biggest names in the history of basketball, drives off in his white Mercedes Benz with the green "Celtics” logo proudly adorning its vanity plate. The life story of this living legend can be read on his white baseball cap, embroidered simply with one word - "Coach."