The word Mediterranean conjures up images of sunny days, a light sea breeze and complete relaxation. Named after the "Levantine" region that comprises modern day Turkey, Greece, Lebanon and Israel, Levante's restaurant describes itself as a fusion of various Mediterranean cuisines on its website. But with its menu of fried appetizers and boring entrees often loaded with burdensome sauces and chunks of meat, Levante's is anything but light and airy. 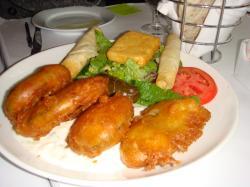 Photo: The appetizer sample at Levante's, in Bethesda, is filled with fried foods.

Photo: The appetizer sample at Levante's, in Bethesda, is filled with fried foods.

With the very first course, Levante's shows off its penchant for oil and breading. More than half of its appetizers are served fried, and the "Levante plate," a sampling of various appetizers, is essentially fried foods served on a bed of Tsatziki (yogurt with diced cucumbers, garlic and dill). The overabundance of feta cheese in the Levante's cigars overpowers the bland breading and everything else consumed in the next five minutes.

By contrast, the fried eggplant and zucchini are underwhelming and under-seasoned. The airiness of the Tsatziki helps counterbalance the huge amount of oil on the plate but cannot erase the greasiness of the dishes. Dolma is the rare un-fried appetizer, a gem in the sea of fried foods. Wrapped in marinated wine leaves, the medley of rice, pine nuts and black raisins is fragrant and flavorful.

Thankfully, the entrees lightened up on the oil and salt. Unfortunately, none of the entrees stand out. The lamb guvec, served in a red sauce with white rice, contains chunks of lamb meat mixed with vegetables. Despite its huge quantity, the otherwise flavorful and tender lamb drowns in the bland tomato sauce. With a few more spices, the dish could become a flavorful delight, but the current dish is reminiscent of lamb and vegetables in a watered-down pasta sauce. 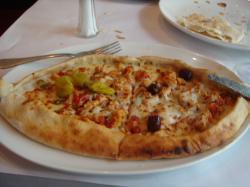 Likewise, the beef pasticcio is lackluster and heavy. Consisting of layers of Greek noodles, ground beef, tomato sauce and parmesan, the dish could easily be mistaken for a dish made from a box of Hamburger Helper. Like the lamb guvec, the flavorless tomato sauce completely overtakes the ground beef and noodles. Instead of being held together by the traditional egg and cheese mix, Levante's pasticcio is held together by heavy and greasy parmesan cheese.

Pides, Levante's specialties, are essentially tomato-less pizzas. The chicken pide is smothered with Kaser cheese, which overwhelms the tender hunks of chicken and few pieces of vegetables. Although better than the typical Pizza Hut pie, the huge pides are greasy and easily forgettable.

Vegetarians are spared the liberal amounts of meat and grease in their dishes, though their choices are much more limited. Only two of the six entrees are meatless and an overwhelming majority of the main courses contain either poultry or seafood. But from the limited selection, vegetarians can choose from spinach pie, vegetable pasticcio and various pides. 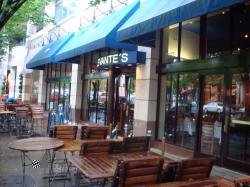 Photo: The Bethesda restaurant is warm and welcoming and has great service.

Photo: The Bethesda restaurant is warm and welcoming and has great service.

Though the food is mostly sub-par, the service is impeccable. Upon arrival, a server escorts the diner to a candlelit table and almost immediately brings a basket of warm pita bread. Servers are courteous and try their hardest to satisfy customers. When a patron complained that her ayran, a popular Turkish yogurt drink, was too salty, a waitress immediately offered to take the drink off her bill.

Like the service, the atmosphere at Levante's is warm and friendly. Deep blue walls and numerous mirrors piece together the restaurant, while stark white tablecloths cover the tables. A candlelight that is lit each evening by a server adds to the warm and comforting atmosphere. Students might have to speak quieter than usual, as a loud laugh or statement will attract the attention of the other patrons and the servers.

Surprisingly, the prices at Levante's reflect the food and not the ambiance, unlike the other posh restaurants that line the streets of Bethesda. Appetizers cost around $6, and the gigantic Levante plate, which could easily serve four people, costs $9.25. Most entrees are around $10, although both the two seafood dishes cost $18.95. With the huge portions, the prices are comparatively low and Blazers could return again and again without becoming bankrupt. Levante's chooses quantity over quality, so if Blazers are looking for huge portions of average food, Levante's is a great place. But if Blazers are looking for good food and a good atmosphere, they would have better luck choosing another restaurant.