It's game day and the stadium lights glow as the Blazers stand ready to step onto their turf. Fans are stomping their feet in the stands, decked out in red and white, cheering for their team. Across the field, Northwood students stand equally excited, waiting for the first whistle. Each team wants to win - for the title, for their school, for the bragging rights and for the boulevard. Everyone knows that this match is much more than just another game: it's a battle. 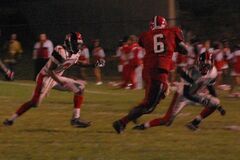 Photo: Senior running back Dayne Bolt rushed for 171 yards and two touchdowns in the Blazers' 41-12 blowout of Northwood last year.

Today's Blazers consider the Northwood Gladiators Blair's greatest rival, a slot that was filled in previous years by Bethesda Chevy-Chase and Springbrook. Regardless of which team is the competition, Blazers have always stepped up their game when facing school rivals. For athletes from both the "Old Blair" and "New Blair," these games are not only chances to show off their skills, it's a way to make sure that that team remembers our name.

Battle of the Boulevard
Every Blair v. Northwood game attracts the attention of students, teachers and coaches. Athletes train harder and play harder. Earlier this year, the boys' varsity soccer team took on Northwood and they knew that this win would be especially important. Junior Aaron Oke felt that they would need to play well in order to defeat the talented Northwood team. "We knew we had to go out strong because this is a huge game," Oke says.

Coach John Haigh also understood the importance of the game for his team. "It was a big deal," Haigh says. "It was the one game they wanted to win more than any other." At the end of the game, the Blazers triumphed 3 - 2 over the Northwood Gladiators and the stands went crazy. "It meant a whole lot," Oke says of the victory. "It felt good because they were ably ranked and the Gazette said they were predicted to win states, so it felt amazing to beat them.

Photo: Senior Alexander Baldwin takes the throw in during the Sept. 9 game against Northwood this year.

Photo: Senior Alexander Baldwin takes the throw in during the Sept. 9 game against Northwood this year. Photo courtesy of Lorena Kowalewski.

The win was crucial for the Blazers because the rivalry started before either team stepped on the field, says senior Jamie Thomas. "It felt good to win because they had been talking trash," Thomas says of the Northwood team. Although the Blazers felt fantastic about their victory, they remained professional in their celebration. "We were really happy but we didn't get in their faces about winning," Thomas says. After claiming control of the boulevard, the Blazers stepped off the turf with pride.

For many players, the rivalry often makes games more fun and intense. Northwood senior Max Amato was disappointed with the soccer team's loss but enjoyed playing in such a huge game. "Everyone gets really pumped," Amato says of the rivalry. "It's fun because we all get to play against people we know." Amato was playing against his old friend senior Otis Banwell in the whole game. "There's always more of a rivalry when people know each other."

Bring 'em out
As fun as it is to face off against old friends on the field, the rivalry can stand for much more. It fosters school spirit and pride for Blazers. Students brave the cold and put off homework in order to come out and stand up for their teams. Attending tailgate parties before games and standing through wind and rain, Blazers are more than willing to be a part of this battle.

"The Blair v. Northwood games always pullout the largest crowds. I love that Blazers are so excited to rep their school and support them at such an important event," senior cheerleader Sydney Smith attests. "I see people at those games that I've never seen at any other games."

The teams also love looking into the stands and seeing a sea of exuberant faces. Varsity football player senior Frank Aje is excited about their Nov. 6 game against Northwood. "We're going to go out big. It's the battle for the boulevard, man!" Aje exclaims.

However, the team isn't all talk and no walk, as they acknowledge that serious practice will help lead to a victory for the Blazers. "We've been practicing," Aje says. "We need to focus. We need to work."

Not quite the golden days 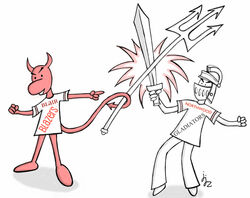 Photo:
For Blazers of the past, rivalries meant much more than they do today, according to assistant athletic director and former Blair student, John Macdonald. Although he recognizes that the Blair v. Northwood boys' soccer game had a huge turnout, he explains that game attendance today doesn't even compare to that of games 20 years ago. "When Springbrook would come to Blair, it was like a college environment. There was literally standing room only and the gym would be so loud and so warm from overflowing bodies," Macdonald recounts.

While today's Blazer athletes may exchange some words on and off the field, Macdonald remembers past Blair athletes as being more aggressive. "When it came to Springbrook back then, we were not good sports. There was lots of name calling and fights...I remember more than a few isolated incidents during games against them," he says.

Macdonald doesn't believe that Blazers today truly understand the concept of a real rivalry. With stands being nearly empty at Blazer home games, he doesn't think there is enough school spirit to foster a legitimate rivalry. "It's difficult to explain to modern day students what school spirit even means, let alone the intensity of a real rivalry," he says.

Although Blair rivalries may not be as intense as they once were, Blazer athletes still feel the competition on the field. As they lace up their shoes, they've got their school in mind. In rivalry games, they are all stepping out on that field together, as one school, ready to claim this boulevard.