Teenagers from Haiti, just like their peers all over the world, like to talk about their hobbies and interests, and about the life that surrounds them :

I think what really separates the Haitian teenagers from American teenagers is respect. From childhood kids there are taught to respect their elders and their own peers, however, I see less of that here. Also students in America curse a lot, but you really don't see any of that in Haiti. Students also dress more appropriately than students here.

If I had a choice, I would definitely want to live in Haiti. I love my country! Yes there is gang banging, yes we are poor - but we still have the energy to overcome those problems together.

I moved to America to get a better education, but I know that my life, my blood, my soul is all in Haiti.

Some of my hobbies include basketball, watching movies and hanging out with friends. I came to America in 2002. I am originally from Port au Prince, the capital of Haiti. I like America more than Haiti, because there are more opportunities in this country than back home.

There are many differences between the countries. For example, at school, there are 13 grades in Haiti, compared to 12 here. Also, in Haiti, the students usually stay in one classroom and the teachers come to them. Personally, I like American school more, because there are more girls here and teachers give less homework.

I think the students in Haiti are affected by the American culture. You can see teenagers trying to act gangsta and talk ghetto, and almost all of them listen to American music.

I came to America two years ago. I first came to visit some of the family that lives here, but then I ended up staying here. My mom wants me to return home, but I really like it here more. The main reason is the security. I feel more secure here. In Haiti you can just be walking in the streets and you are exposed to being shot. Basically, there is no security at all.

I think the education in Haiti is much stronger than here, but they are very strict in Haiti. The teachers beat you with a whip if you do not do your work. You also get more work there than here and you are supposed to take classes that the school gives you. Here you get to choose your classes. Another reason why I like Blair more than the Haitian school I attended is because Blair is so diverse.

Location: Haiti is located on the western island of Hispaniola, between the Caribbean Sea and the North Atlantic Ocean, west of the Dominican Republic.

History: The Island of Haiti was discovered by Christopher Columbus in 1492. Then, in the 1700's it became a French colony and in 1804 it gained its independence, becoming the Empire of Haiti.
The country's struggle for democracy continued in the 20th century as it underwent many struggles, for example poverty. In the 80's it became known as the poorest country in the western hemisphere.
The period that followed was marked by bloodshed. However, during that time peasants, trade unions, church groups, human rights groups, women and youth brought the victory of Jean Bertrand Aristide in the 1990 presidential election. Nevertheless, his rule was short lived, because he was ousted in 1991.
After Aristide stepped down, the country experienced two more presidential changes and underwent some more problems. Aristide was eventually reelected as president in 2000. Then, on February 26, 2001, Aristide was forced to end his rule.

Currently the country is still in vast poverty and many Haitians are struggling every day just to survive.

Language: French and Creole are the two official languages of the country.

Anthem: Visit this site to hear the national anthem of Haiti. 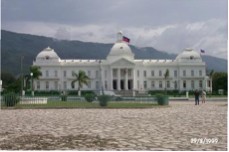 Port-au-Prince - This is the capital and the largest city in Haiti. Port-au-Prince was the French colonial capital of Dominican Republic between 1770 until 1804, when it became the capital of Haiti. Port-au-Prince is the most significant seaport and the shopping centre of Haiti. The most picturesque site in Port-au-Prince is the Iron Market. There you can see Tap-Taps, vehicles with colorful decorations, usually representing its owner. The cars also reference the protective spirit, with words such as "Thank you Jesus” written on them, which are supposed to provide protection to the people. While in Port-au-Prince you can also visit the National Palace, the Basilica of Notre Dame, and the French-built stone quay (1780), which are all popular tourist attactions. 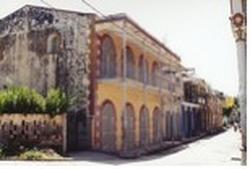 Jacmel - The city's name derives from words that mean "rich land.” The name is a great representation of the area, which has one of the most beautiful sceneries in Haiti. It is the perfect place to visit if you would like to unwind. There you can enjoy bathing in the sun at the white sand beaches and visit an old village that is currently a museum right in the center of the city. 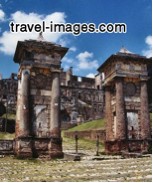 Photo: The entrance to the San Souci palace

Photo: The entrance to the San Souci palace

Cap Haïtien - Cap Haitien is located on the northern coast, the country's second largest city and former capital. The city's glory faded after it was destroyed and rebuilt four times, only to be cut off and left to rot by Duvalier in the 1950s. Some colonial architecture still remains and there. A few kilometers south of town are two monumental reminders of the reign of the self-proclaimed King Christophe. Sans Souci Palais was to have been Christophe's new capitol building. An earthquake in 1842 brought the roof down; scavengers have since made off with its fixtures and marble floors. The Citadelle squats atop a 900m (3000ft) mountain and is a massive fortress that took 20,000 slaves over 10 years to build.