Republicans on the rebound

"Palling around with terrorists," is a pretty appalling accusation coming straight from the mouth of Republican vice presidential candidate, Governor Sarah Palin (Alaska), describing the alleged habits of Democratic presidential candidate Senator Barack Obama (Ill.) as she addressed an audience. 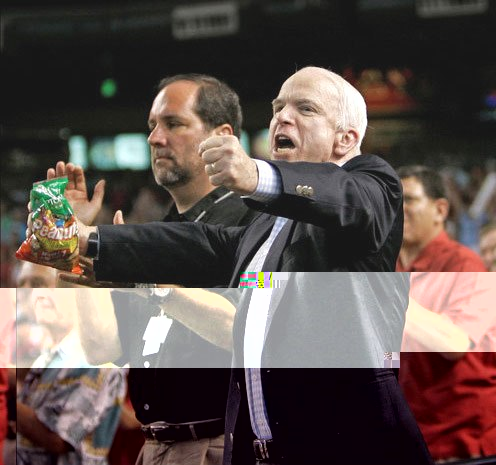 It's nothing new from a slew of hateful sermons from Palin, who I reasoned to be a rabble-rouser since her first appearance out of remote Alaska at the Republican National Convention. Plus, look at her role model, Republican presidential candidate Senator John McCain (Ariz.), a.k.a. "The Maverick," who is trying to rebound his campaign as polls show Obama regaining momentum. A recent ABC-Washington Post poll indicated Obama is leading by at least 10 points. It's obvious that McCain's rebound needs some more revving up, because the comments he retorts against Obama are off-base and back-firing. If you watched him at the second presidential debate, he pointed to Obama and called him "that one," which sparked more animosity than his attitude. Much of mainstream media picked up on McCain's disdainful approach toward Obama, enabling Obama to look more presidential and him a grumpy, way-too-rigid Republican.

At this point, in the last few weeks before Election Day, the days seem to get more malicious as McCain, reiterating his purpose of putting "country first," is more accurately putting a radically racy campaign at the forefront. It's increasingly difficult to fizzle out fact from fiction about Obama, since the McCain campaign seems to be spewing lies and gloomy hints about Obama's character and associations. For example, current advertisements released by McCain suggest that Obama has serious ties to 1960s anti-war radical, William Ayers, who later served on a community organization board with Obama in Chicago. And though it's common for Republicans to be hypocrites - some Republicans also served on that board (according to the Washington Post), the link seems pretty hyped since Obama was just a toddler during the time of Ayers's activism with the Weather Underground. Sporadically, the McCain camp has denounced some volatile comments from various GOP members who are bashing Obama, but they aren't trying to diminish the impact.

If you feel that I'm ranting unnecessarily over McCain's gambits, don't, because I'll admit that his campaign does have some decency and not a complete lack of common sense. As in when the campaign distanced itself with the controversy over Obama's relationship with former pastor Reverend Wright: McCain respectfully claimed the issue off limits.

Similar instances and smear tactics of the McCain campaign have helped to illuminate another issue: race. This recurring issue is permeating the media and the campaign should be concerned with their appeal to minorities as they help fan the flames of mob mentality. Conversely, among many commentators and news outlet, Obama has been the one recognized for bringing people together, among all party lines and reaching for common ground between Americans, especially in this divisive period. Nevertheless, the McCain-Palin Maverick Team has reached a point where they can either relapse or rebound respectfully in the remaining campaign days.