Five rescued child laborers from India, Colombia and Mexico spoke at Blair today during 6th period. The event was sponsored by the Blair Academy of International Studies in conjunction with the International Center on Child Labor and Education (ICCLE). 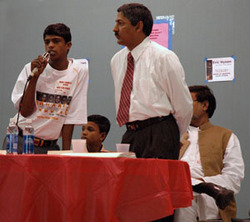 Photo: Puran Bangura, left, discusses his experiences as a slave before being rescued. Dr. Sudhanshu Joshi, right, translated for Bangura.

Photo: Puran Bangura, left, discusses his experiences as a slave before being rescued. Dr. Sudhanshu Joshi, right, translated for Bangura.

Kailash Satyarthi, the founder of the Global March Against Child Labor and the South Asian Coalition on Child Servitude (SACCS), and Dr. Sudhanshu Joshi from ICCLE also spoke. Joshi introduced Satyarthi as a candidate for the Nobel Peace Prize whose work has helped to emancipate over 69,000 children from slavery.

The five children who spoke shared their stories and expressed how grateful they are to be getting an education after being rescued by various organizations in their native countries. All five are now actively working to bring an end to child labor and raise awareness about the issue.

The first speaker, Puran Bangura from India, explained that when his father borrowed money he could not repay, the entire family was forced to work as slaves. Joshi, who translated for Bangura, described Bangura's job as stone mining, a trade which Joshi said is often illegal.

Bangura said many children in India are forced to work twice as hard as adults for no wages. "They are bought and sold like animals," Bangura said.

The other boy from India, 13 year-old Mohmad Samsur, was a "rat-picker." Joshi (who also translated for Samsur) explained that in India, there are huge amounts of trash, which rat-pickers — often very young children — go through to collect anything that can be potentially sold, such as metal scraps, plastic and batteries.

One day when Samsur was taking his trash to a contractor to sell, an activist saw him and told him he should not be working. Samsur agreed that the work stunted his growth and prevented him from playing and getting an education, but at the time he had no other options. He is now receiving a full-time education and learning to paint at the rehabilitation center.

Luz Karime Lemos Viveros, from Colombia, is also getting an education now. She began working at age three to help support her seven brothers and sisters, who are now all in school, said translator Belen Gutierrez.

The other speaker from Colombia, Leidy Johanna Moreno Blandon had two jobs: helping her mother in the domestic service industry and working as a vendor in the street. She lost her father at the age of 13 and had to help support her two brothers, said Gutierrez.

Blandon said she is very grateful that her mother never let her quit school. Now the sixteen year-old is almost finished with her secondary education, and she said she hopes that her two month old baby will never have to work as a child.

Last to speak was Aly Zayory Perez Hernandez from Mexico, who started working at age 13, taking care of a two-year-old and as a messenger in the afternoons, all while attending school, said Gutierrez. Hernandez said she could not concentrate in school because she got so little sleep, and was often up until 3 a.m. trying to finish her homework.

Now Hernandez receives a scholarship so she does not have to work and can go to school without constantly worrying about the welfare of her parents and her sister.

After the children spoke, Satyarthi answered questions from an audience of approximately 200 Blazers.

Satyarthi said that although the children's stories were all deeply troubling and depressing, he hoped they would encourage students to act against child labor. "The purpose of these children is not to shock you, not to upset you, it is to provide hope… each one of them [the children] symbolize courage — they have stood up against all odds," he said.

Satyarthi urged students to be aware as consumers and to write letters to their politicians and large corporations advocating an end to child labor and slavery and ensuring that more of the world's children receive an education. "As a strong consumer, you can start questioning and demanding," he said, adding, "sensitize your neighborhood, your friends, your politicians."

Blair social studies teacher Kevin Moose organized the event in order to raise awareness of child labor, slavery and bondage around the world, to encourage students to act and to prompt interest in the International Academy at Blair.