This school year, all of the bathrooms on the second and third floors have been locked during 5A and 5B lunches. This issue has been on the forefront of many Blazers' minds since the change began at the beginning of second quarter.

When student and parent complaints and SGA negotiations failed to return student "privilege" to use restrooms, many thought the restrooms would remain locked for the rest of the school year. However, yesterday the media came to the aid of an increasingly large contingent of Blair students who have had enough of the locked bathrooms.

Photo:
The Washington Post's Valerie Strauss wrote a blog on Wednesday that poked holes in the reasons for the closed restrooms. She pointed out that an inability to find a better solution does not necessarily mean that the current situation is just. "The school has a security shortage and couldn't figure out a better way to deal with it," she wrote.

Strauss points out an obvious flaw - the larger group is being punished for the actions of a few. "I'm going to take a wild guess that most of the students at Montgomery Blair don't vandalize the bathrooms. And I'm going to further suppose that there must be a better way of dealing with this security issue without locking the bathrooms," she wrote.

ABC 7 News ran a section on the 5:30 p.m. news on Wednesday that quoted many Blair students who were annoyed and outraged that the suppression of graffiti is more important to Blair staff than the needs of students' bladders. ABC 7 stated that the school administration and the county school system were contacted, but both declined to comment. WTOP ran an article on Tuesday, Dec. 2 on their web site that gave similar information.

It is important to note that contrary to ABC 7's story, this change in bathroom rules originated from security and building services staff - not the principal or the administration. ABC 7 also failed to credit Silver Chips Online staffers for information in this story.

But regardless of who started locking bathroom doors, the administration still has the responsibility to ensure that students' rights are protected, and that vandalism and security shortage issues are dealt with in a way that does not penalize the entire student body. 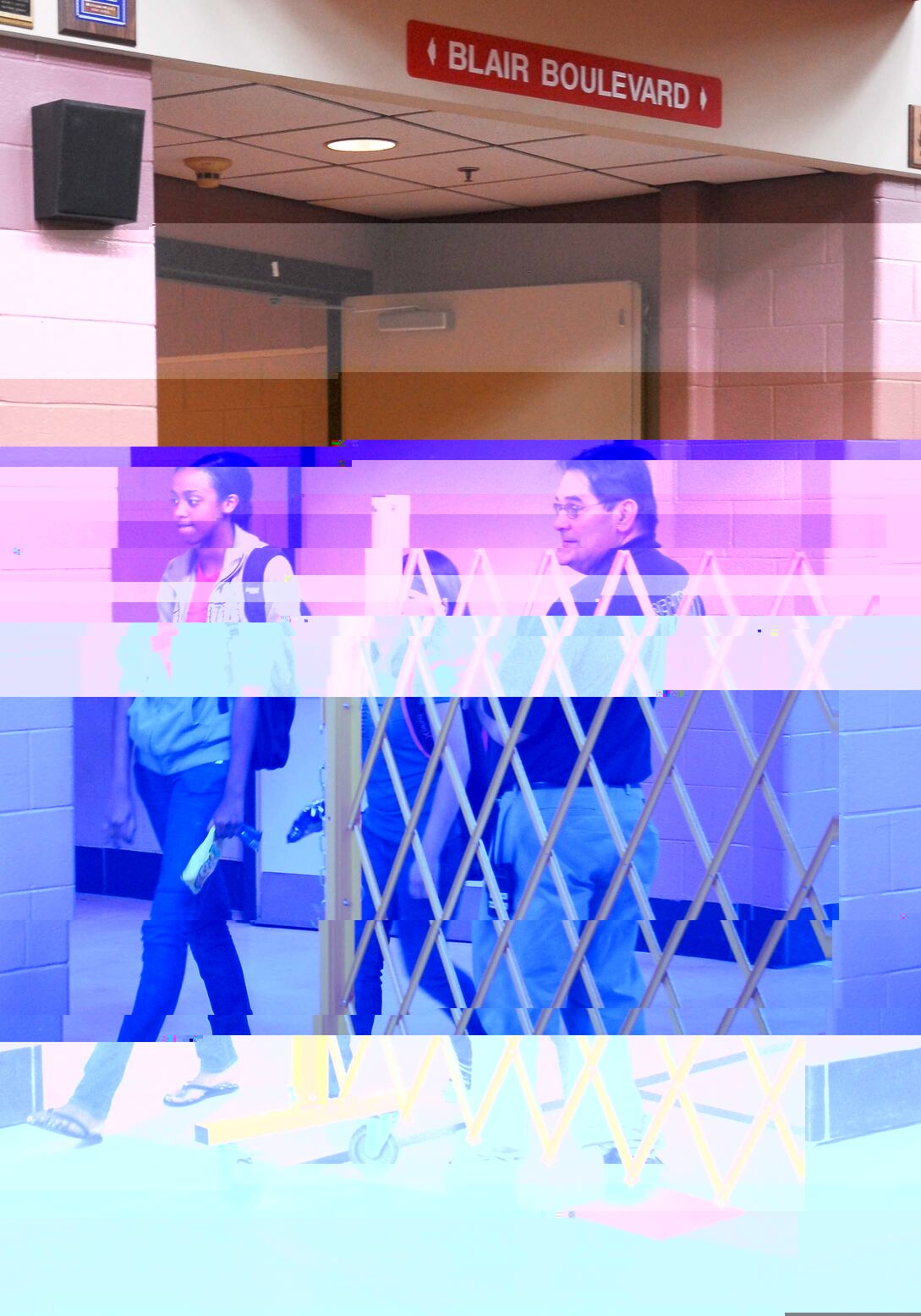 Photo: The yellow gate that stood between the SAC and the rest of Blair Boulevard last year was put at the foot of the main staircase on Tuesday.

Photo: The yellow gate that stood between the SAC and the rest of Blair Boulevard last year was put at the foot of the main staircase on Tuesday.  Photo courtesy of Alex Joseph.

The use of a bathroom is not a "privilege" that a school can take away. Students need to be able to relieve themselves or they will not be able to focus and learn properly. Because lunch time is split into two periods and classes are held during 5A and 5B, students and teachers alike have faced major hassles during class time, especially when students have to miss instruction to search the building for an open restroom. Furthermore, requiring about 1,250 students at lunch to share a single bathroom is unhygienic and unnecessary.

Luckily, the bathrooms won't remain closed for long, according to PTSA Co-President Pete Lafen. In an email to the Blair community, Lafen called the situation a "short term problem." "Substitute security staff and new hires are both being sought to cover the staffing shortfall," he wrote, "and building services is working on restoring the appearance and functionality of the damaged, defaced bathrooms.

This new bathroom regulation is only one of several new rules that, though well-intentioned, are depriving students of their rights. On Tuesday, building services staff brought back the yellow metal fence that once guarded the library and benches on Blair Boulevard during lunch. This time it was being used to stop students from walking up the main staircase. Not only does this fence prevent movement around the building, but it also poses a very serious hazard in case of a fire or other such emergency.

These new rules are not only disrespectful of students but also are potentially dangerous. It is time that the staff stops treating students like enemies and finds better ways to deal with administrative problems.

Colin Wiencek. I am an avid cyclist who participates in many long haul charity rides. Most recently I participated in Bike to the Beach in July of 2009. <br /><br /> I am an avid photographer and am into video. You can watch my video reel and … More »