Repairs scheduled for Blair based on inspections

The Board of Education (BOE) has recommended restroom renovations for Blair in Fiscal Year (FY) 2016, according to Adrienne Karamihas, the capital budget manager for the MCPS Department of Facilities Management. The renovations are part of MCPS's Capital Improvements Program (CIP). 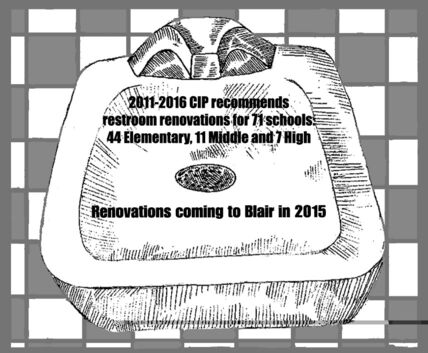 Photo:
Blair is the 60th school on a list of 71 schools to receive restroom renovations in the 2011-2016 CIP. Architects and consultants from the Department of Facilities Management surveyed the schools this past summer and ranked each bathroom based on a list of preset conditions. Items assessed in a visual inspection included existing plumbing fixtures and accessories, according to Bruce Crispell, director of the MCPS Department of Long-Range Planning. While the assessment of these items determined a raw rating for the priority of the school's renovation, business manager James Funk said that the state of the bathrooms will likely change over the next six years before the renovations, which could lead to more repairs than initially anticipated. "It's hard to know what in particular will change and need to be replaced. All they can tell you this early in the process is where you fit in the schedule," he said.

Karamihas said that the purpose of the restroom renovations will be to restore greater function to Blair's bathrooms. Sinks, toilets and pipes will be fixed and replaced, but the program does not entail a full replacement of the existing bathrooms, she said. The Department of Facilities Management will oversee the renovations, according to Karamihas.

According to Karamihas, the order in which schools are assessed depends on their buildings' age, as newer buildings generally need less extensive updates. "Older schools are assessed first, and then it builds up to newer schools," she said. "Since Blair is only 11 years old, it needs substantially fewer improvements than schools that have been around for much longer."

According to Crispell, the county CIP has requested about $6 million for systematic renovations, including those for restrooms. "It's about a million a year," he said, referring to the six years of the CIP. While the BOE has approved the request of Superintendent Jerry Weast, the CIP and the renovation schedule will not be finalized until the request is approved by County Executive Isiah Leggett. After Leggett makes his decision, the proposal will be sent to the full County Council. According to Crispell, Leggett's decision must be submitted to the County Council by Jan. 1.

According to Crispell, any capital project, including restroom renovations, could potentially be affected by future budget cuts. "This is an ambitious CIP and every dollar counts, but [restroom renovations are] a very popular project, and everyone understands the need for restroom renovation, so it is not likely to be scrapped," he said. If budgetary concerns arise in the future, the County Council would be the body to make a final decision as to the allocation of restroom renovation funds, Karamihas said.

The Department of Facilities Management originally surveyed 110 schools to determine the year of their restroom renovations, according to Karamihas. 31 schools will have to postpone their renovations until the 2017-2022 CIP because of limited funding, she said.