Senior Ian Anderson coasts his skateboard down Fenton Street in Downtown Silver Spring (DTSS), scraping his wheels against the sidewalk just feet away from the new Veterans' Plaza. A police officer calls out to him as he rolls by. "Get off your board!” he shouts. "Don't get back on, or you're walking the [expletive] home.”

Anderson has faced this kind of confrontation countless times - so have most DTSS skaters. As in many urban areas, skating is prohibited in the streets and public spaces of Downtown Silver Spring for safety reasons. But according to Maryam Balbed, an activist and skateboarder popularly known as "Sk8ter Mom,” Silver Spring was one of the region's first skating hotspots despite these regulations. Skaters from as far as Olney and White Oak flock to skate the area every day, Balbed says. But legal skating spots downtown are few and far between. When the area's new Veterans' Plaza opened July 8, skaters immediately took to its stairs and railings. Just over two weeks later, on July 26, County Executive Ike Legget issued a ban on skating at the plaza, yet another defeat for the area's skateboarding community. Shortly after the plaza was closed to skaters, a new skate park opened in Silver Spring's Woodside Park, but the small area hasn't satisfied the multitude of skaters looking for a place to work on ollies and kickflips. On the streets of Silver Spring, skaters say they are kicked out and harassed wherever they lay down their boards. But even though their skateboards are often confiscated, the skaters have not been robbed of their will to carve their place in the Silver Spring community. 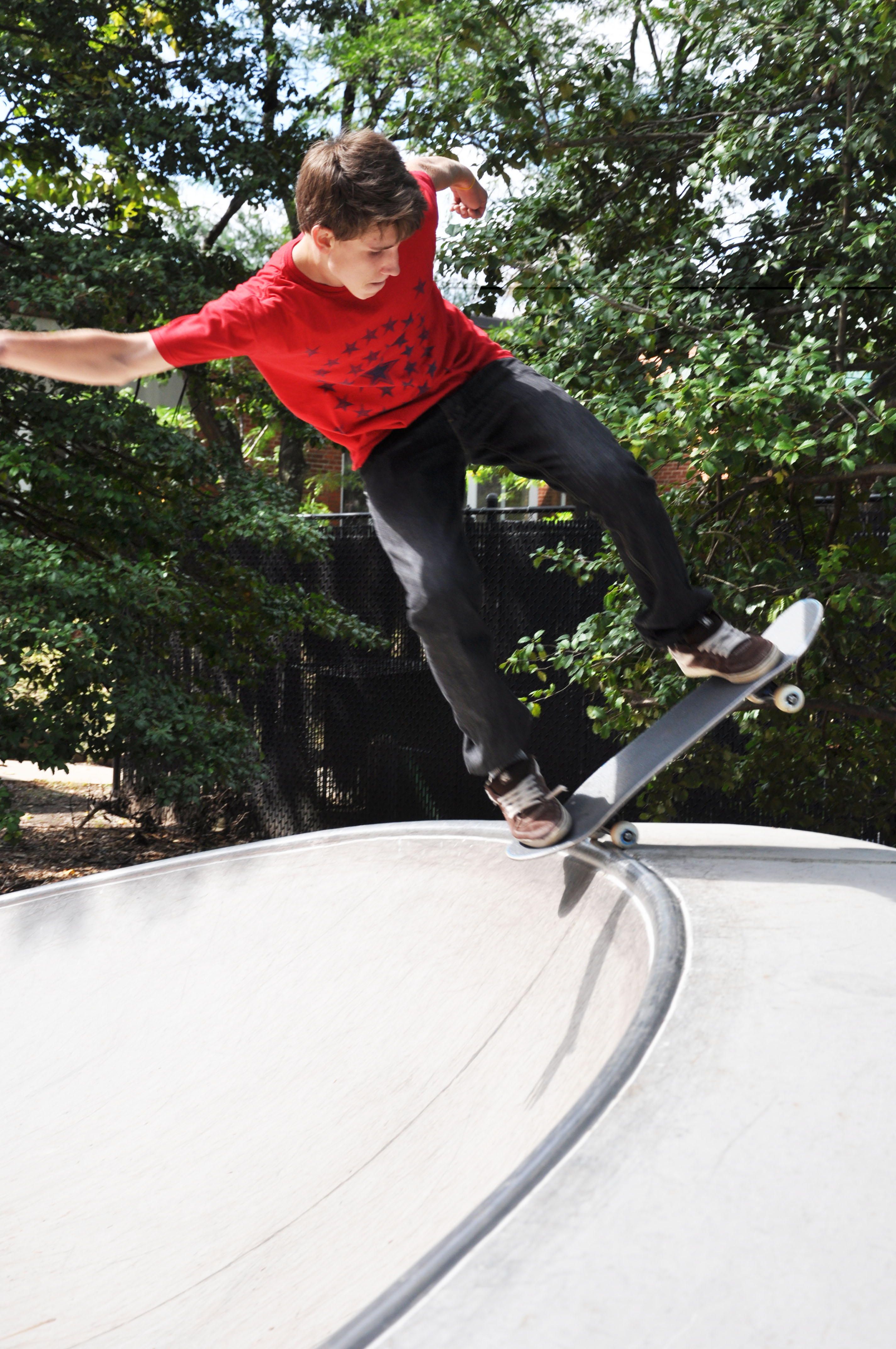 An avid skater since 2008, Anderson frequents the Silver Spring area with friends, looking for places to work on stunts. Around when he started skating, he says, the section of Ellsworth Drive near Chick-Fil-A, across Fenton Street from the main downtown strip, was closed to cars on weekends. At the time, this strip was a safe, legal area for people to skate. But when the street was opened to cars, police started kicking skaters out, forcing them to search out new locations to practice. That was when most skaters migrated to the area around the Discovery building, where skating is technically prohibited, says Anderson. Security and police quickly cracked down, and the skaters began to move around the area, skating wherever they could avoid security. "At that point it was all a chase from spot to spot,” Anderson says.

For skateboarders, finding a skateable site isn't hard - smooth pavement, stairs, railings and ledges are the most important prerequisites for a place to practice tricks, says senior Alexander Terc. Often, Terc says, skaters get resourceful with their surroundings, laying newsstands on their sides and covering them with boards to create makeshift ramps.

Most of the time, pedestrians aren't a problem, Terc says. Some get frustrated with the presence of skaters, but others are fascinated by the skaters' skill. According to Anderson, a few friendly passersby even ask questions about skating or take pictures.

Anderson has never seen an accident involving a skateboarder and a pedestrian, but he does admit that there have been some close calls. One set of stairs next to the Discovery building has a blind corner where skaters skating down the stairs have the potential to hit someone walking by. Usually, he says, a group will have a lookout at the bottom to tell the other skaters when it's safe to go down, but near-accidents do sometimes occur.

According to Reemberto Rodriguez, director of the Silver Spring Regional Center at Veterans' Plaza, the rules against skating in the downtown area are meant to prevent such potential accidents. Both police and DTSS security are tasked with enforcing these rules by keeping skaters from skating where they are not allowed, but their methods and levels of intensity vary from officer to officer. Once, Terc says, security tried to push him off his board on Ellsworth Avenue. He has seen boards confiscated and has even witnessed physical fights between skaters and security. In addition to the issue of physical violence, Balbed says that it is not within security officers' legal authority to confiscate boards. 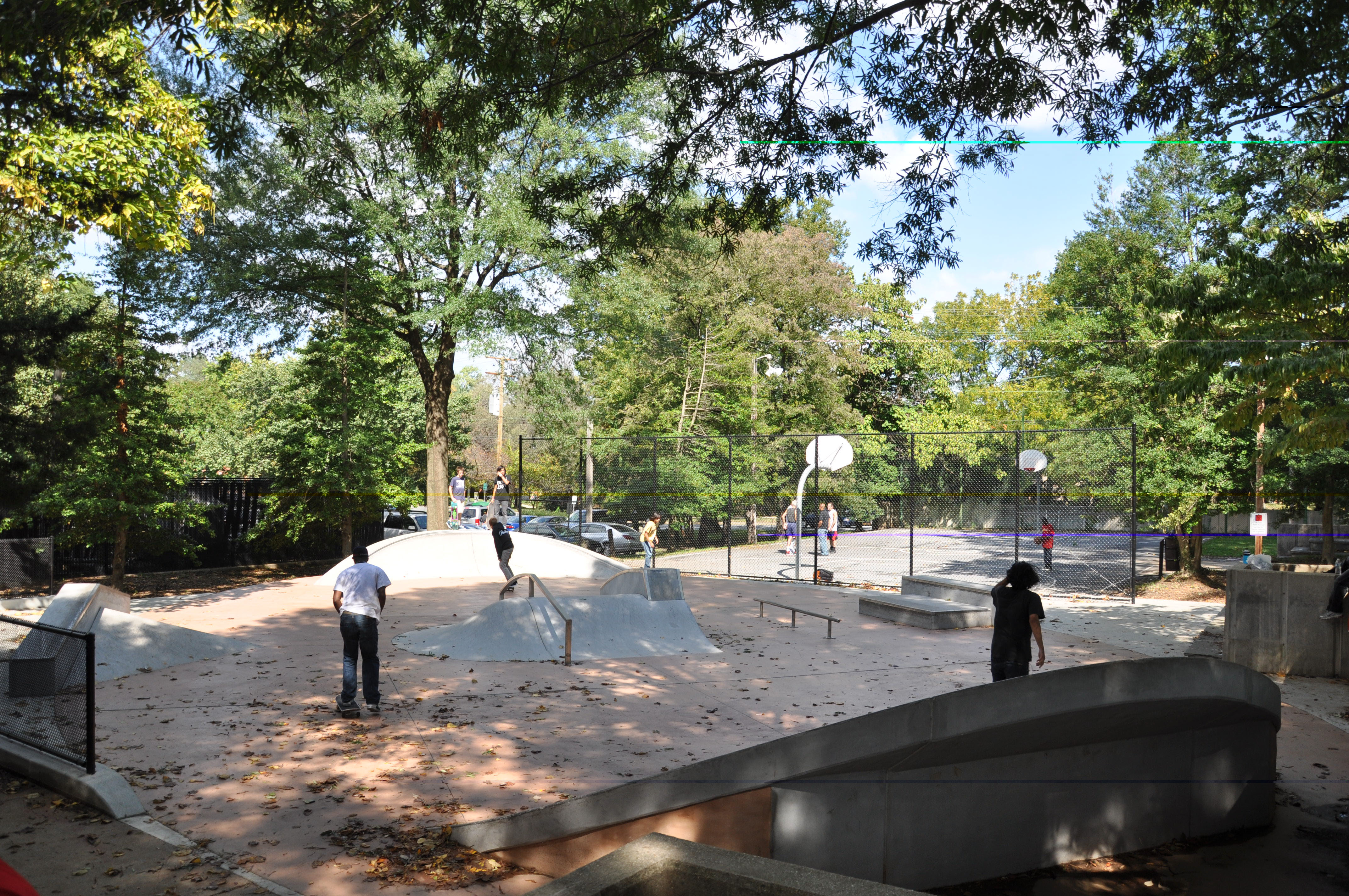 Photo: Local skaters skate at the new Woodside Skate Park, which many skaters have criticized as too small and prone to dangerous overcrowdng.

Photo: Local skaters skate at the new Woodside Skate Park, which many skaters have criticized as too small and prone to dangerous overcrowdng.

While he acknowledges that the officers are just doing their job, Terc is offended by the attitude toward skating that many have taken on. "They act like it's a crime against humanity, like skating is the worst thing you can do,” Terc says.

But the skaters are undeterred by the conflict and continue to try to skate wherever security is not around. "If you go in and get in a few tricks, it's all good in the end,” explains Anderson. For him, the fun of skateboarding comes from being unrestrained by rules, a freedom that many Silver Spring skaters have refused to relinquish, even at the hands of security and police.

When the Veterans' Plaza first opened on July 8, it seemed like an ideal place for skating freely in a central Silver Spring area. According to Rodriguez, there were no initial rules or regulations regarding skating when the plaza first opened. "It was easy and understandable to see members of the community say ‘Oh! What a perfect skate park,” he explains.

Terc and Anderson thought just that. The area looked perfect for skating because of its flat, open space, smooth concrete and abundance of obstacles to skate on, says Terc. At first, Terc explains, there was no problem with the skating going on at the plaza. In his experience, pedestrians at the plaza watched from stairs as the skaters performed their tricks, and no confrontations occurred.

The rules for skating at the plaza were never specified until the ban was put into place, says Balbed. At first, she says, skaters were asked not to skate on the wooden benches, and they complied. Then, they were prohibibted from skating the stairs, then the upper levels of the plaza. Balbed emphasizes that if the rules had been made clear initially, skaters could have gotten the word out and made sure to follow the rules. She suspects that the plaza had no intentions of ever allowing skaters, speculating that the engraved signs prohibiting skating at the plaza would have taken more than a few weeks to be created and must have been ordered before the plaza was finished. She feels that DTSS officials allowed the skaters to break the rules in order to justify the ban. "They made a show of pretending that they were going to let us skate there, and then acted as though it was we who blew it,” she says.

Terc, too, anticipated the ban. He and Anderson both attended a meeting on public space with Rodriguez, and neither was impressed with the Civic Center's attempts to accommodate the skating community. "They say [the Civic Center] was built for kids, but it wasn't built for the kids who really come to Downtown Silver Spring and do what they want to do,” Terc says. Rodriguez cites damage to the property, including scratches on railings and wooden benches and potential problems with the plaza's ice rink, as a reason for banning skating, adding that the plaza simply was not intended for the activity. But Terc is skeptical of this reasoning, since he has not seen damage to the extent that Rodriguez and other representatives of the center describe.

Despite frustration on the part of the skaters, Rodriguez emphasizes his commitment to supporting the skating community as much as possible. The activity is not the problem, he says, but finding the appropriate venue for it is not easy. However, he hopes to avoid betraying the skaters, who are a large and integral part of Silver Spring. "These are people in our community who love this activity, and we're wrking with them to find the best solution,” he says.

Balbed, Anderson and Terc are skeptical of Rodriguez's claims. At one of the town hall meetings that Anderson attended to talk about skating, he noticed a lack of respect from the adults present to the teens at the meeting. Security outside the Civic Center, where the meeting was held, turned skaters away, and one woman at the meeting accused Anderson of taking too many of the cookies provided for the people attending. 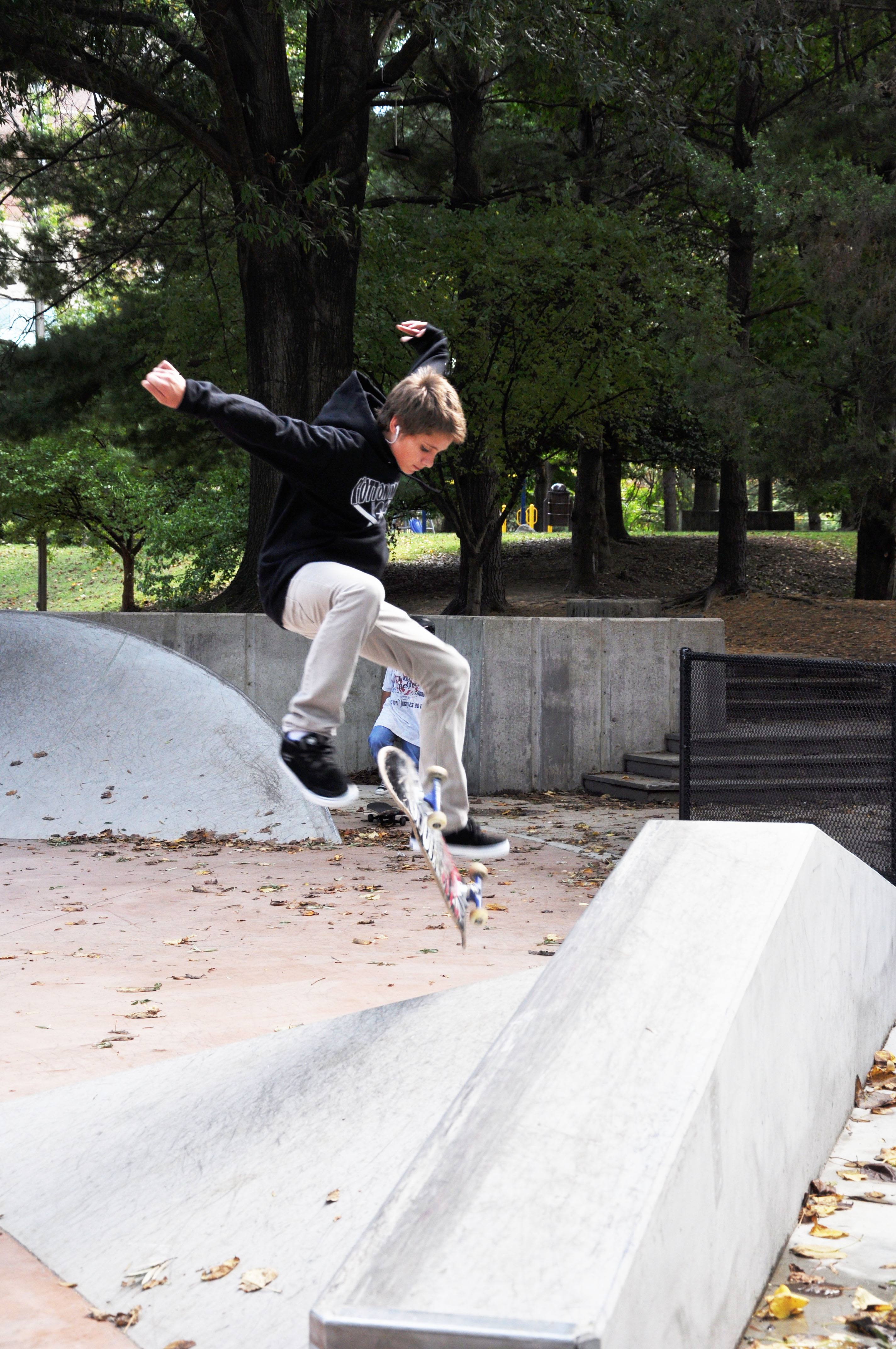 Photo:
Balbed is frustrated with the officials' inability to respect and negotiate with the skaters. She says that despite the skaters' impressive level of organization and dedication, Silver Spring is not used to dealing with them because they are not an official group or nonprofit with adult leaders. "They don't know how to have a relationship with these teens,” she says.

According to Balbed, teenagers have long been blamed for crowding the downtown area and causing violence; teens were held responsible for the mass fighting on Ellsworth Drive in May 2009, when in fact, Balbed says, adults played a large part in running the concert where the incident occurred. This stigma is frustrating, she says, because it has kept adults from hearing the skaters out in their request for a place to skate. "It's really disgusting to me the negative attitudes towards teens in general that are so prevalent downtown,” she says.

Negative attitudes have not yet stopped the skaters from doing what they do. But they still face a lack of skate spots, and there is not yet a solution in sight. The newly-built skate area in Woodside Park has not satisfied the masses of skaters who frequent it. Now the most secure place to skate in terms of not being kicked out, Terc says that he skates regularly at the park, which is not large and often crowded.

According to Anderson, Silver Spring security has cracked down even harder on skaters since the opening of the park. Security sends more and more skaters to the park when they get kicked out of other skating spots, a cause of the extreme overcrowding. While skaters don't have to worry about being booted from the park, Anderson says, the volume of people skating there makes dangerous crashes between skaters inevitable. "I wouldn't even call it the safest place to skate,” he says.

Additionally, Anderson adds, the Woodside skate park is tucked behind a basketball court and surrounded by trees, a secluded area that lends itself to crime. The skaters feel that they are at risk—a friend of Anderson's was robbed at the park - and violence involving skaters has become a hot-button issue. According to Anderson and Terc, a recent fight between a skater and a basketball player at the park resulted in the basketball player getting injured and gave the area's skaters an undeserved reputation for violence.
Rodriguez acknowledges that the park is undersized and below the skill level of some teenage skaters. A plan is currently in the works for a new, much larger skate park to be built next spring behind Takoma Park Middle School, about a half mile away from the downtown area, he says. He is also soliciting ideas from the Silver Spring community that would help skaters have more places, and more appropriate places, to skate in the area.

While some Silver Spring officials do hope to advocate for the skating community, many skaters remain indignant. They are constantly pushed around and have no standing in the area, Terc asserts. If the debate about Veterans' Plaza comes up again, Terc intends to speak out, and rally his friends and peers to do the same. Until then, he and Anderson plan to stay on their boards and on the streets, refusing any who try to push them off.