A web-based version of the Ride On Real Time app has accurate bus arrival times and replaces its flawed mobile app counterpart.

Whether a student uses public transportation to commute to school, work or special events, they undoubtedly agrees with junior Lawrence Tang's frank conclusion of the Ride On Real Time app: "[it's] quite janky." Students reach such a consensus regarding the app because it blatantly fails at the very functionality it promotes. As its name implies, the main point of the Real Time app is to display the locations of Ride On buses in real time, but the app is nothing more than an inaccurate bus schedule.

Sophomore Leela Mehta-Harwitz has used the mobile bus app and suffered from its inaccuracy for over a year. "Just yesterday it [the app] said the 16 [bus] was coming in 22 minutes, and then I missed it because it came thirty seconds after me opening the app… it's not that reliable, so I always show up ten minutes early if I can help it," Mehta-Harwitz says. The "Realtime" option on the app claims to track each bus's location in real time, but Mehta-Harwitz's distrust of any arrival times displayed on the app reveals only an empty promise.

On Nov. 1, The Montgomery County Department of Transportation (MCDOT) replaced the outdated and inaccurate mobile app with a web-based version of Ride On Real Time, which utilizes GPS technology to track Ride On Buses and refreshes the buses' locations every few seconds to give users an accurate reading.

MCDOT acknowledges how inaccurate their mobile app is, choosing to advertise their new website with, "Finally an answer to the question, "Where's my bus?"" With the new website, students will receive the precise location of their bus, a major improvement from the mobile app estimations Junior Francesco Berret describes, "[The mobile app] is decently helpful for overall estimates, but I don't think I've ever seen it be completely accurate within a minute or two."

The website's interface is simple and a bit outdated, including only the options and visuals essential to the website's function. Regardless of the website's lack of aesthetic appeal, it is intuitive, with descriptions on what to enter into each text field and a map to help users track their buses, and upon usage, the times displayed on the site seem to align well with the actual bus departure and arrival times. "The interface is kind of annoying, but it looks like the times are accurate," Mehta-Harwitz says.

The site allows users to input their initial and ending streets or intersections to find information on which routes and buses to take to their destination. Unless these users also take the public bus regularly, however, using Google Maps to plan their routes would be quicker and easier. 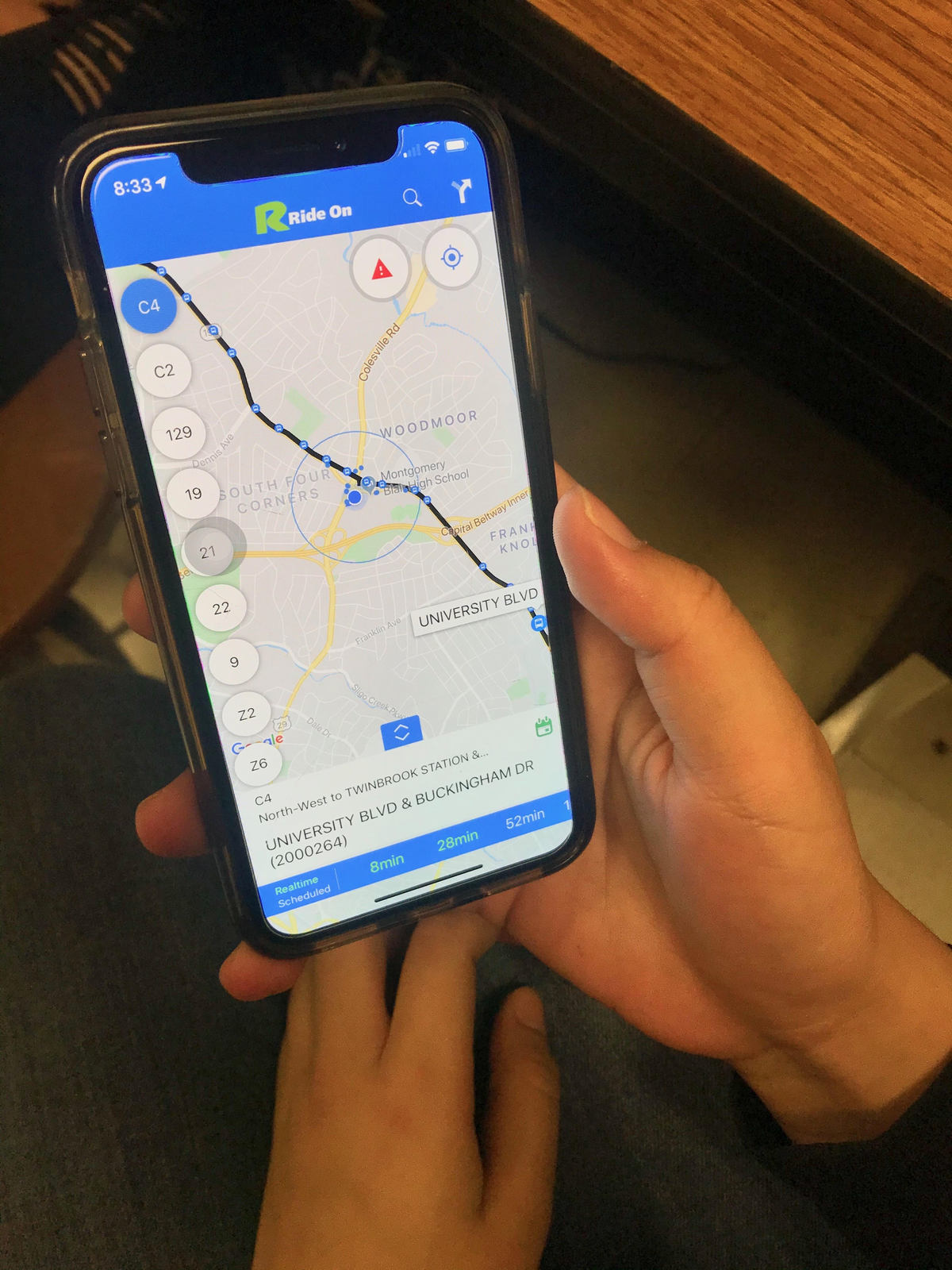 Photo: A web-based version of the Ride On Real Time app has accurate bus arrival times and replaces its flawed mobile app counterpart.

Photo: A web-based version of the Ride On Real Time app has accurate bus arrival times and replaces its flawed mobile app counterpart.

Google Maps displays the exact times as the Ride On website, except the former has more user-friendly features to help users navigate through bus routes. Maps lets users search up broader destination and arrival locations - such as restaurants, businesses, or stores - rather than requiring users to input in specific street names and intersections.

The website is more convenient to regular bus riders than to riders who may use public transportation sporadically. It gives users the option to focus on the activity surrounding a specific stop or area without having to input a destination, which benefits students who already know what bus they want to take. Overall, the website does its basic job well: it accurately predicts what time the bus will come - a massive improvement from the mobile app's Realtime feature.