Half an hour before show time, the crowd in the food court of the first floor was still sparse. By 7 p.m., fans young and old could be seen all the way on the fourth floor trying to get a glimpse of the young Barbadian singer whose debut song "Pon De Replay" was number two on the Billboard charts for a greater part of the summer. 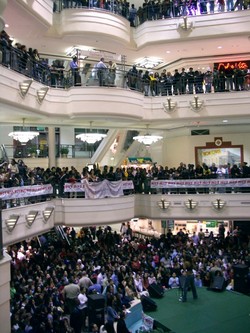 Photo: Hundreds of fans, including many Blazers, filled the floors of city place to get a glimpse of Rihanna's fundraising performance.

Photo: Hundreds of fans, including many Blazers, filled the floors of city place to get a glimpse of Rihanna's fundraising performance.

Hot 99.5 was conducting a bracelet drive for victims of the recent hurricanes and got in contact with Rihanna's label, who said they wanted to include the station and D.C. Metropolitan area fans in their Secret Body Spray Tour, according to Hot Morning Mess co-host Mark Kaye. Kaye added that Rihanna told Hot 99.5 that if they sold all the bracelets in their possession, she would perform for free. "Everybody won. The fans won, the hurricane victims won and we won," said Kaye, who believes that of the 9,000 bracelets Hot 99.5 had for sale, 99 percent were sold. A $6,000 check — the total from bracelet sales — was presented to a Red Cross representative during Rihanna's performance.

When Rihanna appeared in a purple halter-top and loose fitting jeans, surrounded by police, about 15 minutes before showtime, fans rushed to get autographs, take pictures and talk to the star. In the crowd, arguments ensued as to who were her greatest fans. The excessive screaming died down as she disappeared behind the red background of the makeshift stage. Free candy and t-shirts were thrown into the crowd to appease fans awaiting Rihanna's return.

The hosts of the show, Kaye and Kris Gamble from Hot 99.5's Hot Morning Mess, came out to warm up the crowd. The warm up concluded with two questions from Kaye: "Are you ready to hear some live music?" and "Are you ready to see Rihanna?" Both were answered with screams. Kaye and Gamble disappeared behind the same red wall and the audience was left in want once again as it took Rihanna a few minutes to appear.

Rihanna was preceded by two dancers dressed as camera phones. Disposable cameras could be seen above many heads. The opening song was a cover of the reggae classic "You Don't Love Me (NO NO NO)" followed by her second single, "If It's Lovin' That You Want." All the while, Rihanna executed the same choreographed movements as the dancers behind her. During the song, Rihanna paused momentarily to tell "Washington" that she was "so glad to be here right now," though her voice could hardly be heard over the boisterous bass of the background music and the teenage boys confessing their love to her.

The next song was "something special," according to Rihanna, who, after a short break to thank Secret Body Spray for bringing her on tour, began to sing a new upbeat tune, which was well received by the audience. This number's end brought on Kaye and Gamble again, who announced Rihanna's movie and made the check presentation. The performance proceeded with Rihanna singing choruses of songs by other artists such as Kanye West, T.I. and Sean Paul. Rihanna's finale was her most popular song, "Pon De Replay."

By 7:30 p.m., Rihanna was whisked away by a police escort, followed by the dispersal of the crowd. The general consensus after the show was that it was "alright," as sophomore Aaron Davis put it.