A problem without a simple solution

For most upperclassmen, winter break is about scheduling fun around college applications. But even once those acceptance letters start rolling in, the stress of payment is only beginning.

In a time when the economy has officially entered into a recession, when state and local budgets are in serious deficit, when jobs are being lost by the thousands, when families are losing their homes to foreclosure and when a federal bailout plan has yet to demonstrate its success, the rising costs for college have never been more overwhelming. 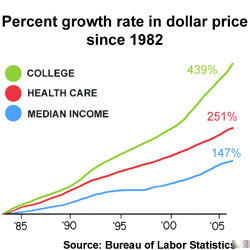 College tuition and fees have increased by 439 percent since 1982, while median family income has only risen 147 percent, according to a December report from the National Center for Public Policy and Higher Education (NCPPHE). Student borrowing has more than doubled over the past decade. Low-income families receive less financial aid from colleges and universities For example, although 36 percent of families earning less than $20,000 receive $4,700 in financial aid, 29 percent of families earning more than $100,000 receive $6,200 in financial aid. U.S. leadership in college enrollment has slipped to seventh in the world, while Korea, Greece and Poland are leading the pack. As the education gap between the baby boomers and the younger generation widens, many fear that the U.S. will lose its status as a leader in the global economy in the near future. And the only way to prevent that from happening is to allow easier access to college by reducing tuition and fees.

In order to tackle the problem of rising college tuitions and fees, we must first understand why they have been rising. Clearly, college costs do not follow the normal laws of supply and demand - otherwise, tuition should stop rising because families would cut back on enrollment, similar to the reduced consumption of gas at four dollars a gallon. A more feasible explanation lies in the increasing demand for young adults in the workforce with a college degree. With that said, the price becomes the default measurement of the worth of an education. The more expensive the college, the better the education it presumably provides. And if the parents believe that their children are receiving a more valuable education, the more they will pay for it. After all, why should colleges such as Harvard or Princeton charge any less than $50,000 a year if they are accepting less than 10 percent of applicants? The sheer nature of a degree at those colleges is the force that drives prices up.

Although there is hardly any incentive for elite institutions to lower college costs, there is evidence that many universities are spending their money in superfluous ways in order to attract more applicants. These wealthy institutions, engaged in a luxury arms race, have started to spend more and more on extravagant dormitories, cutting-edge fitness centers, and stylish dining halls. Princeton University has its $136 million student residence and Boston University cherishes its 35-foot climbing walls and hot tubs large enough for 15 people. If these top-notch universities would ease off a bit on fancy decorations and lavish comforts, they could make it more affordable for students - after all, it is the education that matters most.

But a more plausible way to deal with the rising costs is to pay for a college you can afford. The net cost at a four-year private university amounted to 76 percent of the median family income, while the net cost at a four-year public university amounted to only 28 percent of the median family income, according to NCPPHE. Looking at it in another way, the average annual cost for a private college is roughly $140,000 over four years, according to the College Board, while the average annual cost for a public in-state school is $61,000 over four years. Even better, two years of community college, followed by two years at a local four-year school, amounts to an average cost of $22,500. Doing well on Advanced Placement tests can save a student up to $16,000, the equivalent of one semester in college.

Clearly, there is no simple solution to the skyrocketing costs of a college degree. But if both universities and students play their parts in making colleges more affordable, the U.S. may well be on its way in regaining the ground it has lost in the global economy.