Michelle Roberts decided in high school that she wanted to teach music. Sitting at her desk, Roberts gives an amused yet somewhat cynical laugh as she recalls her band director's warning. Shaking her finger, Roberts does an animated imitation of her teacher. "You know it's a lot of work, but I'm telling you, it's a lot, a lot, a lot of work," Roberts says in a stern voice, before breaking down into laughter.

And her band director was right. 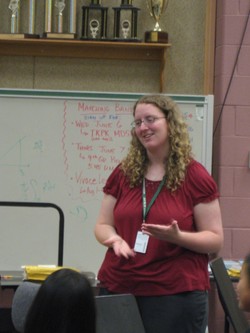 Photo: Music teacher Michelle Roberts gives her students in Concert Orchestra options on how they want to end the school year.

Photo: Music teacher Michelle Roberts gives her students in Concert Orchestra options on how they want to end the school year.

With no previous teaching experience other than student teaching for eight weeks in both an elementary school and middle school, Roberts entered Blair and started her career teaching five different music classes. Currently she only has one block period and her lunch everyday to plan for her five classes. "In the beginning of the year, I came in on Saturdays to work but stopped because this was going to kill me if I kept it up," says Roberts.
To keep organized, Roberts makes lists and keeps calendars. Her May calendar is crammed with small color-coded writing for almost every day. "I can't even read that," laughs Roberts.

One of Roberts's many challenges was her Music Technology class, which required Roberts to create her own curriculum based on a general previous curriculum. "The fact that I wasn't familiar with most of the stuff I was supposed to teach made it hard," explains Roberts. "I had to learn the ins and outs of all the programs, be able to teach them and stay a couple steps ahead of the kids."

But Roberts's biggest hardship wasn't learning all the material. "The hardest part was figuring out a way to present the material and make it easy it understand," says Roberts. To make things interesting, Roberts included creative assignments such as having her students create an old-time radio broadcast show.

Apart from planning for her classes, Roberts also took over three extracurricular activities during her first year: marching band, pep band and the pit orchestra.

She began in August at a camp to teach new members of the Blair marching band basic marching skills. The marching band requires Roberts to attend every home football games, adding flavor to her life. "It gives my Friday nights a little bit of excitement," says Roberts.

As the year progressed, Roberts went from conducting the band during rehearsals to becoming more of a supervisor instead. "I try to pass the conducting onto the drum majors because they'll be the one conducting in the performances," explains Roberts.

After football season ended, Roberts formed a pep band. The pep band consists of volunteers from the marching band and plays during home varsity basketball games for both boys and girls. The band was a success, and Roberts hopes to continue it next year. "I can see us expanding and going to a couple of games for other sports," says Roberts.

While Roberts was working with the pep band, she also conducted the pit orchestra for the 2007 school musical, "The Pirates of Penzance." As this was her first time conducting a pit orchestra, Roberts gained a few insights. "Just being able to see the interaction with the actors on stage and the orchestra below and seeing how it all fits together was cool," says Roberts.

As a student from Montgomery County, Roberts has the unique ability to see things from the eyes of a student and a teacher. Looking back, she realizes that students seem to take everything for granted and "go with the flow," without realizing the work teachers put in. "There's a lot of paper work and behind the scene stuff that has to get done," says Roberts, "like planning for festivals or contacting people for marching band. It's just a lot of administrative work that comes with the job."

Even with only one year of teaching experience under her belt, Roberts feels a sense of duty to her students. "I want my students to want to continue to make music at least for themselves and to want their kids to learn music as well," says Roberts.

No matter what Roberts may meet down the road, she will always stand by her theme: "Make it work!"