"Rock of Ages" fails to rock

An awkward combination of a good cast, cheesy musical numbers and an overload of promiscuous scenes.

The two minute trailers for "Rock of Ages" lacked a plot and were filled with snippets of musical numbers: the full movie is 123 minutes of just that. With random outbursts of old rock songs and a disarray of unclear storylines, there is not a defined plot in "Rock of Ages," but the theme, however, of true love and immortalizing rock music is actually inspirational.

Not unlike the entire movie, the acting was overdone and awkward at times. Love scene after love scene, Jaxx develops into an unappealing and inappropriate seductress that belongs in an R-rated movie. The pointless characters, such as the woman who hires Sherrie as a stripper (Mary J. Blige) and Barnett are just there to have an all-star cast. However, Russell Brand is one of the only comedic aspects of the movie, along with an arbitrary monkey named "Hey Man," who appears in some of the scenes with Jaxx.

For those who want to see a nice, enjoyable family movie, choose another one. Apart from being cheesy and inappropriate, the movie is also very predictable. It's a typical musical, and a typical love story; they fall in love, break up, and reunite just in time for the last musical number. 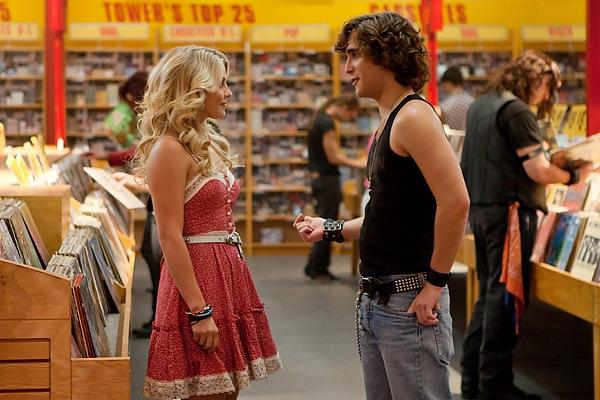 Photo: Drew and Sherrie meeting each other for the first time.

Photo: Drew and Sherrie meeting each other for the first time. Photo courtesy of Arkandseek.net.

Even though the abrupt yet totally expected breakouts into song are frequent, the rock fans will enjoy the soundtrack and will want to sing along, because the movie has a good selection. The Journey song "Don't Stop Believing" is pretty much the theme song of the movie. There are many other hits as well; most of the soundtrack includes Journey hits and Foreigner hits but there are a couple songs from Twisted Sister, Def Leppard, Twisted Sister and Poison.

Apart from the song selection, the singing is decent. The main characters, Sherrie and Drew, are good, but not the best in the movie. Blige, though her role is insignificant, is one of the best parts. She lights up the theater with her singing of the songs "Harden My Heart" and "Shadows of the Night," which she sings alongside Sherrie.

"Rock of Ages" is a poorly structured movie without a strong, unforeseeable plot line and entertaining characters. It is definitely not a blockbuster, and not a movie worth wasting 11 dollars on.

"Rock of Ages" (123 minutes) is rated PG-13 for some mild action and rude humor. Now playing in theaters everywhere and also available in IMAX.