Rockets reach the end of their fuse against Blazers

Blair's JV field hockey team scraped by with a 2-1 win against the Richard Montgomery Rockets in double overtime on Thursday. The two evenly matched teams were tied 1-1 for a majority of the game, but the Blazers' strong offense pulled through in overtime and brought their record to 2-1-1.

Blair started the game a bit flat-footed, but quickly responded to RM's pressure by repeatedly driving the ball down the Rockets' center. Sophomore Lily Alexander aggressively controlled the midfield, quickly and repeatedly delivering the ball to the offense. Despite Blair's scoring opportunities, a combination of luck and the skill of the Rockets' goalie resulted in the deflection of six shots in the first half. 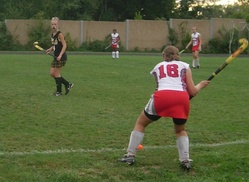 The Blazers came out in the second half aggressive and determined to translate their dominance over the Rockets from the field to the scoreboard. Alexander's hard efforts in the midfield soon paid off when freshman standout Lauren Rust took advantage of Alexander's long pass and put the ball in the back of the Rockets' net.

The Rockets responded quickly, penetrating Blazer territory and taking a few shots on goal. After a few misses, a miscommunication in the Blazers' defense allowed the Rockets' to tie up the score with two minutes left in the game.

With overtime looming, RM's goal seemed to leave Blair in a haze. The Blazers' chemistry fell apart and they barely held up against the Rocket offense. With the score tied at 1-1, the game was forced into an extra period.

In overtime, the Blazers' were back in scoring form. With renewed energy, Blair dominated the field constantly finding new ways and opportunities to shoot the ball. But, defense dictated the pace of the period--both goalies deflected all shots on goal.

With one minute left in double overtime, Blair refused to give up. Junior captain Adelaide Waldrop hit a perfect pass to a group of Blazers in front of the Rockets' goal. In the rush to the ball, RM's goalie fell over and illegally placed her hand over the ball. Although this typically results in a foul stroke, the referee allowed play to continue and junior captain Jenna Craver to sink the ball past the sprawled goalie and into the net, ending the game 2-1.

Coach Nina Hagan described the game as "good, intense, and well played." She commended the hard, solid performances played by Blake Morgan-Gamber and Lily Alexander which "kept the offense going." She also acknowledged the team's efforts as a whole. "The girls also played really well in overtime and put it all out there" she said.

Junior captains Adelaide Waldrop and Neva Bowers agreed that at first the girls had trouble getting situated. "At the end of the game, we showed how good of a team we have this season by pulling through," said Waldrop, "but we still have room to improve." "Even though we have already improved so much– we will only continue to grow and get even better as the season continues," added Bowers.

The Blazers' next home game is Monday, Sept. 24 against Rockville at 5 p.m.