Rockin' around the clock 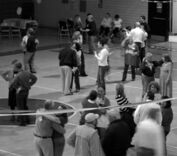 Photo: Alumni from the 1960s reconnect in the old Blair gymnasium as part of the weekend of celebrations. The sock hop was one of the many reunion-style events.

Photo: Alumni from the 1960s reconnect in the old Blair gymnasium as part of the weekend of celebrations. The sock hop was one of the many reunion-style events.

I was tempted to check my cell phone to make sure that it was still 2009. But, no, it wasn't time travel - it was the classes of the 1960s reuniting for a sock hop.

Susan McQuay, '69, organized the sock hop, which took place on Saturday, Oct. 17, from 8 p.m. to midnight. According to McQuay, sock hops became popular in the 1950s and were commonly held in school gymnasiums. Their name was coined from the strict requirement that no shoes were to be worn while dancing, although socks were acceptable footwear.

Each of the 10 graduating years was represented at its own table, arranged along the sides of the gym. The grads grouped themselves near their own class tables, reminding me of the packs of Blazers in each different grade roaming Blair's hallways today.

Each class had posted photos on the walls, mostly old sports spreads from Silverlogue. Bruce MacDonald, '68, proudly pointed out a photo of himself playing football, a pastime that he enjoyed thanks in part to the enthusiasm of his coach. "We played on Saturdays, but we had [team] meetings on Friday nights. Coach Puglesi would fire us up. If it were legal, we'd kill someone, we were so fired up," he said. I would have run to the other side of the room, but I realized that the fiery attitudes had receded along with the hairlines.

The class of '62 had many of their Silverlogue pages in black picture frames, and colored reunion photos scattered on their table. Alums exclaimed over their photos, pointing out old hairstyles and fun events to spouses and friends. "Remember this?" became the catchphrase of the entire evening.

Attendees danced sporadically throughout the evening, as few individuals were willing to tear themselves away from their friends and conversations. 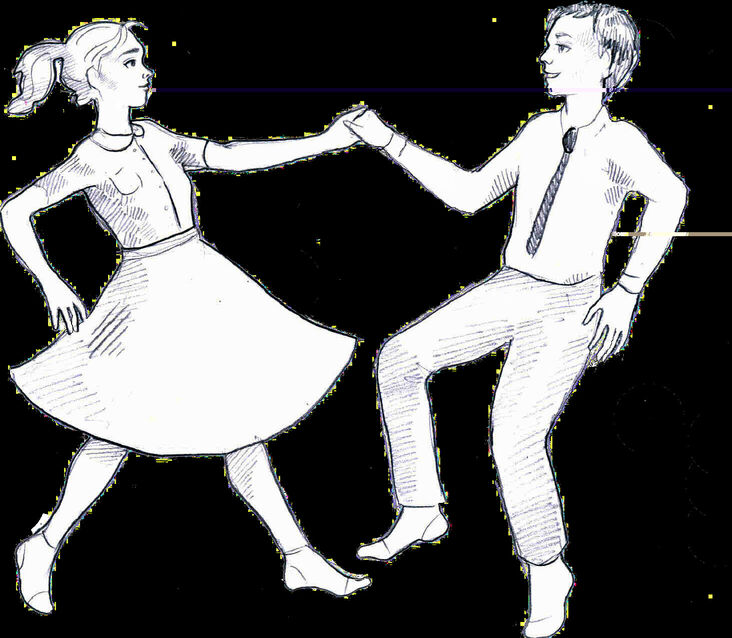 Photo:
In one line dance, three men and five women participated, allowing the gentlemen to dance with more than one lady. Watching the hilarious gender mismatching on the dance floor reminded me of the awkwardness of high school coupledom. The sock hop turned out to be more of a good ol' reunion and less of a dance. A real reunion - complete with the standard "Did you hear that she married a lawyer?" comment that floated into almost every conversation.

The main subject matter of conversation, though, was Blair itself. Dan Eberly, ‘60, noted that athletics were very important to the school, especially football and basketball. He remembered growing up on Flower Avenue and hearing the sounds of cheering and the marching band from his home. "Even before I went to Blair, I used to sneak down and watch [the athletes] play," he said.

Harriet Golden, '71, enjoyed that Blair was its own community. "Everybody went to Blair," she said. "It had a small-town feeling." Of course, that feeling left Blair with the graduates. While I suppose it could still be said that most everybody goes to Blair, it's certainly nothing like a small town. With somewhere over 2,600 kids, I know that there's a greater chance of me acing calculus next year than knowing everyone who goes to school with me.

Though there wasn't a surplus of dancers and no one actually took their shoes off, everyone seemed to have an excellent time greeting old friends and making some new ones. I enjoyed listening to the alums reminisce about their time at a school that doesn't seem to exist anymore.