Rockin in the halls

An administrative odyssey into the world of music

Editor's note: All references to the administration are fictitious and used for a humorous purpose only.

Yes, we've all heard them: The lyrical wonders and musical creations that assault the auditory senses every morning as students diligently wait for their classroom doors to open, or as they not so diligently await the bell to tell them they need to haul it to their first block. Like a phantom Michael Jackson, "ABC" follows students to class, Kool and the Gang's "Jungle Boogie" draws the denizens of the hallways into their respective classroom settings and all manner of other golden oldies mentally stimulate students for academic achievement.

Hoping to expand the already diverse musical selection so that Blair's wide audience will be more receptive, the administration is reportedly looking into adding a more modern set of songs to be blared through the PA on a daily basis. Eventually, the administration hopes to enhance the auditory experiences of Blazers with selections from popular rap, hip hop, techno and hard rock artists. 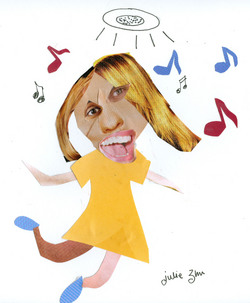 Dancing in the hall

Photo:
To ease the transition, the administration is considering playing select Q-Unit tunes first. "We Will Rock You In Da Club," a re-mix of the iconic Queen song "We Will Rock You" and the popular 50-Cent rap hit "In Da Club." The general feeling is that the blending of Queen's classic rock with 50 cent's gritty lyrics will allow students to make the transition from old school to "bust a fool" with no trouble.

To facilitate a meaner, more aggressive attitude during home football games, the administration is also researching at the trip-hop and techno beats of songs like The Prodigy's "Spitfire." A pile-driver mix of severely distorted guitar and screaming vocals, the song also features educational content on The Second World War, in accordance with MCPS rules about multimedia that can be shown to students. In addition to its educational value, the song is capable of massively stimulating a person's adrenal gland, giving Blair athletes the much needed edge over under-motivated opponents.
The Queens of the Stone Age's hard rock "Suture Up Your Future" is another tune with a powerful educational message that might soon be coming to a speaker near you. Aimed towards students who wish to achieve more in school, the song focuses on the idea that only they can "suture" up their "future" and make a better life for themselves. It's also a deep bass-line driven rock song, with many a vocal flourish and guitar solo.

In addition to these current changes to the music selection, the administration has plans to enhance the sex-ed curriculum with uncensored versions of songs like the trendy rap single "Laffy Taffy" by D4L and Dream Theater's psychedelic "Home."

In an effort to work more closely with the SGA during Homecoming week, there are also plans to blast the recent hip-hop sensation, "Crank That (Soulja Boy)." The administration is looking to translate the "best PSAT scores in the county" mantra established during PSAT testing from the area of academics into dance. These efforts are hoped to result in Blair receiving the coveted title of "most hip-hop school in the county." Students are expected to practice the signature Soulja Boy routine during the morning minutes, in order to increase the participation of the student body during the Homecoming dance. According to the administration, the same rules as for the PSAT apply for "Soulja Boy":

1. Get a good night's rest and eat a complete breakfast. The Soulja Boy dance is notoriously tiring and students will need all their sugar reserves to perform it at Homecoming.

2. Get to school on time. Late attendees to the dance will not be able to perform the routine in unison with the rest of the dancers and will lower the school's overall hip-hop participation score.

3. Do your best. Didn't pay attention to the music video, your friends or the how-to article? Wing it, and hope you don't fall on your face while doing the "Superman."

So, instead of catching up on homework, listening to the latest gossip or harassing your sleeping classmate, listen close and take it in as the PA tries to play on Blair's diversity by ear.