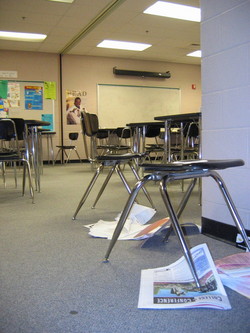 Mouse in the room

Photo: Room 167 was left in disarray after a hasty evacuation of students who spotted a mouse.

Photo: Room 167 was left in disarray after a hasty evacuation of students who spotted a mouse.

A mouse was sighted in room 167 during English teacher Jeanette Simmons' seventh period class this last Wednesday, April 27. Screams from the room were heard quickly after the sighting, and the class was evacuated and sent to the gym to vote in the Student Member of the Board elections.

The screams were the result of a tiny mouse making an unexpected appearance after scurrying over Simmons' feet. According to National, State and Local Government teacher Lansing Freeman the screams resonated throughout the surrounding hallways. "I was in the CAP office [room 145], and I heard [the screams]," said Freeman.

Junior Stephanie Alfaro, one of the students who remained seated and calm during the incident, noted the frantic nature of the class after sighting the mouse. "All the girls were screaming," said Alfaro.

According to Alfaro, the students hopped on the tables and chairs to avoid the mouse. Some students, such as junior Segen Beshir, jumped from tables to chairs to the door in order to evacuate the room.