Rolling in the dough

A woman sweeps a brush across a set of cheekbones, adding color to an otherwise ashy complexion. Next comes a rosy blush, followed by a shimmering eye shadow to accentuate the eyes. Such is the work of gym teacher Brooke Franceschini, who doubles as a beauty consultant at Mary Kays to earn extra money and empower women to feel confident about their appearance. 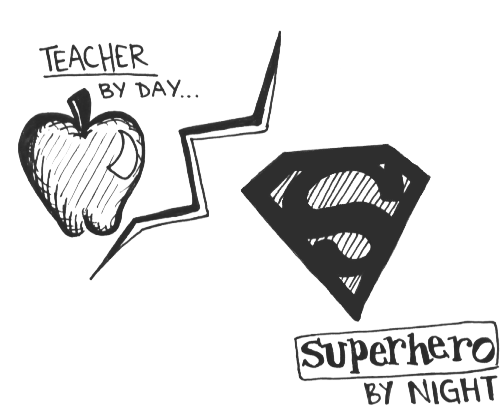 Photo:
Like Franceschini, many Blair teachers take on additional jobs to supplement their income and to engage their interest. In fact, 16 percent of teachers hold jobs outside of school, according to a 2008 report by the Department of Education. With the average secondary school teacher earning only $42,783 a year amidst a tightening credit market and predictions of rising inflation, some Blair teachers rely on the income earned from secondary jobs to pay the bills and provide for their families. For many, it is also an opportunity to escape the stress of the rigorous workweek and become absorbed in diverse hobbies and interests.

Toiling in the soil
NSL teacher Marc Grossman, for example, spends five to six hours each week from May to November planting, harvesting and selling organic produce that he grows on land leased near his house in Olney, Md. "We've been a certified organic farm for three years now. That means we don't use any petroleum-based chemicals," he explains. "We have a focus on vegetables that taste good. It's also important that we grow sustainable and environmentally-friendly products."

Grossman, who tended to a family garden growing up in Columbus, Ohio, first became interested in agriculture when he lived in Bolivia as part of the Peace Corps. "I got a sense for the critical role agriculture plays in society," he recalls. After returning from Bolivia in 2000, Grossman took a job at an organic farm in Ohio. "Originally, after working a season and seeing how hard we worked I thought it was insane," he says. "I told myself I was never going to do this for a living. But I kept growing seeds."

Senior Helder Hernandez, hired three years ago to help Grossman tend to and sell his organic produce, can attest to the backbreaking labor that makes the sale of these popular organic products possible. "You can't use normal dirt - you have to make it," Hernandez says, referencing a process that takes hours.

Although his organic farming enterprise started out slowly, making only a $500 profit in the first year, Grossman now makes about $3,000 a year and plans to expand this year by forming a partnership with two other men interested in selling the produce from Grossman's farm. Grossman believes that his farm's products, which range from mixed salad to heirloom tomatoes and melons, appeal to customers at the Olney Farmer's Market on many different levels. "It tastes better, fresher and it lasts for two weeks," he says. "It's different at the supermarket - by the time you eat it, it's been sitting around for seven days."

Despite the extensive manual labor required, Grossman finds organic farming to be a welcome respite from the cumbersome and often stressful situations encountered at school. "It's fun to play in the soil," he says. "It's like putting together a puzzle to find a way to make a profit." 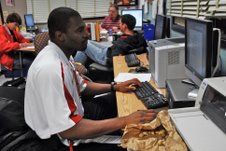 Photo: Physical Education teacher Emanuel Charles balances his teaching job with homework from the Human Development class he is taking at the University of Maryland.

Photo: Physical Education teacher Emanuel Charles balances his teaching job with homework from the Human Development class he is taking at the University of Maryland. Photo courtesy of Alex Joseph.

Known for his love of basketball and jovial demeanor, physical education teacher Emanuel Charles also holds a part-time job to support his family during the worsening economy. He waits tables at the Original Pancake House in Bethesda, a job he has kept since his high school days at Blair, to earn extra money that compensates for the two-month period over the summer when he does not receive teacher pay. "It's a refreshing change from working here all week," he says.

Fellow gym teacher Robert MacMahon explains that working at Original gives Charles a sense of accomplishment that does not always come easily working at Blair. "It's work that he doesn't have to think about," he says. "When he's there, it's easier to cope with stressful situations."

Charles has also become more attached to his job at Original because of the close rapport he has developed with a few repeat customers. "I have two families over for dinner quite often," he says. "I've known them for so long, seen them grow up and seen their kids grow from babies to eight-year-olds."

For gym teacher Brooke Franceschini, the relationships that she builds with her clients also determines the success of her part-time job. As a beauty consultant for Mary Kays, a grassroots cosmetic and skincare provider, Franceschini keeps 50 percent of the profits from any cosmetics sale and turns over the other half to the company. Drawing on her love of "girl time," Franceshini offers more than perfunctory sales assistance to her client base of 75 in her classes on the proper application of cosmetics and skin-care products. "I do skin-care classes, facials, bridal shows and color glamour, which is where I test different colors on clients," she says. "A great aspect of the company is that you teach, which comes naturally to me." 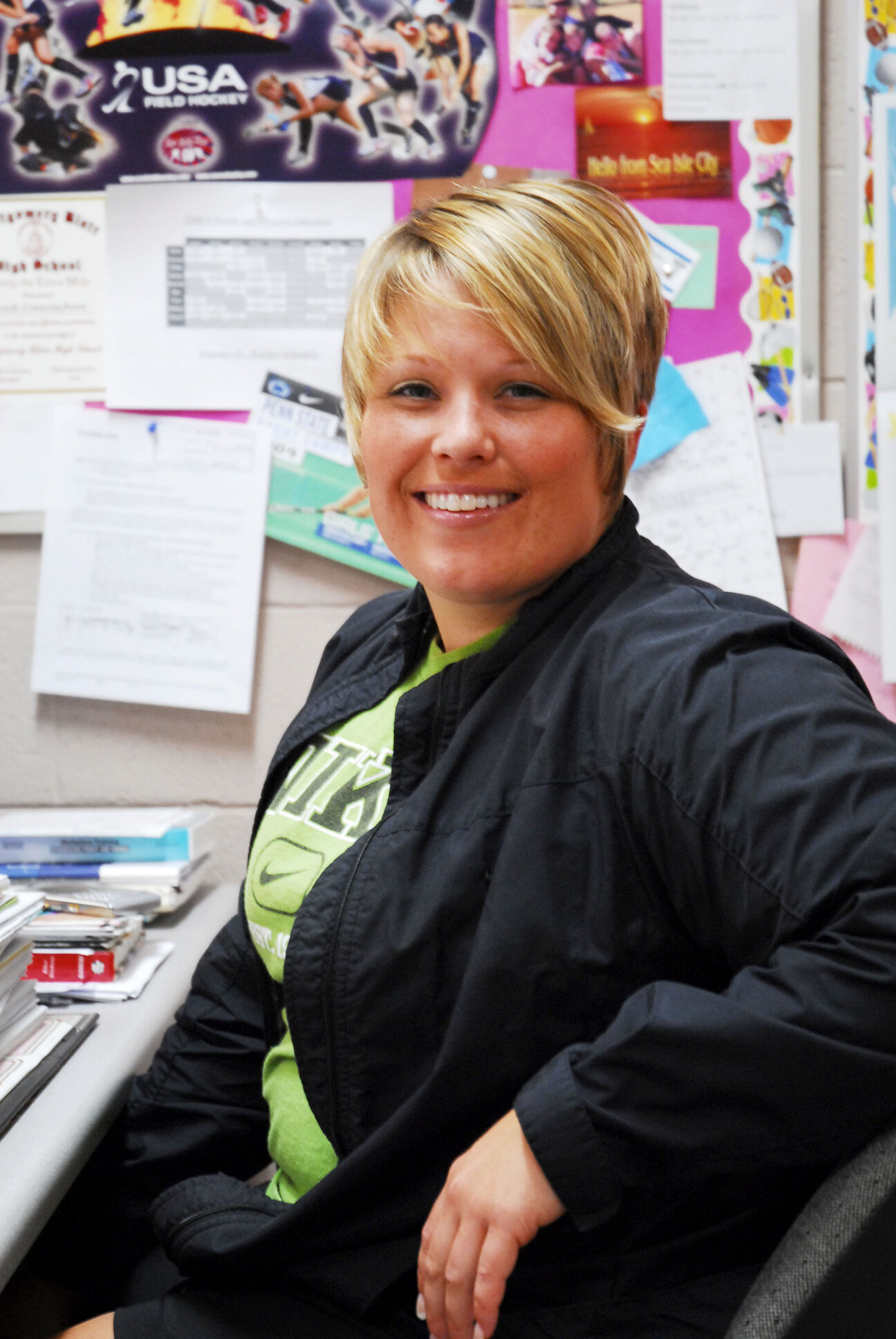 Franceschini first began working for Mary Kays one and a half years ago, when she started graduate school and wanted to earn some extra money to supplement her income. "I was at a Mary Kays party and someone presented the business opportunity to me," she says. "It's a good fit, very flexible. I can do it when I need money and work around coaching." In preparation for the beauty consulatations she offers to clients, Franceschini took Mary Kays classes to hone her techniques. "Every Monday there is a weekly meeting that specializes in something," she says. "It might be a brush-set clinic or lesson on applying concealer."

Franceschini also finds fulfillment selling products to support the Mary Kays Charitable Foundation, which puts 50 percent of the profits from a particular product towards fighting cancer and domestic violence.

Franceschini maintains that the most rewarding part of her job is boosting the confidence of her regular clients with the mere sweep of a brush or slight adjustment in color scheme. "I get to teach them about skincare and makeup so they see themselves as pretty," she says. "So they can look in the mirror and feel good about how they look."

All three Blair teachers find their part-time jobs rewarding and meaningful beyond the monetary compensation. Franceshini acknowledges that money is a motivator but maintains that her love of cosmetics and the enduring friendships she's developed keep her coming back to work every week. "Originally, I did it for the money, but as I fell into the business I started to do it for the love of the company and the opportunity to build personal relationships," she says. "I've met girlfriends working here that I never would have met before."