Robert F. Kennedy stadium in Northeast Washington, D.C., sits alone by the banks of the Anacostia River. It is almost in seclusion — like a secret kept only for those who care about D.C. baseball. A secret kept for nearly 44 years. RFK is a multi-purpose facility that formerly played host to both the Washington Senators and the Washington Redskins. The pockmarked bowl of old concrete and metal that, although it possessing the cozy charm of a well oiled baseball mitt, is far from a perfect sports venue by today's standards. The seats are faded from sunlight and from being absent of a friendly fan's behind for so long. The concept of a luxury box was unheard of when RFK was built in 1961. Today, RFK is a tape player among iPods in the realm of ballparks, but a classy tape player at that. However, this outdated creaky circle of cement has become as lively as any stadium since the arrival of the Washington Nationals and the return of baseball to the nation's capital. 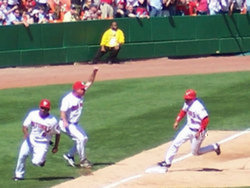 Conversely, Baltimore's Oriole Park at Camden Yards sets the standard for modern ballparks. Constructed in 1992 on the site of the former B&O Railroad stop, Camden Station, Camden Yards has everything RFK doesn't: luxury boxes, fresh seats and a field built only for baseball. The stadium integrates so beautifully into the downtown Baltimore landscape that fans can almost reach out and touch the Bromo Seltzer tower just beyond the center field wall. Camden Yards is as close to perfect as a ballpark can be. However, a question looms over the heads of baseball fans caught in and around these two completely different stadiums. It is the hardest question that every sports fan must answer: which team should I root for?

Well, it is obvious isn't it; I should root for the home team as the song says. Unfortunately, geographically, Montgomery County has Camden Yards and the Orioles to the north, and RFK stadium and the Nationals to the south. It's like being caught in one big rundown, all the way down Interstate 95.

Being the new kid in a new city is not supposed to be easy, but the Washington Nationals have made it look just that. Maybe that is why I should root for the Nationals. The Nationals were expected to arrive in Washington, receive slightly bigger crowds than they averaged in Montreal, and finish in the cellar of the National League East division, as usual. Instead of taking the route that was laid out in front of them, the Nats, halfway into the season, have taken the road less traveled, and it has made every bit of difference. Through the All-Star break the Nationals are 2.5 games ahead of the second place Atlanta Braves, and are attracting enthusiastic sellout crowds (on July 4th, the Nationals attracted over 45,000 fans). Halfway through the season, the Nationals are drawing a little more than 32,000 fans per game, 70% of RFK's capacity, 13th in the majors, and more than three times the paltry crowds they drew in Montreal. Even though the Nationals have been outscored by opponents by a count of 361-357, which usually generates a record closer to .500, they are 16 games above .500, and winners of 24 one-run ballgames midway through the season. Many of these one-run wins have been of the come-from-behind variety. You have got to love an over-performing underdog.

But while the Nationals have certainly been the surprise team so far in major league baseball, the Orioles have done their share of winning as well. Experts predicted they would finish in third place in the American League East division, behind the defending World Series champion Boston Red Sox and the always-dominant New York Yankees. At the halfway point the O's are 2 games behind the first place Red Sox and a half-game up on the third place Yankees in baseball's toughest division (six of the nine starting players for the AL All-Star team were from this division). I have to pull for a team that has always been third-best and is finally looking up. The Orioles play a different style of baseball from the Nationals. They don't play "smallball" and win games by one run. They play with power at the plate, and so far have 35 more home runs than their opponents. They boast a team batting average of .278 and 5 players with 13 or more home runs. As a fan of the game, in my opinion it is more exciting to see power baseball than "smallball." With the arrival of the cross-town Nationals, the Orioles attendance has taken a hit — down 10% to an average of 30,700. Even though attendance is down, the future looks bright for the O's, who should contend for a playoff spot. This is the team I have been rooting for my whole life.

Any way you put it, the decision of which team to root for is a tough one. Should I take the team that I've rooted for my whole life or the hottest team in baseball right now? I have to figure out whether or not I rooted for the Orioles out of obligation to root for the team closest to home or if I really loved them. Because the Nationals are closer to home than the Orioles, does that mean that I have a new home team? All are arduous decisions that must be made. One thing is for sure though, through all of the deliberations: both teams deserve fans and the future for each looks bright.