Willing herself to finish a suicide sprint at practice, Jane, a senior, clutches her throbbing temple. Her concerned teammates' blurry faces bob before her eyes. Her legs stagger, then buckle as she loses consciousness. When she comes to a few seconds later, Jane's mother is standing over her with a popsicle in hand. Jane consumes the popsicle and feels her blood sugar spike back up, replenishing some of her energy and relieving not a case of dehydration, but malnutrition; Jane had eaten nothing but a pear that day.

Jane suffers from anorexia nervosa, a potentially life-threatening eating disorder that, as defined by the National Eating Disorders Association (NEDA), is characterized by self-starvation and excessive weight loss. A study of NCAA Division I female athletes conducted in 1999 by Craig Johnson, Director of the Eating Disorders Program at Laureate Psychiatric Hospital in Tulsa, Oklahoma, showed that 13 percent of female collegiate athletes display signs of anorexia or bulimia. The same survey revealed that another 36 percent of female collegiate athletes are at a high risk for an eating disorder because of their attitudes and habits toward food.

Conversely, only 0.5 to 1 percent of American women suffer from anorexia, and only 1 to 2 percent suffer from bulimia, according to NEDA. NEDA defines bulimia as a cycle of binging and compensatory behaviors such as self-induced vomiting designed to undo the effects of binge eating. 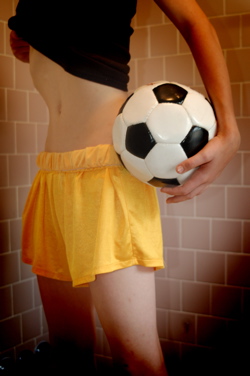 Photo:
Based on their personal experience competing on a Blair sports team during the 2006-2007 school year, only five percent of female Blazers believe that eating disorders are a problem on girls' sports teams at Blair; but 36 percent of the same athletes polled in an informal survey believe that poor body image and low self-esteem are issues that affect many girls on Blair sports teams. Poor body image and overall self-esteem are key factors contributing to the development of eating disorders, according to NEDA. These issues' prevalence in Blair athletes sends a warning sign about Blazers' susceptibility to eating disorders, which are subliminally promoted by the media.

The media negatively influences impressionable young girls, says Kathy Toepfer, a registered dietician who specializes in eating disorders and currently works for Suburban Hospital in Bethesda. Toepfer says that different media outlets "definitely [provide] a distorted perception of what a healthy body looks like. It's just constantly telling you you're too fat." Toepfer believes the media's glorification of stick-like celebrities causes many girls' self-esteem to plummet.

Jane's anorexia reflects how America's obsession with weight has carried over to the playing field. Athletes with eating disorders are common, according to Toepfer, and their numbers have risen in the past 15 years.

Athletes are most susceptible to eating disorders because of their natural competitiveness, according to the Eating Disorder Referral and Information Center, a website providing referrals to eating disorder treatment centers all over the United States. Elite athletes' determination to win can easily be transferred into a dedication to starve.

From the first day she kicked a soccer ball at age four, Jane says she has been an athlete. She competes in three Blair varsity sports throughout the school year but despite her varsity letters, she says she stills feels an unspoken expectation to be thin. "I used to be larger and it was really hard to feel like you were an athlete while carrying around extra weight," she says. Jane's self-consciousness in middle school was only the beginning of her recession into an eating disorder.

In an effort to lose what she perceived as extra weight, Jane attempted to form healthy eating habits. But her initially good intentions escalated into a compulsion. "I had this image in my head that as long as there was a pinch of fat on my body I needed to lose weight," she says. Jane's calorie-counting gradually developed into a form of anorexia, a disease that began during her freshman year and one that she says she still constantly battles today.

Athletes like Jane attempting to reach peak performance through starvation are only fooling themselves, says dietician and sports nutrition consultant Nancy Clark. "They would be better athletes if they fed themselves better…And when someone severely restricts food, he or she loses muscle, strength, and stamina. This is not the way to become a star athlete," Clark writes in her book, "Nancy Clark's Sports Nutrition Guidebook."

When she was in the tenth grade, Jane's coach noticed her rapid weight loss and confronted her. "My coach had said multiple times that he was worried about me," Jane remembers. "I just sort of shook it off. But then he went to my mom."

Jane says her mother took her to a personal trainer, who, during an initial consultation, diagnosed Jane with anorexia. Jane returned once more to the trainer for nutritional advice but did not return because the appointments were too expensive.

Some of the trainers' advice stuck. During the fall and winter sports seasons of her junior year, Jane tried to maintain good nutrition. But it didn't last. Stress from boy problems caused Jane's anorexic habits to resurface during the spring outdoor track season. When the stress peaked, Jane went a week without eating anything, losing about five pounds in six days. The results of Jane's week-long fast inspired her to continue starving herself during the school day before practice. "I basically told myself that it was hard to run with anything in my stomach," she says.

Jane's anorexia morphed into a form of bulimia as she began to stuff herself full of food every day after track practice. Her binging made her feel so overwhelmingly full that she would force herself to throw up afterward.

The bulimic episodes produced the opposite of their intended purpose, causing her to pack on the pounds instead of losing weight. "I started to gain weight as a result. I was eating so much, I couldn't get rid of [the food]," she says.

When athletes like Jane deprive themselves of necessary nutrients, they also succeed in slowing down their metabolisms, according to Patty Guay-Berry, a dietician and clinical nutrition manager at Suburban Hospital. "If one day you eat a little extra, you'll gain weight quicker," Guay-Berry says. A slower metabolic rate takes longer to burn calories, resulting in weight gain once the athlete begins eating again, no matter how erratically. Jane's stagnated metabolism was the source of her weight gain during the outdoor track season, despite her inconsistent eating habits.

Jane refers to this process as a "vicious cycle" because recovering anorexics find themselves gaining weight as soon as they start eating again. While gaining weight is healthy and positive for an anorexic, the initial weight gain shocks many back into old eating habits.

During her schedule of starving during the school day and binging and purging after track practice, Jane discovered she lacked her usual energy at track practice. "I never had the spunk to go run," she says. Her outdoor track lethargy came as a stark contrast to her winter sports season. "During [the winter sports season], I was the most athletic, in-shape I've ever been," she recounts.

Senior Anna Coughlan, co-captain of the girls' cross-country team, stresses that nutrition plays a significant role in a runner's performance. Though she usually makes sure to eat properly and conscientiously on race days, Coughlan says she occasionally finds herself feeling sluggish and slow at an after-school practice because she did not eat enough at school that day. "What you put into your body is shown by your performance," she says. "What you put into your body is your fuel to run."

Exhaustion and lethargy at practice may deter a runner from poor eating habits, but the combination of an eating disorder with intensive exercise can sometimes cut an athlete's season short. A partially torn ACL and ECL, a ruptured burser and two dislocated knees all afflicting one person at the same time sounds like a synopsis from a medical drama, but Jane suffered from these injuries as a sophomore.

Though is it unclear whether Jane's injuries resulted from her eating disorders, Guay-Berry says a starvation diet coupled with intensive training can result in a menopause-type stage in young women which puts them at increased risk of getting injured. "Once somebody starves themselves to a point where they're not getting periods, they're basically not producing enough hormones," Guay-Berry explains. "Their body believes they're in menopause, and they're at increased risk of stress fractures."

This phenomenon is known as part of the Female Athlete Triad, a trio of health issues afflicting female athletes with eating problems. Further detailed by NEDA, the Female Athlete Triad consists of disordered eating, loss of menstrual periods and an onset of osteoporosis, a condition of weak bones made susceptible to breaks or fractures because of insufficient calcium in the body.

Jane says that she has hidden the eating disorder chapter of life from most everyone she knows except her mother. "I've never been comfortable talking about it with anyone," she says. However, now that two years have passed since the worst of the disease, she is beginning to feel more open and willing to share her experiences.

Jane now designates specific time intervals for eating each meal to ensure that she eats regularly, though an inconsistent schedule on the weekends sometimes causes her to skip meals. She says that while her eating disorder days are mostly over, the pain she felt in the past is far from forgotten. "It's hard to forget and it's hard to not go back," she says.

Jane attributes her inability to move on to an underlying fear of reverting to her overweight middle school self. "I think the main reason it continues for me is [that] I'm afraid to go back to what I was," she says. "I think, in a sense, it will always be in the back of my head."