The latest Internet fad ChatRoulette is taking over with more than 50,000 participants. The quasi-social networking website is like a human version of the iPod's shuffle option. Unlike Twitter, Facebook and MySpace, ChatRoulette forces direct, face-to-fact contact with a complete stranger via webcam. Reminiscent of the nearly extinct Instant Messaging (IM) chat rooms, ChatRoulette pushes the boundaries of a wild medium - the Internet. 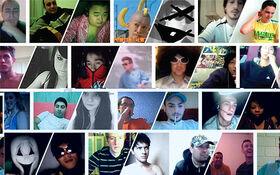 Photo: ChatRoulette is taking over the intenet by storm.

Photo: ChatRoulette is taking over the intenet by storm.

Created by 17-year-old Moscow native Andrey Ternovskiy, the ChatRoulette home page is bare and hardly ostentatious. There are a few rules and tips, options to set up a webcam and a mysterious "Play" button. The white screen is completely void of gimmicky pictures or flashy headlines. Likewise, the website appeared quietly in November of 2009 without the fanfare that preceded Facebook and Twitter.

There is no doubt ChatRoulette is addictive. It guarantees complete anonymity, a facet most Internet surfers today are obsessed with. Users can push the "Next" button simply by pressing "F9" on the keyboard to disconnect and move on to a new stranger. Participants can meet over 20 people in half an hour. The surreal world ChatRoulette creates is dizzying.

Experiencing ChatRoulette is raw and uncomfortable but genuinely hilarious. The feeling of anticipation upon meeting the next stranger likens to the excitement and dread one feels before getting on a roller coaster. The possibilities are endless, as ChatRoulette connects people from all around the world. Participants from Norway, France, Turkey and the United States have been drawn into the roulette frenzy. The "stranger" could be the giggling teenager, the masked oddball or even the unclothed eccentric.

There is always a risk of viewing obscene material on the untamable Internet. Though the Terms of Service states users to be at least 16, the site does not prevent underage children from signing onto ChatRoulette and this is definitely not the site for young children. Only time will tell if ChatRoulette becomes the next Tumblr or sinks into obscurity as just another sketchy site.