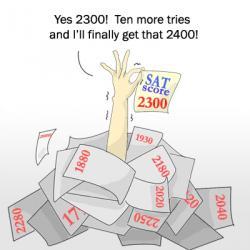 The new policy may decrease test anxiety, but it does so by diluting the meaning of student accomplishments. The College Board bills the SAT as the "best independent, standardized measure of a student's college readiness," but as the number of attempts at the SAT increase, the test's ability to measure college readiness decreases. Eventually all that's measured is how well the student knows the test. Colleges may soon see a boost in scores reported by applicants, but the question will remain: is the student ready for college, or is the student simply well-prepared for the test? Admissions officers will be forced to either drastically decrease the SAT's weight in college entrance decisions or second-guess abnormally high and thus potentially phony achievers. As a result, those intelligent enough to earn higher scores in the typical two attempts at the SAT will have their accomplishments undercut by those using the new policy to play the test like a game. If the College Board wishes to maintain the reputation of the SAT and the significance of test results, then the decision to allow test score hiding must be reversed immediately.

At the very least, the new policy should benefit all students equally. Unfortunately, this is not the case. Those in privileged positions are placed at an undeserved advantage by these changes in a testing system already skewed in favor of the affluent. A large market exists for standardized test preparation - at least, for those who can afford it. Prestigious SAT prep programs such as Princeton Review's Private Tutoring and Kaplan's Premier Tutoring cost thousands of dollars and guarantee score increases. Students from families with incomes at or below the middle-class line are unfairly shut out. Now, those with enough money to afford tutoring can enroll in not just one, but several of these programs between attempts, effectively purchasing higher test scores. These are the same students who have access to teachers that challenge them, counselors that know them and a wide variety of resources already driving their college application process. The low-to-middle-income bracket that most Americans fall into is left in the dust, compounding an already unfair situation.

In fact, under current guidelines, families below a certain income level won't benefit from the new policy at all. Although the College Board's Fee Waiver Program waives testing fees for impoverished students, students are entitled to a maximum of two fee waivers. Any additional testing must be paid for by the student, constituting a financial burden that many less affluent students cannot shoulder.

Finally, the College Board's own motives for the shift in policy are questionable. This change mirrors an already-existing policy adopted by the SAT's main competitor, the ACT exam. It's not the first time that such copycat tactics have been employed, either. The writing section of the SAT was first administered in March 2005, following the introduction of a similar section on the ACT one month prior. The ACT is also chipping away at the SAT's traditional majority. One and a half million students of the class of 2007 took the SAT, compared to 1.3 million taking the ACT. The ACT continues to make headway, increasing its student registration levels by seven percent in 2007 compared to the SAT's two percent. With such a vast disparity in the number of additional registrations, the College Board's desire to repaint its age-old product is understandable, but as a non-profit corporation, its first responsibility should be to the students, not to its bottom line.