Save the last dance

The seniors' time at Blair is quickly coming to an end. Among the exams, final projects and bittersweet goodbyes, comes Prom. The character Nova from the movie "Prom" describes prom as "the one night when nobody cares who wore the varsity jacket, and who got cut from the team. It's the night when you might find yourself singing at the top of your lungs, with people you've never even spoken to." Blair prom may not be as dramatized as this stereotypical movie prom, but it is definitely a big deal for many Blazers.

This year's Blair prom will be held at the University of Maryland's Samuel Riggs IV Alumni Center in College Park, Md. Each year, prom has a different and unique theme. This year Senior Class President Irene Ravitz and the senior class council chose "Garden of Dreams" to be this prom's theme. Decorations for this theme are a surprise according to Ravitz. 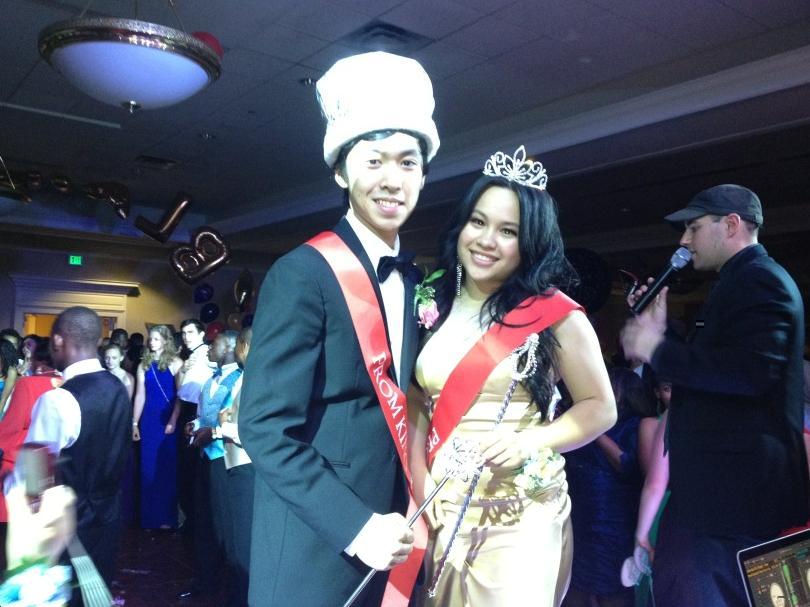 Photo: Prom royalty Bruce Yuen and Kathy Luc pose for a picture on their big night.

Ravitz, along with the senior class council, spent a long time planning prom, meeting weekly to discuss important aspects of prom. "We met in the summer, picked the theme by October, ordered decorations October [through] December," Ravitz said. They also spent a few months checking out the venue, making and folding invitations, hiring a DJ, picking out flowers, getting a message board and choosing a caterer.

Though Blair's prom is technically a junior-senior prom, most juniors (or underclassmen) usually do not go to prom unless asked by a senior. Some that attended prom as juniors found it slightly awkward being with all older students, but they enjoyed their time at the dance. "It was kind of intimidating [that I was with] a lot of seniors I didn't know. I was surrounded by people who knew all about prom and I didn't, but it was fun," senior Tom Agger, who attended prom as a junior, says. Ravitz also went to prom as a junior and felt uncomfortable around all the seniors, despite being friends with them. "It wasn't my grade so I felt a little out of place even though it was a junior-senior prom," she says.

All around Blair, seniors are frantically booking limousines for prom, gossiping about dresses and dates and planning their perfect prom night. Almost everyone unanimously agrees that prom will be more fun as a senior. "I'm excited to go as a senior because prom [will be] mine," senior Mikayla Cleary, who attended prom as a junior, says. Attending prom as a senior allows students to share the end of the year celebration with fellow near-graduates. "I think I'm gonna have more fun this year because I'll know everyone and its my senior year," Agger says. "I'm trying to keep it cheap this year because senior prom is when you do it up," junior Shelley Donaldson, who is attending prom this year with another fellow junior, says.

Donaldson has heard that prom is similar to homecoming "[It is] pretty much like homecoming but with longer dresses," she says. Cleary disagrees and feels that the two dances are not the same. "Prom felt more special than homecoming. [Prom] is where people get to celebrate the end of high school," Cleary says.

This past year after homecoming, the Blair listserve was filled with parents complaining about ‘inappropriate' dance styles. Though prom is supposed to be ‘classier' than homecoming or the black out, students still dance inappropriately at prom. Agger feels that people only grind at homecoming while at prom, "there was grinding but slow dancing too, and [there were] friends dancing together," he says. Senior Erin Hedlund, who attended prom as a junior, found that there was more traditional dancing at prom than at homecoming as well. "At prom people danced with couples more. At homecoming its like one mass of people [dancing]," she says.

Along with dancing styles supposedly being more sophisticated at prom than at homecoming or the black out, the music is rumored to be different as well. Donaldson has heard good things about the music that is played at prom. "I have heard that there's slower music at prom but it is probably the same music they play at homecoming," she says. On the other hand, Agger feels that the, "music was better at prom [than at homecoming]."

Each year after the annual junior-senior prom, Blair's Parent Teacher Student Association (PTSA) hosts an after prom from midnight to 4 a.m. After prom's goal is to keep students safe after the dance by giving them something harmless and fun to do. "After Proms save lives," says the Blair PTSA web site. All Blair senior and junior students are invited, including those who do not attend the prom, and last year over 700 students attended.

After prom is not required for all schools to do, but it is encouraged for all Montgomery County Public Schools (MCPS). Even after proms among different MCPS schools are not alike. Agger attended the Bethesda-Chevy Chase High School prom and after prom this year and found its after prom very fun. "The B-CC after prom went to Dave and Busters," he says.

Though some may think that after prom is not enjoyable because parents and teachers run it, many Blazers disagree. "I thought that after prom would be lame but it was actually pretty fun," Hedlund says. Agger even found Blair's after prom almost as enjoyable as that of B-CC. "While it wasn't as fun as B-CC after prom, I was still pleasantly surprised," he says.

There are plenty of activities to keep students occupied at after prom. "There is a lot of food and things to do. It's like a carnival for teenagers," Cleary exclaimed. Agger remembers the "blow up obstacle courses and laser tag," being entertaining parts of after prom. Even juniors that may not have had the best time being with plenty of seniors at the dance have a good time at after prom. "Last year all my junior friends that didn't go to prom still went to after prom and we all had a great time," Hedlund recalls.

Though after prom and the actual dance are two separate occasions, students found them equally as entertaining. "Prom and after prom are completely different, but I would say they are equally fun, and the experience of prom wouldn't be the same without after prom," Agger says. Cleary agrees that, "It's fun in a different way than prom," she says.

Though the actual dance is not anything like those stereotypical proms in movies, Blazers still have a great time. "There's that whole prom movie – but it's not that," Hedlund says. Overall, students enjoyed prom last year and expect to have just as much fun this year.