“Say his name! No justice! No peace!”

The evening of Sunday, May 31, junior Amina King and fellow protesters gathered in Washington DC and marched to the White House chanting, “George Floyd! Say his name! No Justice! No Peace!” King recalls the protests as peaceful. But as the 11 pm curfew hit, billowing smoke and fire could be seen coming out of St. John’s, just footsteps from where King and her family stood a few hours prior. That night, rioters smashed glass and started fires as police targeted citizens with teargas. “Smoke enveloped the White House,” according to The Guardian.

This national outcry is drastically different from previous calls to action. With increasing threats of violence from the Secret Service, National Guard and military, senior Sky Bloomer states that protesters must be prepared for potential violence, teargas and rubber bullets. “At the White House the entire park was closed off with plenty of militarized police surveying the area. The crowd was restless and angry, and we knocked over the barrier and advanced into the park. The police moved forward to knock us back and used teargas. It was chaotic and none of the officers were wearing face masks,” Bloomer states. 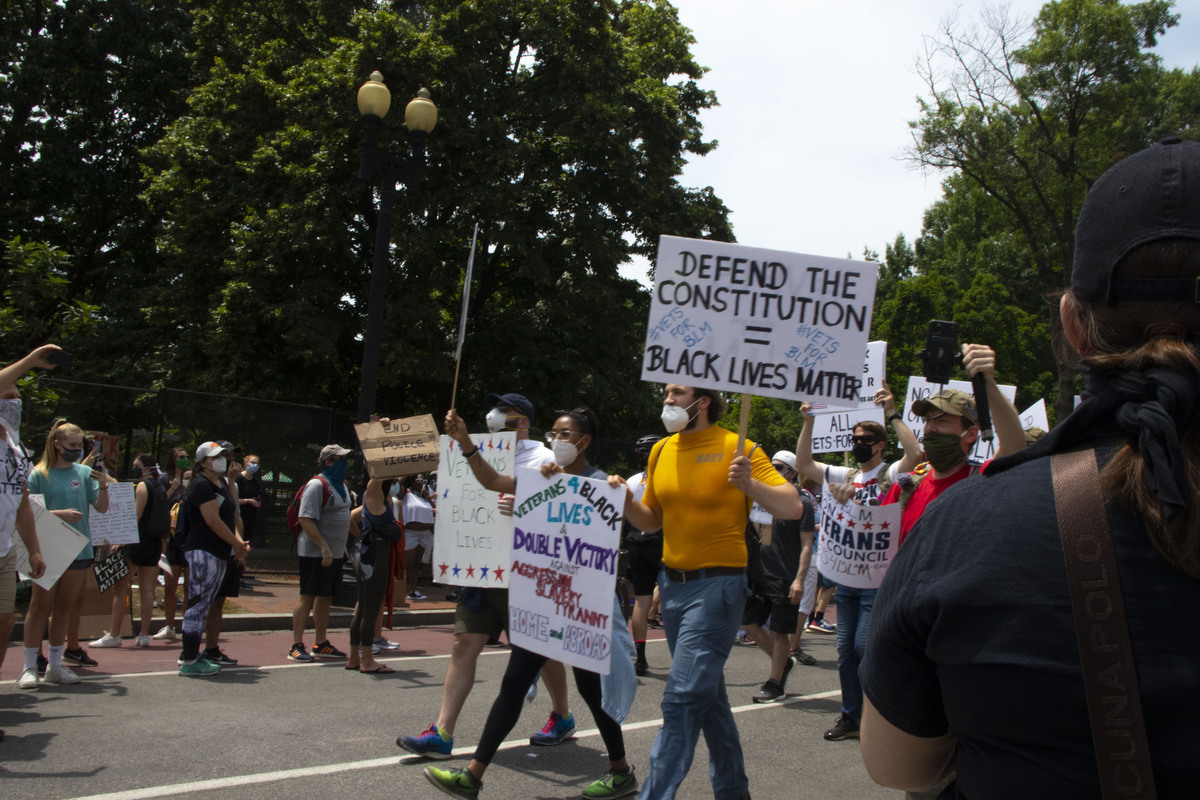 Tensions rose and some protests turned violent with fires and looting businesses. King says that she herself does not condone violence, but understands why it may happen. “Black people have fought for so long to be treated as human beings, and are so tired of fighting the same fights for decades, and are tired of being scared, of being beaten, and of being murdered. It gets hard to be peaceful after enduring so much,” King says.

Most protests are peaceful, communicating a message of power and solidarity through marching, kneeling, public speeches and singing.

On June 5, a birthday anthem echoed across the nation as thousands of protesters knelt in solidarity for Breonna Taylor’s 27th birthday. Senior Suveena Sreenilayam was among them, kneeling down on the street to sing ‘Happy Birthday’ in celebration and honor of Taylor’s life. “The protest was uplifting and beautiful; everyone was there for the same purpose of protesting the clear inequalities in our current society,” Sreenilayam says.

Amid the protesting outcries for change, individuals like junior Kiran Glass got to glimpse a scene of immense bravery and empowerment. “On Saturday when I was at the front of the crowd marching, we stopped and were told to turn around and look. The entire street was packed as far as we could see, and it was so energizing and powerful,” Glass recounts.

The demands of BLM protesters go beyond justice for victims of murder by police; they scream for tangible change and restructuring beyond a fading movement: changes on both micro and macro scales.

King highlights that she wants to incite a greater change than simply donating achieves. “As a person with Black heritage, I wanted to do something that felt like I was really taking action, like I was physically fighting and participating. The emotion that builds up for many people, especially Black people, needs an outlet, and protesting can help with that,” King says.

Protesters are calling to uproot the systemic and institutional racism that exists today. Senior Berekt Zewdie states that it is imperative for everyone to speak on this issue. “African Americans are way more likely to be imprisoned compared to whites who have done the same crimes. I think if more people speak and demand changes to our senators and representatives, it is an important step,” Zewdie comments.

The most pressing issue emerging from this movement is whether or not to defund, demilitarize or dismantle the police system, with Minneapolis taking the first step to transition from the current police system to a community-led model.

Glass criticizes that reforms have been tried and failed for too long because of the nature of the police system and its racist conception. “Specific policy measures I hope will be implemented include an end to qualified immunity, more funding for education, healthcare and employment, anti-racism school curriculum implemented, an end to cash bail and more restorative justice initiatives,” Glass says.

Bloomer, who is of Asian heritage, furthers that this is a time for allies to listen and elevate black voices while educating themselves on these pressing issues. “My voice is not supposed to be heard during this movement. I aim to hold conversations with people that do not understand the importance of this movement, as well as amplify the voices of Black people,” Bloomer reiterates.

The BLM movement strives to open up important conversations in order to end institutional and systemic racism. At the end of the day, King warns allies to be aware when speaking on this issue. “Don’t expect or force black people to speak. Because this is such an emotional and frustrating issue, it may be difficult for some people to speak on it, or they may need some time. Make sure to respect that,” King concludes.