This week Nate and Ryan are joined by Math teacher and avid football fan Mr. Sturm and senior Jacob Santangelo to help you set your fantasy football lineup for week three! 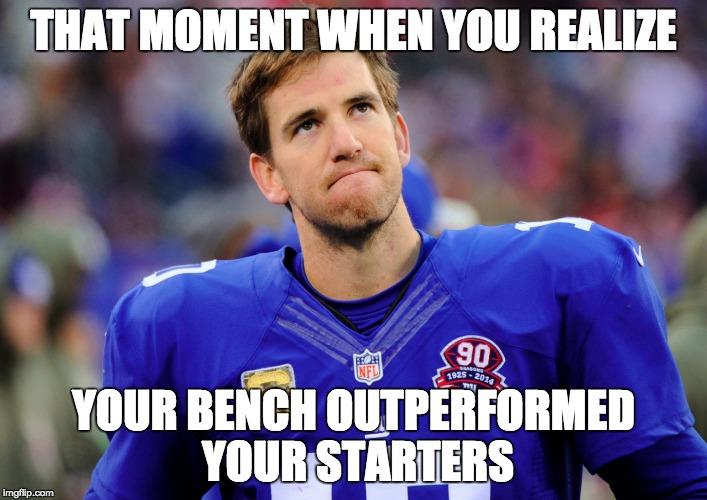 Photo: Having this problem? Come back every week to see what our editors have to say.

Photo: Having this problem? Come back every week to see what our editors have to say.

Start ‘em:
Players who are locks to play this week.
Nate: Travis Kelce, Kansas City Chiefs, TE
Kelce had a monster game last week, hauling in eight receptions for 103 yards and a TD. He's established himself as Alex Smith's number one target and one of the best tight ends in the game. If you have him, start him.
Ryan: Matthew Stafford, Detroit Lions, QB
Stafford had a game to forget last week, passing for just 122 yards against the Giants. However, Stafford is one of most underrated quarterbacks in the league, and he will prove it this week by topping the Falcons in a shootout, posting a massive stat line in the process.
Mr. Sturm: Christian McCaffrey, Carolina Panthers, RB
He's off to a slow start in his rookie season, only
averaging a mediocre 5.5 points a game. Saints have given up 13 fantasy points to Dalvin Cook in week 1 and allowed multiple Patriots running backs in week 2 to reach the end zone. He's in line for some serious production
Jacob: Kareem Hunt, Kansas City Chiefs, RB
Off to an incredible start to his rookie season, Hunt has 355 total scrimmage yards in his first two games. He should continue his great form against a mediocre Chargers defense.

Sit‘em:
Players who we think should not be in your starting lineup this week.
Nate: Russell Wilson, Seattle Seahawks, QB
With a struggling offensive line, Wilson has had a hard time getting space to throw or run, and isn't putting up the numbers we know he can. With a tough road matchup against the Titans this week, consider starting someone else.
Ryan: Jordan Howard, Chicago Bears, RB
Not only is Jordan Howard dealing with a shoulder injury, he is also clearly falling behind fellow Bears RB Tarik Cohen in touches. Throw in the fact that he is facing the tough Steelers defense and he is a easy choice to bench this week.
Mr. Sturm: Stefon Diggs, Minnesota Vikings, WR
Diggs is off to a hot start to the year with a multi-touchdown game against the Saints, but then a game with only 2 catches against the Steelers, I am concerned about the production without his starting QB Sam Bradford. Despite getting a similar number of targets (8 in week 1, 6 in week 2) there are clearly accuracy issues there and as long as Sam isn't playing, I am not starting Stefon Diggs.
Jacob: Eric Decker, Tennessee Titans, WR
With a poor start to the season, having only 3 receptions and 32 yards against the Jaguars last week, Decker looks set for another challenge against the Seahawks this week. Unlikely to get more than a few targets, Decker should certainly remain on the bench this week.

Trust
Players who performed well last week and are certain to have great performances again.
Nate: Todd Gurley, Los Angeles Rams, RB
Gurley showed flashes of his Rookie of the Year self last week, adding his highest yardage total since 2015. I expect he's going to have plenty of room to work some more magic against the listless 49ers Thursday night.
Ryan: Jason Witten, Dallas Cowboys, TE
Travis Kelce and Rob Gronkowski have been getting the most attention of the tight ends, and deservedly so. But Jason Witten has quietly gained over 50 yards and a touchdown in each of the past two weeks, and the consistent performer has a good chance to do it again against the Cardinals.
Mr. Sturm: Michael Crabtree, Oakland Raiders WR
With an outstanding week 2 that made him the highest scoring player for week 2 in standard scoring formats, it is safe to say Crabtree is a solid option for week 3. I also really like his match-up against the unimpressive Redskins secondary. The real bright spot on their secondary is Josh Norman, who presumably will be shadowing Amari Cooper for most of the game. Crabtree will most likely not score 3 TD's again this week but he is still a solid start.
Jacob: C.J. Anderson, Denver Broncos, RB
In great form last week, Anderson recorded 118 rushing yards and 2 touchdowns against Dallas. The Broncos will continue to rely on him next week on the road to Buffalo, so expect him to continue his form and possible grab a touchdown or two.

Bust:
Players who had one great performance, but we think won't do so well this week.
Nate: Alshon Jeffery, Philadelphia Eagles, WR
Jeffery did impress with a big day against a stellar Chiefs defense, but he'll be hard pressed to repeat that in a tough divisional match-up against Janoris Jenkins and a stingy Giants defense. If Jenkins is good to play, rethink putting Alshon in your lineup.
Ryan: Leonard Fournette, Jacksonville Jaguars, RB
Fournette has reached the end zone in two straight games for the Jaguars. The LSU product is certainly for real, but expect his scoring run to end against the Ravens, who have arguably the best defense in the NFL.
Mr. Sturm: Ty Montgomery, Green Bay Packers, RB
After having a stellar game against the Falcons with 10 rushes for 25 yards and 6 catches for 75 yards and a touchdown, Montgomery is due for a regression against the Bengals. Despite the Bengals playing so poorly offensively through the first 2 games, their defense has actually still been fairly solid. The Bengals have a strong defensive line with perennial pro bowler Geno Atkins stuffing the run, and even though Montgomery does most of his damage through the air, the Bengals should be able to contain Montgomery.
Jacob:Davante Adams, Green Bay Packers, WR
After injuries to Jordy Nelson and Randall Cobb, Adams was targeted 10 times and made 8 receptions last week against the Falcons. He should still have a decent week, but with Jordy Nelson looking like he is ready to play on Sunday against the Bengals, expect him to have fewer targets than last week.

Week 3 Off the waiver wire:
Players who are under the radar, and can be picked up in most fantasy leagues.
Nate: Pittsburgh Steelers Defense
If you need to stream a defense this week, or your normal defense has a tough match-up, consider the Steelers, since they have a great match-up this week against the Bears. Chicago's offense is averaging only 12 points per game and has turned the ball over three times in eight quarters. Expect them to dominate the line of scrimmage on Sunday.
Ryan: Chris Thompson, Washington Redskins, RB
Thompson appears to have taken the reins in the Redskins backfield from Rob Kelley. The former fifth-round pick's breakout game last week should be a preview of what is to come the rest of the season.
Mr. Sturm: Javorius "Buck" Allen, Baltimore Ravens, RB
One of the most telling stats for Buck is the number of offensive snaps he has played over his teammate, RB Terrance West. Last week Buck had 36 snaps to West's 17. Considering Allen is a 3 down back and the Ravens like to move the ball on the ground, not to mention his usage in the passing game while Danny Woodhead is recovering on IR, Buck Allen is primed to see the ball often.
Jacob: J.J Nelson, Arizona Cardinals, WR
In John Brown's absence, Nelson has managed a touchdown in each of the first two games of the season. With his speed and the fact that he is the Cardinals' main deep threat, he should continue this good form over the next few weeks.