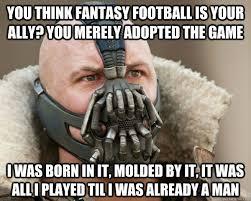 Photo: You can trust our picks, we know what we're doing ;)

Photo: You can trust our picks, we know what we're doing ;)

Start ‘em:
Players who are locks to play this week.
Nate: Todd Gurley, Los Angeles Rams, RB
Gurley has been rolling right now for the Rams, earning himself offensive player of the month honors. I expect him to keep playing great against a subpar Dallas defense
Ryan: Christian McCaffrey, Carolina Panthers, RB
With Cam Newton, Kelvin Benjamin, and Greg Olsen all dealing with various forms of injuries, McCaffrey is the top healthy offensive player left on the Panthers. Throw in the fact that he faces an overrated Patriots defense and he should be in for a big game.
Elbi: DeAndre Hopkins, Houston Texans, WR
Hopkins is the entire Texans' receiving core and should be able to exploit the 28th ranked pass defense of the Tennessee Titans.

Sit‘em:
Players who we think should not be in your starting lineup this week.
Nate: Kelvin Benjamin, Carolina Panthers, WR
The Patriots defense always excels at taking away their opponents number one target, so I wouldn't expect too much out of Benjamin in what could be a rough afternoon for the Panthers offense.
Ryan: Ben Roethlisberger, Pittsburgh Steelers, QB
While many NFL QBs are excelling in their older years, Big Ben seems to be on the decline. Going up against a Ravens defense that should be angry after last week's blowout loss, he will have a rough day.
Elbi: T.Y Hilton, Indianapolis Colts, WR
The Seahawks have the 9th ranked pass defense and expect them to get to the Colt's young QB. The Colts will struggle on offense so keep Hilton on the bench.

Trust
Players who performed well last week and are certain to have great performances again.
Nate: Desean Jackson, Tampa Bay Buccaneers, WR
Jackson racked up 84 yards and a receiving TD last week, and has drawn seven targets in each of his first two games with the Bucs. With that workload, you can bank on him hitting paydirt again.
Ryan: Stefon Diggs, Minnesota Vikings, WR
Case Keenum may not be Sam Bradford, but he is good enough to get the ball in Diggs' hands and let the talented playmaker wreak havoc for a second straight week.
Elbi: Todd Gurley, Los Angeles Rams, RB
Todd Gurley put up 32 fantasy points last week against the lowly 49ers. Trust he'll do the same against a questionable Cowboys defense.

Bust:
Players who had one great performance, but we think won't do so well this week.
Nate: Tyreek Hill, Kansas City Chiefs, WR
Hill, and the Chiefs offense, has exploded out of the gate and been dynamic thus far, but this Monday night game brings them an interesting matchup against a Redskins defense that has looked great. Hill might have a hard time finding room to run this week.
Ryan: Devonta Freeman, Atlanta Falcons, RB
Freeman had a big game against the Lions last week, but he is going to run into a brick wall in the form of the Bills' defensive line.
Elbi: Marshawn Lynch, Oakland Raiders, RB
The hype surrounding "Beast Mode” after week 2's 10 point performance against the Jets was all for not considering last week he only gained 18 rush yards on 6 carries. He'll have the same or even a worse performance against one of, if not the best, defense of the Denver Broncos

Week 4 Off the waiver wire:
Players who are under the radar, and can be picked up in most fantasy leagues.
Nate: Paul Richardson, Seattle Seahawks, WR
Richardson has TDs in back to back games, and if Doug Baldwin is forced to miss any time, Richardson could explode again. If he's still available in your league for some reason, you should snag him.
Ryan: Chris Johnson, Arizona Cardinals, RB
The aging Chris Johnson may be in his last NFL season, but with the injury to David Johnson, CJ2K seems to have assumed the role of No. 1 running back in the Arizona offense.
Elbi: Wendell Smallwood, Philadelphia Eagles, RB
With Darren Sproles injury, Smallwood steps into be the Eagles' passing down back and should get tons of carries. He's available in about 85% of leagues.