This week we welcome Mr. Currence, assistant principal, and Allison Mackenzie, a junior basketball and softball player here at Blair.

Start ‘em:
Players who are locks to play this week.
Ben: Andy Dalton, Cincinnati Bengals, QB
Dalton is the number two scoring QB this year, and his running game is very balanced. He can find any receiver willing to get open to rack up the points, even against the strong Bills defense.
Charlie: Chris Ivory, New York Jets, RB
Chris Ivory has been averaging over 20 points in games where he is uninjured, and Devonta Freeman just proved that the Redskins defense can be dominated on the ground.
Allison: Tom Brady, New England Patriots, QB
… Unfortunately. I would choose anyone else if I could, but he's a huge offensive threat. I mean, he's Tom Brady.
Mr. Currence: Aaron Rodgers, Green Bay Packers, QB
He is hands down the top QB in the league right now. He consistently puts up big numbers, and this week will be no different. San Diego is coming off a blown game with a 2-3 record, their defense is shaky at best, AND the game is at Lambeau Field. Look for Rodgers to throw at least 250 yards and 3 TDs. 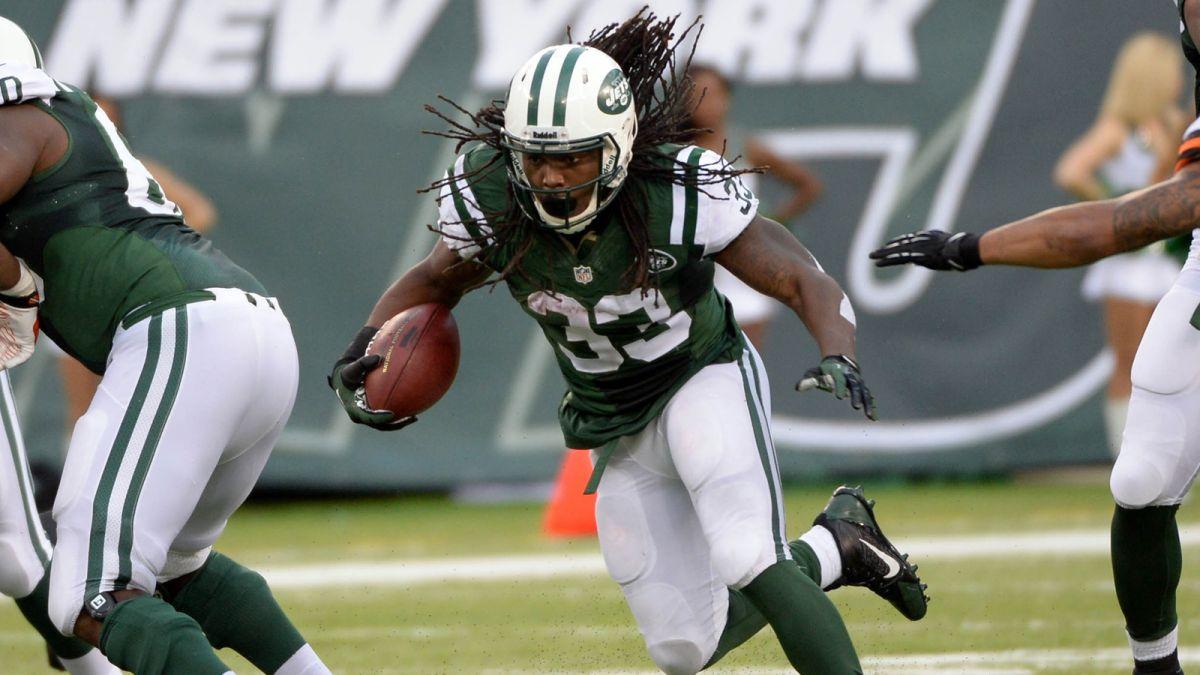 Photo: Chris Ivory is a must-start this week.

Photo: Chris Ivory is a must-start this week.  Photo courtesy of Fox Sports.

Bench ‘em:
Players who we think should not be in your starting lineup this week.
Ben: Lamar Miller, Miami Dolphins, RB
The Dolphins just are not very good and Miller's contributions have been so limited this year. The Titans have had a tougher defense this year than expected.
Charlie: James Jones, Green Bay Packers, WR
James Jones's targets have been steadily decreasing as the weeks go on, and although he ripped off a 65-yard touchdown catch and run last week, he can't keep up this production.
Allison: Marshawn Lynch, Seattle Seahawks, RB
Unsure of whether or not he'll play against a big Panthers defense with Luke Kuechly back in the middle, bench Beast Mode this week.
Mr. Currence: Pierre Garcon, Washington Redskins, WR
Cousins had a poor showing last week, and his lack of accuracy resulted in low number for Garcon, despite DeSean Jackson being inactive. The Jets are coming off a bye week and Pierre Garcon is going to find himself on Revis Island.

Trust
Players who performed well last week and are certain to have great performances again.
Ben: Matt Forte, Chicago Bears, RB
The Detroit Lions are awful, and Forte has running over defenses in the running and passing game.
Charlie: Willie Snead, New Orleans Saints, WR
Snead was targeted more than Brandin Cooks last week and went for 140 yards. He was also targeted twice in the redzone, and is shaping up to be Brees's favorite target.
Allison: Chris Johnson, Arizona Cardinals, RB
The Cardinals are scoring 40+ in every game it seems, and their running game has been so good no matter who has the ball.
Mr. Currence: Brian Hoyer, Houston Texans, QB
He's the go to now in Houston. He's got a solid receiving core and will be facing off against a 1-4 Jaguars team who are struggling to find their identity.

Bust:
Players who had one great performance, but we think won't do so well this week.
Ben: Frank Gore, Indianapolis Colts, RB
He went against a good Texans line, but the old veteran got by easily. He will be stopped by the strong linebackers in New England.
Charlie: Jaelen Strong, Houston Texans, WR
Jaelen Strong's 17 point game last week was a fluke, given that it came from two touchdown passes. As soon as Houston's receiver core heals up, Strong will return to his zero points a game average for the first four weeks.
Allison: Denver Broncos, D/ST
They played the Raiders… Come on. Josh McCown may not have the game he had last week, but he's still a legit threat in the pocket even against the great Broncos defense.
Mr. Currence: Josh McCown, Cleveland Browns, QB
He put up monster numbers against a Ravens defense with a dysfunctional defensive secondary. Next week he is facing the very tough Denver defense, the Broncos will hold him to 200 yards and I wouldn't be surprised if he did not get a TD pass.

Week 2 Off the waiver wire:
Players who are under the radar, and can be picked up in most fantasy leagues.
Ben: Blake Bortles, Jacksonville Jaguars, QB
The second year QB has found two favorite targets in Allen Hurns and Allen Robinson, and they've developed a rushing game to go along with it, only making his life easier.
Charlie: Christine Michael, Dallas Cowboys, RB
I know it's the Cowboys bye week, but now is the time to stash Michael. The Cowboys are making big changes in their offense, and he will take on a much larger role.
Allison: Julian Edelman, New England Patriots, WR
He's not all that under the radar in fantasy, but Gronk and Brady steal the spotlight away from Edelman.
Mr. Currence: Charcandrick West, Kansas City Chiefs, RB
Jamaal Charles is out for the rest of the season, and the Chiefs have said West is their starter. This week facing off against a porous Vikings defense, he's a great waiver wire pick.