Start ‘em:
Players who are locks to play this week.
Ben: Todd Gurley, St. Louis Rams, RB
He's really good, and the Cleveland defense is pretty bad. Gurley didn't score in weeks 3 or 4 and still scored 15 points. He'll get into the end zone and will put up big numbers.
Charlie: Eli Manning, New York Giants, QB
Manning did poorly against the Eagles last week, but he has a bad history in Philly. He should go off again for 20+ points against the Cowboys.
Jackson: Devonta Freeman, Atlanta Falcons, RB
He's going against the terrible Titans defense, and has had a monster season up to this point.
Ms. Godwin: Doug Martin, Tampa Bay Buccaneers, RB
The Redskins' defense has given up almost 500 rushing yards in two weeks. 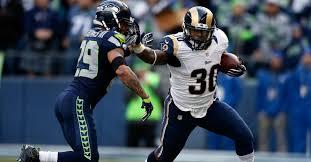 Photo: Make sure to start Rams running back Todd Gurley this week.

Photo: Make sure to start Rams running back Todd Gurley this week.  Photo courtesy of FanBuzz.

Bench ‘em:
Players who we think should not be in your starting lineup this week.
Ben: Justin Forsett, Baltimore Ravens, RB
Forsett started off very slowly in the first three weeks, but next week against Arizona's strong front seven he'll have a tough time picking up yards.
Charlie: Carlos Hyde, San Francisco 49ers, RB
Carlos Hyde has been the picture of inconsistency, and I don't trust him at all going against a strong Seahawks defense.
Jackson: Antonio Brown, Pittsburgh Steelers, WR
He hasn't been the same without Big Ben, and now he has the third string QB Jarvis Landry throwing the ball his way.
Ms. Godwin: Blake Bortles, Jacksonville Jaguars, QB
He's playing against a decent defense this week (Buffalo) and Jacksonville is awful anyway. 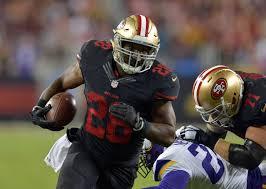 Photo: Don't start 49ers running back Carlos Hyde this Thursday against the Seahawks.

Trust
Players who performed well last week and are certain to have great performances again.
Ben: Martavis Bryant, Pittsburgh Steelers, WR
In his first game back after a suspension and an injury, Bryant had a breakout game, aided by a long touchdown. He was targeted in the end zone by third-string Landry Jones, and with Jones likely to start next week, he'll go back to Bryant again.
Charlie: Lamar Miller, Miami Dolphins, RB
Lamar Miller has a new head coach who's looking to run the ball more than ever, so he'll continue getting somewhere around 20 carries a game.
Jackson: Tom Brady, New England Patriots, QB
Tom Brady is the most consistent quarterback in the league and on a high scoring power offense.
Ms. Godwin: Devonta Freeman, Atlanta Falcons, RB
He's a good player, the number one running back and playing against Tennessee's subpar defense.

Bust:
Players who had one great performance, but we think won't do so well this week.
Ben: John Brown, Arizona Cardinals, WR
QB Carson Palmer has so many receiving threats, as well as three running backs, so you never know who's going to score the big fantasy points for them other than the quarterback.
Charlie: Ronnie Hillman, Denver Broncos, RB
The last few seasons, Ronnie Hillman has similarly had one or two games but then returned to mediocrity soon thereafter. This team could be taken back by CJ Anderson or even Juwan Thompson at any moment, so I don't trust Hillman at all.
Jackson: DeMarco Murray, Philadelphia Eagles, RB
DeMarco Murray has been good of late, but soon he'll be back to his low scoring ways.
Ms. Godwin: Chris Ivory, New York Jets, RB
Last week he had 143 rushing yards against the Redskins but will not do as well against the much better Patriots.

Week 2 Off the waiver wire:
Players who are under the radar, and can be picked up in most fantasy leagues.
Ben: Tim Wright, Detroit Lions, TE
Wright scores touchdowns. He's big, strong, and goes in for touchdowns. He was on the Patriots and even took some fantasy points away from Gronk, but now with the Lions' Eric Ebron out, look for Wright to be a good receiving TE.
Charlie: David Cobb, Tennessee Titans, RB
Cobb has been on the Injured Reserve the whole season, but looked like the de facto RB1 for the Titans. He returns in week 9 to a sorely lacking Tennessee backfield, and if he's on your waiver wire now is the time to stash him.
Jackson: Stefon Diggs, Minnesota Vikings, WR
He got 12 fantasy point last week and looks like the best option among the Vikings wide receivers.
Ms. Godwin: Joe Flacco, Baltimore Ravens, QB
He needs a bounce back game coming off a loss against the 49ers, even though the Cardinals defense can be pretty tough.