Amid the thundering applause after Oscar winner Patricia Arquette's rousing speech advocating "wage equality once and for all and equal rights for women in the United States of America,” a question emerged:
Why, after all these years, is equality so elusive?

Why does it seem that gender equality, like a frightened dove, flutters out of reach every time we approach it? Are our hands too sordid with prejudice to be worthy of touching its pristine feathers?

Perhaps it is because we have been contemplating the debate from the wrong angle all along.
The feminist writer Simone de Beauvoir famously asserted that "woman cannot be transformed unless society has first made her really the equal of man.” But the word "equal” implies a certain similitude, a certain homogeneity between the sexes that extends beyond the abstract concepts of character and content of mind — a homogeneity that does not exist. Women are not simply men repackaged into a different shape; instead, women bring a different skill set of equal value to the table. What we should be seeking is equivalence, not equality — parity, and not ponderous uniformity.

The latest studies appear to support this approach. Take, for instance, the recent study conducted by the Massachusetts Institute of Technology that was recapitulated as a New York Times opinion piece in January. The authors concluded that "simply having more women” was the key to successful groups. Similarly, Stanford researcher Jo Boaler argued in a series of articles on women in mathematics that the two sexes strive for different goals in math learning, with women embracing a desire for deeper understanding.
John Dugan and Susan Komives of the University of Maryland also weighed in on the matter in 2007. They noted that the results of their study indicated "women's leadership competence was higher than men's”, a conclusion supported by their 2009 collaboration with Shepherd University's Thomas Segar, in which they found female college students "scored significantly higher than men on seven out of eight leadership measures.”

Despite the multitude of studies such as these, the pay gap between men and women — a quantitative measure of gender parity if there ever was one — still exists.

The problem, it seems, is that we are seeking equality and not equivalence. Society, in its quest to equalize, is trying to remediate the effects of conscious misogyny and artificially raise the number of women in certain fields via special programs such as Girls Who Code.
While this quest may be noble, it also has deleterious effects: Kim Gordon and Shambhavi Kadam note in Fortune that the idea that "middle-class, educated women … [need] specialized programmes to ‘help them' compete on the same level as men” makes them appear inferior to their male counterparts. 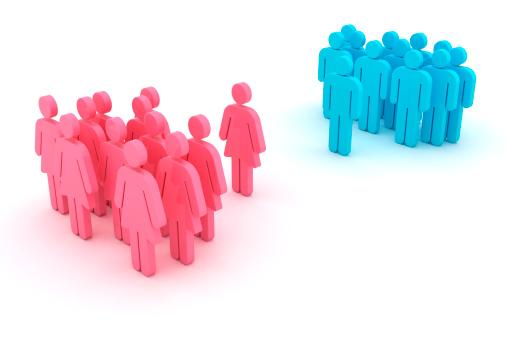 Photo: The gender debate poses dynamic and complex questions that are often difficult to address.

Photo: The gender debate poses dynamic and complex questions that are often difficult to address.

Rather than being empowered, women are further marginalized by the cloak of victimhood that the gender equality movement has bequeathed them. Their inextricable association with gender discrimination is what allows people to characterize a woman being "sensitive to her ‘status'” in a company as a "personality flaw”, as a managing partner at Kleiner Perkins Caufield & Byers did in Ellen Pao's lawsuit. Striving for equality is preventing us from achieving equivalence.

Much of the problem stems not from misogyny, as one might believe, but from unconscious, unacknowledged biases, the seemingly innocuous kind that lead college students to describe female professors as "bossy” rather than "brilliant.” It is that same bias, however, that leads employers to choose men over women despite identical test scores.

Just because this bias is unconscious, however, does not mean that it cannot be changed.

Colleges in particular have been found to be particularly influential on the beliefs, both conscious and unconscious, that students develop. By encouraging gender equivalence rather than equality and judging individuals by the quality of their minds and characters rather than their genders, colleges can help the next generation of employers and employees turn gender parity from an impossibility to a reality.

Together, we can set that dove free at last.