Which college prospects will be drafted when

This is the slow time in the NFL calendar, but as the 2017 draft approaches, it's always fun to project which college prospect will go to which NFL team. Here's SCO's NFL mock draft for the upcoming season. 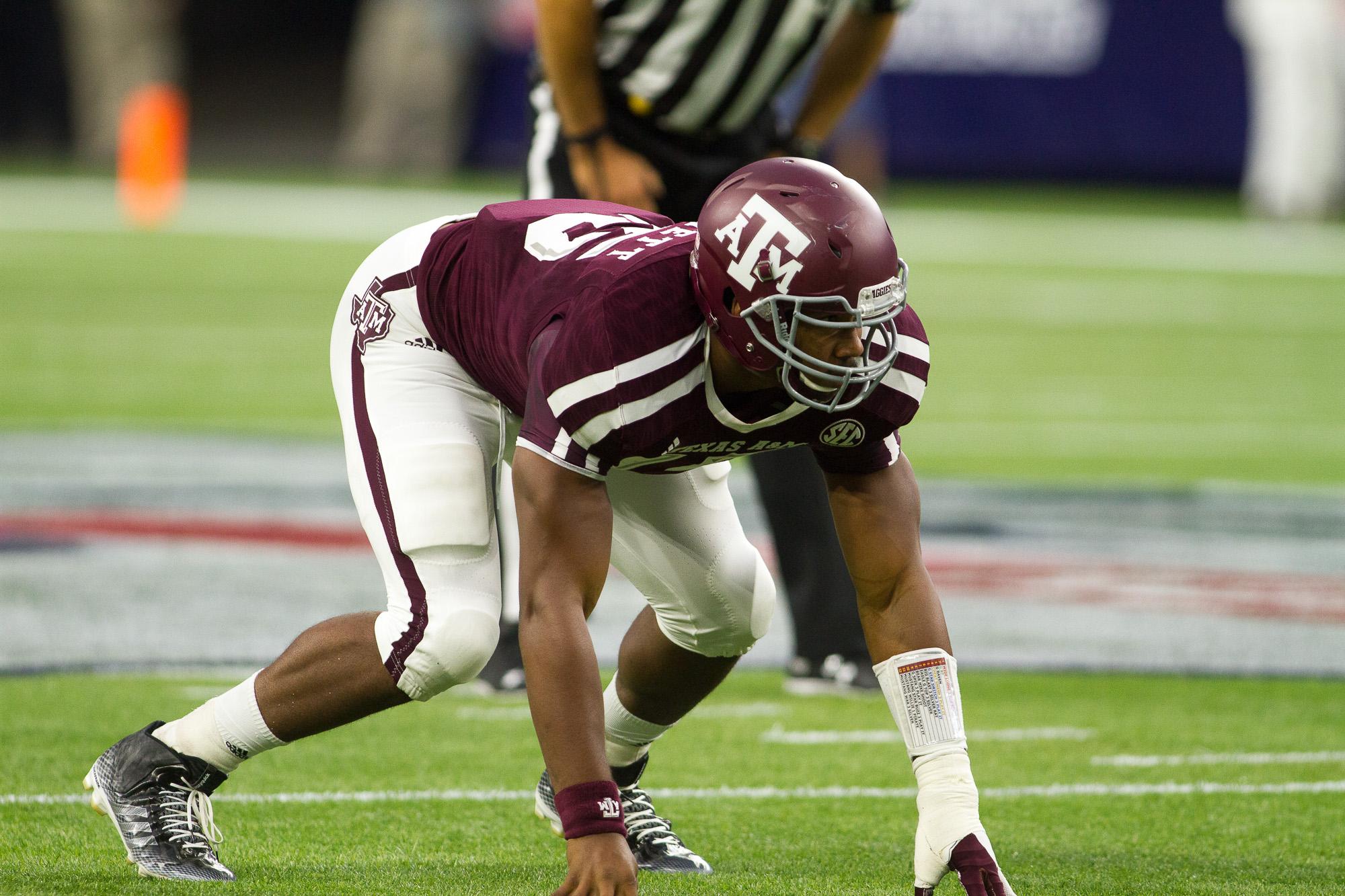 Photo: Myles Garrett is the consensus top pick in this year's draft.

Pick 3: Chicago Bears
Ryan: Jamal Adams, S, LSU
The Bears have found their running back of the future in Jordan Howard, so they'll upgrade on the defensive end early in the draft this year with shutdown safety Jamal Adams.
Charlie: Solomon Thomas, DE, Stanford
Pairing young defensive tackle Eddie Goldman with pass rusher Solomon Thomas will finally give the Bears a way to chase down opposition quarterbacks.

Pick 4: Jacksonville Jaguars
Ryan: Leonard Fournette, RB, LSU
Fournette is the clear cut top offensive player in this draft class. Jacksonville would be glad to steal him with the fourth overall pick, as he would provide much needed help to Blake Bortles.
Charlie: Jamal Adams, S, LSU
The Jaguars offense is one quarterback away, so they'll continue to draft defense. The pairing of Jalen Ramsey and Jamal Adams will wear down opposition passing attacks.

Pick 6: New York Jets
Ryan: Marlon Humphrey, CB, Alabama
With Darrelle Revis gone, the Jets desperately need a new star cornerback. Plugging Humphrey into the lineup would be the best possible solution to their secondary woes.
Charlie: DeShone Kizer, QB, Notre Dame
The Jets love taking quarterbacks higher than they should. Unless they make a move on Colin Kaepernick, it looks like another first round passer will come to New York.

Pick 9: Cincinnati Bengals
Ryan: Solomon Thomas, DE, Stanford
The Bengals defensive line will be one to fear if they can pair Solomon Thomas with Geno Atkins.
Charlie: Jabrill Peppers, S, Michigan
The Bengals roster has been heavily depleted during free agency, and a playmaker the caliber of Peppers should ignite things on the back end. 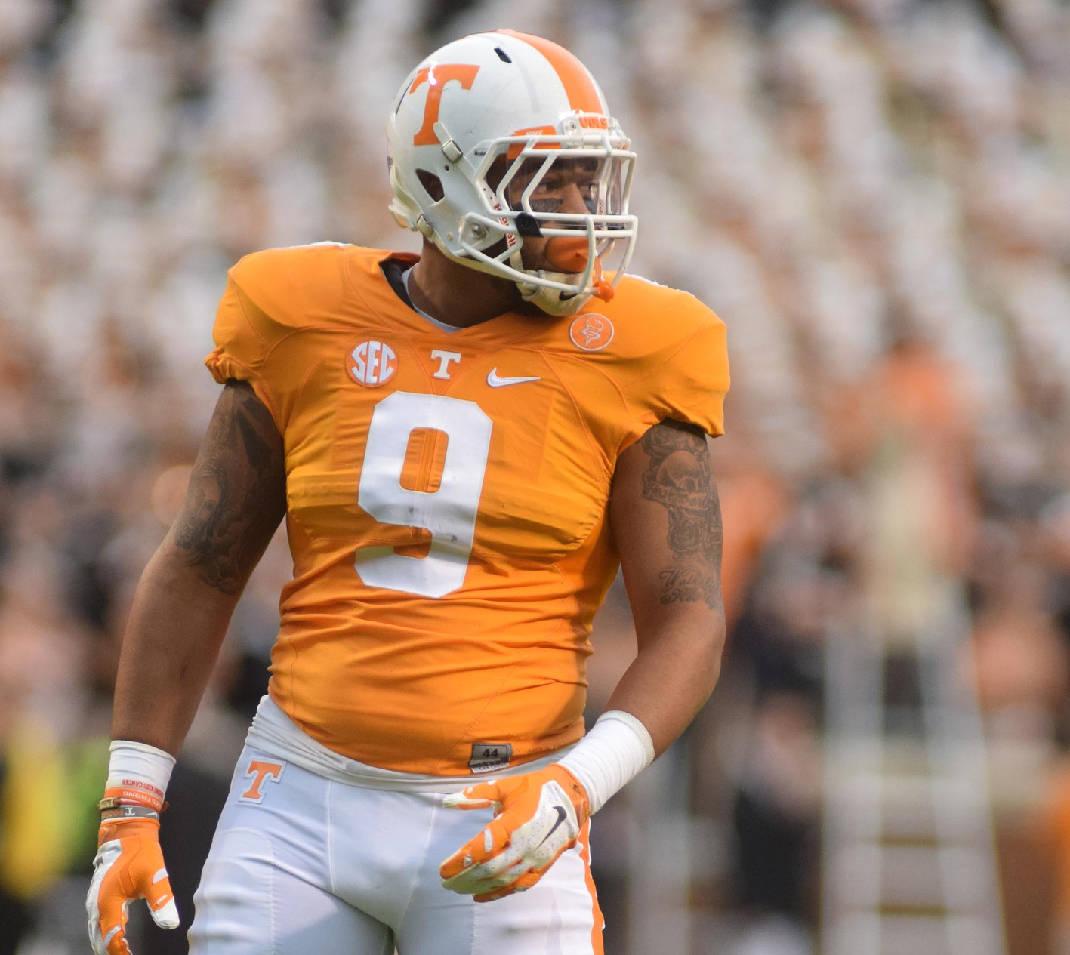 Pick 12: Cleveland Browns (from Philadelphia Eagles)
Ryan: Mitchell Trubisky, QB, North Carolina
This might be a reach, and a risky pick, but the Browns cannot after another year with a dud at the quarterback position.
Charlie: Marlon Humphrey, CB, Alabama
Cleveland's first pick bolstered the pass rush, and the second will focus on the aging secondary. Humphrey would likely push Joe Haden onto the trade block.

Pick 15: Indianapolis Colts
Ryan: Cam Robinson, OT, Alabama
Andrew Luck can't carry the Colts himself. He still might have to, but at least Cam Robinson might help keep him healthy.
Charlie: Forrest Lamp, OG, Western Kentucky
The Indianapolis Colts have spent several picks on o-line help, but Andrew Luck is still getting hurt. Lamp will be a welcome addition to the offensive trench.

Pick 17: Washington Redskins
Ryan: Reuben Foster, LB, Alabama
Adding Foster will improve the Redskins' poor run defense. Despite questions surrounding Foster's character, he is the right choice here.
Charlie: Takkarist McKinley, OLB, UCLA
Tak McKinley not only has an awesome name, but will also be a nice pair with outside linebacker Ryan Kerrigan. If Junior Gallette finally gets healthy, the ‘Skins defense will be looking nice.

Pick 18: Tennessee Titans
Ryan: John Ross, WR, Washington
The Titans have lacked an explosive offense for years, but the combination of Mariota and Ross will create one of the speediest offensive attacks in the league.
Charlie: Corey Davis, WR, Western Michigan
Corey Davis will move to number one on the wide receiver depth chart, ahead of Rishard Matthews, Tajae Sharpe and the perennially underutilized Kendall Wright.

Pick 19: Tampa Bay Buccaneers
Ryan: Jabrill Peppers, S, Michigan
The Buccaneers will roll the dice on the ultra-athletic Peppers, who can bolster both their special teams and secondary.
Charlie: Christian McCaffrey, RB/WR, Stanford
McCaffrey can be a jack-of-all-trades for quarterback Cam Newton, helping out in the passing, rushing, and return game.

Pick 20: Denver Broncos
Ryan: Zach Cunningham, LB, Vanderbilt
Coming from a smaller SEC school like Vanderbilt, Cunningham is one of the most underrated players in this draft class. The Broncos will steal this dynamic player with the twentieth pick.
Charlie: Reuben Foster, LB, Alabama
With the retirement of DeMarcus Ware and the loss of Danny Trevathan last year, the Broncos' linebacker corps is looking a little sparse. 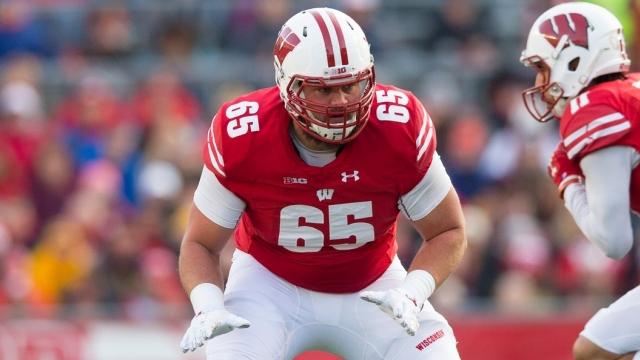 Pick 25: Houston Texans
Ryan: O.J. Howard, TE, Alabama
Whoever the Texans start at quarterback next year, he'll need some weapons other than DeAndre Hopkins.
Charlie: Deshaun Watson, QB, Clemson
If the Texans don't pick up Tony Romo, they'll go after the most pro-ready quarterback in the draft: Deshaun Watson. This guy just finds ways to win.

Pick 26: Seattle Seahawks
Ryan: Malik McDowell, DT, Michigan State
The Seahawks can add to their solid pass rush with the 285 pound beast McDowell.
Charlie: Gareon Conley, CB, Ohio State
Richard Sherman might be on his way out, but even if he stays, the Legion of Boom needs another defender on the island.

Pick 27: Kansas City Chiefs
Ryan: Adoree' Jackson, CB, USC
With Jackson and Tyreek Hill as return threats, opposing special teams will be scrambling to defend the Chiefs during kickoffs.
Charlie: Alvin Kamara, RB, Tennessee
The Chiefs got rid of franchise rushing leader Jamaal Charles, and while the Spencer Ware/Charcandrick West combo is enticing, an athletic freak like Kamara could always find a place.

Pick 28: Dallas Cowboys
Ryan: David Njoku, TE, Miami
Unfortunately for Cowboys fans, Jason Witten is on his way out, but luckily David Njoku is a capable replacement.
Charlie: Tim Williams, OLB, Alabama
The Cowboys will take the best defensive player left on the board at pick number 28. Tim Williams would be a day one starter alongside Sean Lee and maybe Jaylon Smith.

Pick 29: Green Bay Packers
Ryan: Charles Harris, DE, Missouri
Harris is an explosive, versatile defender that can help the Packers not always rely on their powerful offensive attack.
Charlie: Garrett Bolles, OT, Utah
The Packers have been hemorrhaging offensive linemen, and are far more likely to go after replacements in the draft than in free agency.

Pick 31: Atlanta Falcons
Ryan: Forrest Lamp, OG, Western Kentucky
Lamp is this year's underrated small school lineman that will break out on the national stage.
Charlie: Fabian Moreau, CB, UCLA
Fabian Moreau would be a high first round pick in most drafts, but in this year's loaded college secondary, he's a great value pick for the Falcons across from Desmond Trufant. 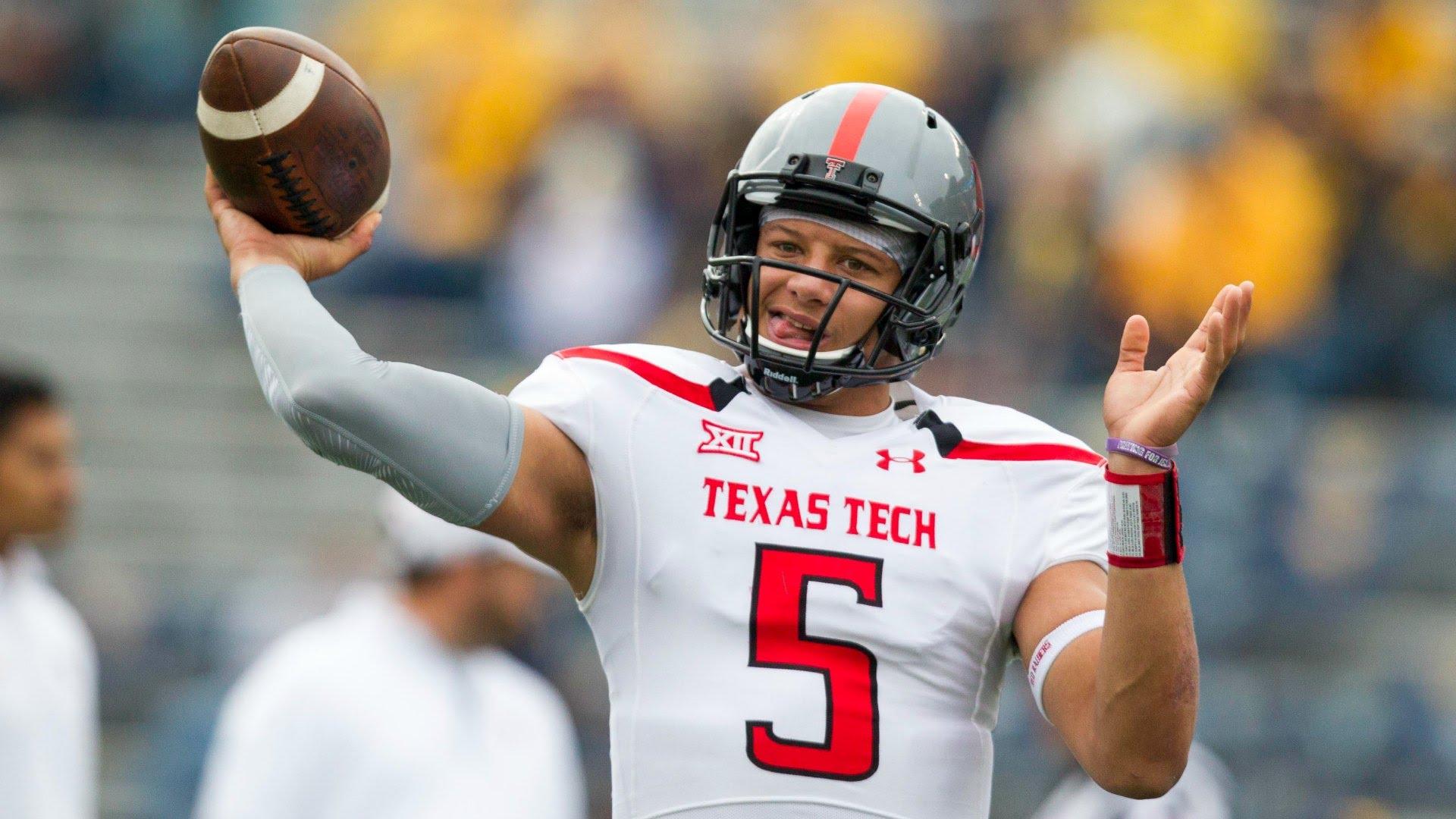 Photo: The Saints could look to Patrick Mahomes II to be the quarterback of the future.

Photo: The Saints could look to Patrick Mahomes II to be the quarterback of the future. Photo courtesy of YouTube.

Pick 32: New Orleans Saints (from New England Patriots)
Ryan: Patrick Mahomes II, QB, Texas Tech
Mahomes can develop behind Drew Brees as he learns a more traditional NFL offense.
Charlie: Mitchell Trubisky, QB, North Carolina
The New Orleans Saints have two first round picks after trading with the Patriots, and one will definitely go towards defense. The other could be used on a high-upside successor to the aging Drew Brees.