The NFL season is well and truly over, putting the SCO fantasy football articles on hold until next year. But it's never too early to prepare for the future, so without further ado, here is the Silver Chips Online 2016 NFL Mock Draft.

The Rams traded up for this pick in order to take a quarterback to replace Blaine Gabbert and Colin Kaepernick, and they prefer Goff to Wentz.

The Eagles followed the Rams in trading up to look for a franchise quarterback. They'd be happy with Wentz or Goff at number two.

The Chargers desperately need an offensive line to defend Philip Rivers, and Tunsil is the best tackle out there.

If Ramsey falls this far in the draft, the Cowboys will jump on him to replace aging cornerback Brandon Carr, who may yet be released by the team.

Jack could be the most versatile defender in this year's draft, and adding him to a linebacking core of Paul Posluszny and Telvin Smith would be impressive.

The Ravens need to rejuvenate their pass rush, and Bosa would slot right into the spot recently vacated by veteran Chris Canty.

The 49ers would've loved a new quarterback with this pick, but will settle for a defensive end with an incredibly high ceiling and great size and physicality.

The Browns have a lot of holes to fill, and Lee could replace at least some of the tackling numbers that left with Karlos Dansby and Donte Whitner.

Alterraun Verner wasn't as good last year as he usually is, and the Bucs need a true cornerback one to pair him with. 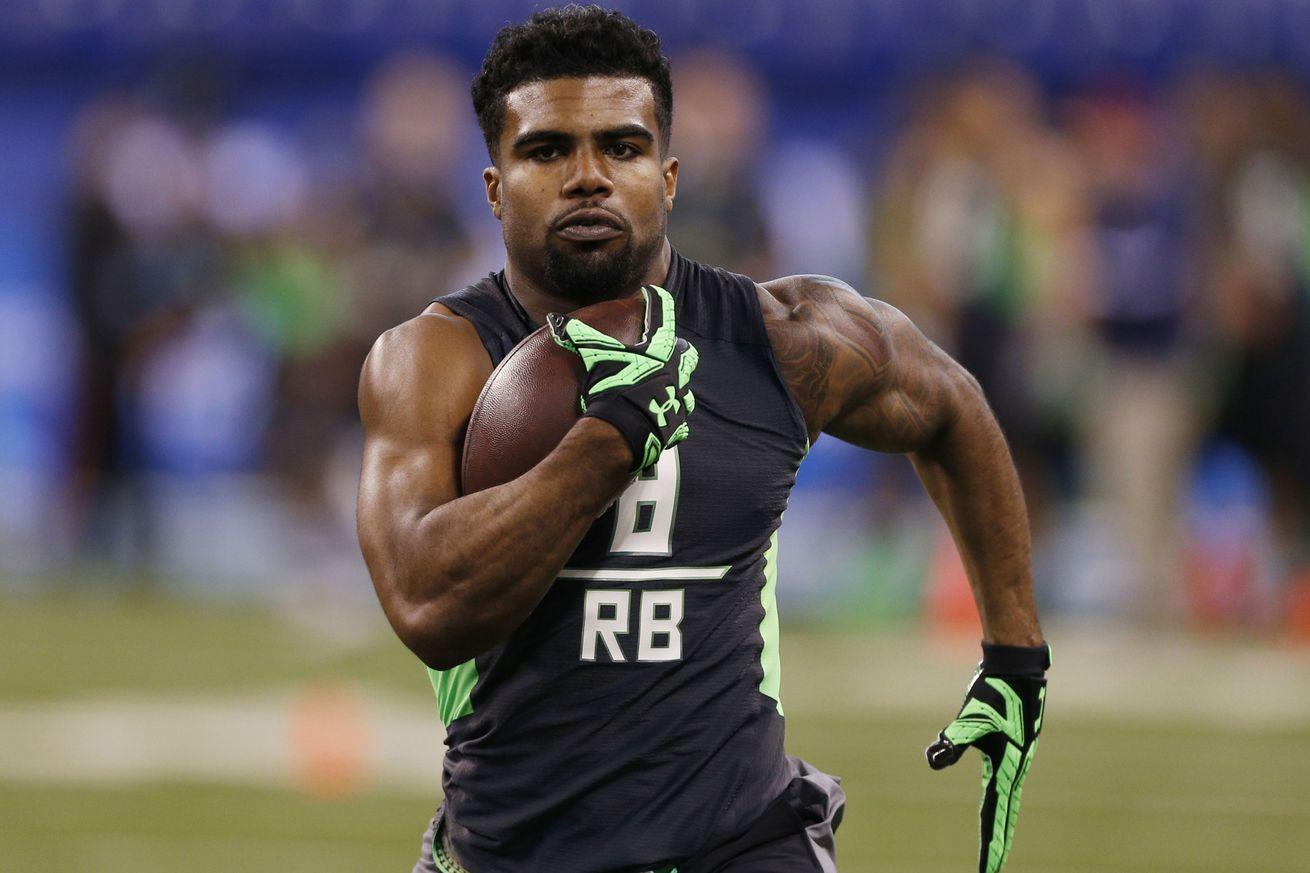 Photo: The Eagles could target running back Ezekiel Elliott out of Ohio St.

Photo: The Eagles could target running back Ezekiel Elliott out of Ohio St. Photo courtesy of NFL.com.

Rashad Jennings and Shane Vereen are quite possibly the worst running back duo in the NFL. If Ezekiel Elliott falls to the Giants, they'd be loathe not to grab him.

Good offensive tackles are hard to come by, and the Bears don't have one at the moment. Stanley can immediately help at right tackle and move to left with coaching.

The Saints were gashed on the ground by their opposition this year, and Jarran Reed fits the bill at defensive tackle.

Floyd would be among the best defensive players left on the board, and with second year prospects Jay Ajayi and Devante Parker solidifying the offense, defense is the way to go for the Dolphins in the first round.

The Raiders have done a good job of building their secondary and linebacking core through free agency, but could use a boost on the defensive line.

The Titans nab a great inside linebacker to play alongside breakout candidate Wesley Woodyard and solidify their front seven.

Megatron left Detroit's offense in shambles when he announced his retirement, and Marvin Jones is not the solution, but Treadwell could be.

The Falcons need a speedy receiver to run across from Julio Jones, and Corey Coleman logged one of the best 40 yard dash times at this year's combine.

The injuries to Andrew Luck, Matt Hasselbeck, and Charlie Whitehurst show that the Colts need help on the o-line.

The Bills have finally found a quarterback, and have some solid offensive weapons, allowing them to pick the best remaining defender on the board, and a replacement for Jerry Hughes.

The New York Jets lost Damon "Snacks" Harrison to the Giants in free agency, and could opt to replace him in the first round this year. 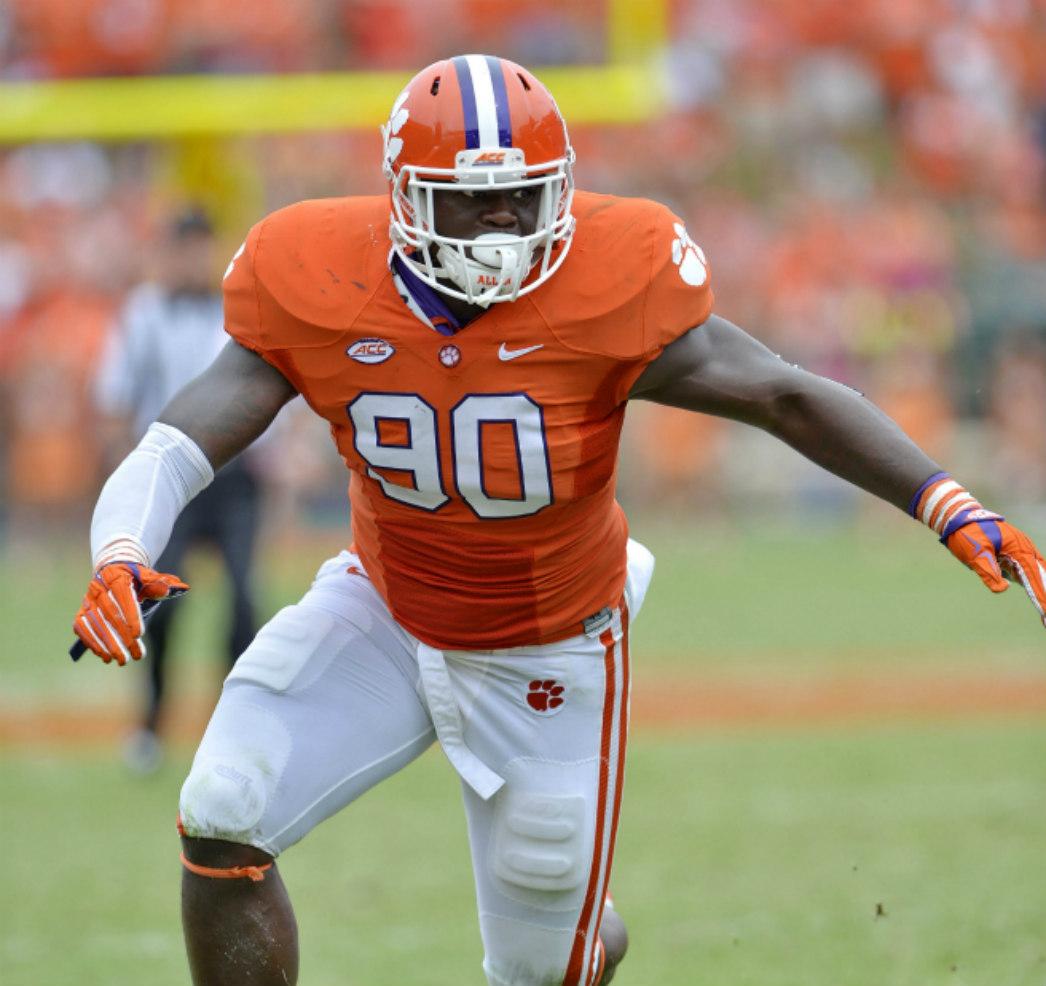 The Redskins defense outside of Ryan Kerrigan didn't put nearly enough pressure on the quarterback, and a strong defensive end like Lawson can help step it up.

Brock Osweiler is being paid the big bucks to jumpstart the Texans offense, but he'll need another offensive weapon to get the job done.

The Vikings have the makings of a top defense, and a strong edge rusher could be what they need to get to the next level.

Mohamed Sanu and Marvin Jones left in free agency, and the Bengals get Doctson to make up for it.

The Steelers defensive group stood strong for most of last year, but William Gay won't live forever, and the secondary is definitely the weak point.

The Seahawks defense is in its prime right now, but one of its oldest members is defensive tackle Brandon Mebane, who will soon need to be replaced.

B.J. Raji is taking a hiatus from football, sending the Packers into a scramble to find his replacement. Rankins is that guy.

The Chiefs need a cornerback to play across from Marcus Peters now that Sean Smith has left for the division rival Raiders.

Butler is a superior run stuffing defensive tackle, and would be a great match with ends Chandler Jones and Calais Campbell.

Josh Norman is coming off of a huge year, but Charles Tillman needs replacing, as the aging corner has lost a step and can't keep up with opposing wideouts.

Mark Sanchez is not a valid starter for this Broncos team. Lynch's size and athleticism make him an obvious replacement for the recently departed Brock Osweiler.

*The New England Patriots do not have a first round pick due to legal action following the "Deflategate" scandal.