Snow days. There's really nothing better. With that fateful text message/email/website update, your entire day is suddenly filled with possibility. White, fluffy possibility. And there are an infinite number of things you can do: sleep, play in the snow, trek to your friends' houses, or just stay home with a cup of hot chocolate and admire the beauty of nature from afar.

Photo: A tree stands covered with snow in Blair courtyard after the snowfall Wednesday.

Photo: A tree stands covered with snow in Blair courtyard after the snowfall Wednesday.

How-ev-er, before the snow day comes the call, and before the call comes predictions. SCO, of course, is the most accurate predictor of snow days; so stick around for updates on whether we'll be having a snow day this Monday. In the meantime, start doing those snow dances, flushing ice cubes down the toilet, wearing your pajamas inside out, etc.—whatever it takes!

Now, for the snoWatch, we'll be using a very helpful, very secret weapon to help calculate the odds of a snow day, along with Alert Montgomery updates and our tingling instincts.

Around 3:45 p.m., the National Weather Service issued a Winter Storm Watch for Montgomery County beginning at nine p.m. on Sunday, Jan. 25. The message noted that "residents should prepare for possibly significant snowfall within the next 48 hours." Does that sound promising to you? It sure sounds promising to me.

Unfortunately, our very secret weapon is currently giving a 36 percent chance of a snow day on Monday, which means it's possible but unlikely. Sigh.

Still, there's hope. The National Weather Service predicts rain and snow Sunday night, with a low of 29 degrees producing all snow after three a.m. The 80 percent chance of precipitation endures through the night into Monday, when—with a high of 33 degrees—snow will likely continue.

In fact, snowfall is predicted well into Tuesday. Could this be a three-day snoWatch? Stay tuned.

Our secret weapon is now giving an 82 percent chance of a snow day, which in their language means "possibility of snow day." HOORAY!

The Winter Storm Watch is still in effect, now from tonight at nine p.m. to tomorrow at six p.m., and the National Weather Service is now giving a 90 percent chance of precipitation tonight, which--given that there will be a low of 32 degrees--will mean snow after 10 p.m.

In terms of snowfall, they're predicting one to two inches tonight, with an additional inch tomorrow during the day. It's not much, but it could make all the difference. Stay tuned.

Hey guys, Brian here. Zoe and I have been diligently tracking this storm for you since Day 1, but I'm afraid this is when we're going to have to bring you guys some bad news. 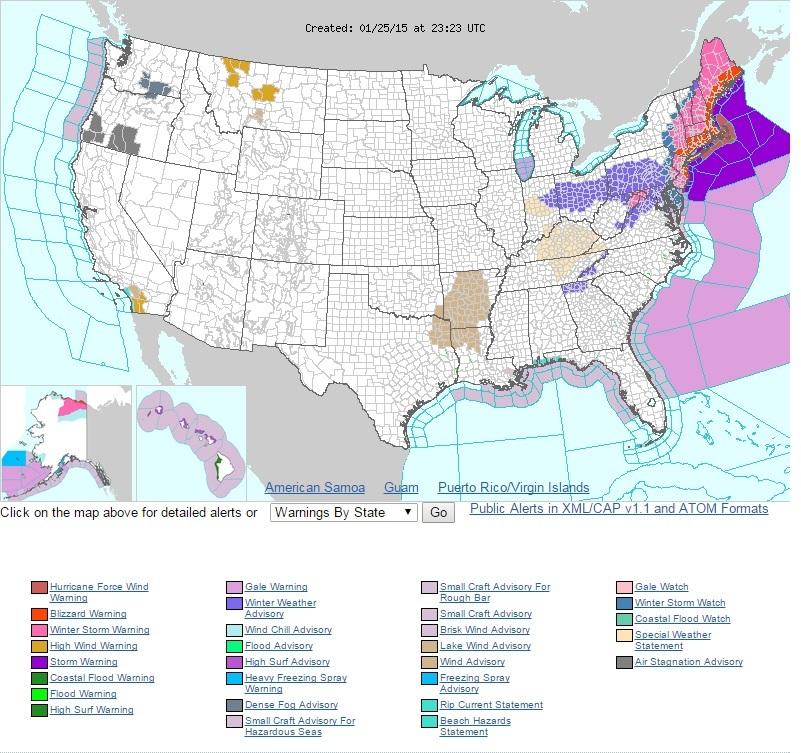 Photo: As you can plainly see, Maryland is squarely within the "Disappointing Lavender" snowfall range, making the chances of a snow day tomorrow slimmer.

Photo: As you can plainly see, Maryland is squarely within the "Disappointing Lavender" snowfall range, making the chances of a snow day tomorrow slimmer.

Anyways, please observe the colors. Observe the scary reds and pinks that run along the Northeast. Now guide your eyes towards Montgomery County, which is shaded with a wimpy purple. Yes, that purple is a Winter Weather Advisory, which is a downgrade from the Winter Storm Watch that was previously issued for our area. And yes, that means less snow – 2 to 4 inches, according to NWS.

Basically, this storm is an Alberta clipper that will sweep down over us and then explode somewhere over the Atlantic into a monster storm and attack the Northeast. Those bright reds you see? Some places there are expected to get over two feet of the white stuff. That includes major cities like New York City and Boston. Unfortunately, the storm doesn't really seem to care about us and will probably explode AFTER it dispassionately glides over MoCo.

The area around Blair should probably be getting an inch or two tonight. (There will be another wave of snow tomorrow – more on that later.) But fortunately for us, MCPS is about the size of the Mongol Empire and areas in the northern part of the county, such as the farms of Poolesville, will most likely get upwards of four inches. That should be enough to cause some disruptions, but considering how heartless MCPS can be, I would expect school tomorrow – though there is a good chance for a delay.

Do not fret: we will be doing everything in our power to increase the odds of a snow day. Flushing ice cubes down the toilet is not enough anymore, and we need to take direct action. I for one will be filling up Ziploc bags with water and pouring them onto the Beltway, which should freeze and create an extremely dangerous slick spot.

With all the factors that will be playing in, who knows what might happen? Our colleagues were predicting a pretty big snowstorm for Saturday, until all that fell was pathetic rain and three pellets of ice. We might be wrong again, which would be a good thing. Stay tuned.