Remember when Eddie Murphy wasn't just the donkey from Shrek?

In honor of Black History Month, this SCOback Movie of the Week will be about one of the funniest black comedians of his era. Eddie Murphy hasn't done much of anything since he voiced Donkey in the Shrek movies, and a lot of people forget that he was once a top-billed comedy star. In the 1988 romantic comedy Coming to America, Murphy plays Akeem Joffer, the heir to the throne of an invented African country. He lives a life of luxury until he is arranged to marry a woman he has never met. Deciding that he wants to pursue a strong, independent woman who loves him for something other than his wealth, Akeem decides to travel to America.

Akeem and his best friend Semmi (Arsenio Hall) end up in a small, beat-up apartment in New York City, where they work at McDowell's and live the life of the working man for the first time in their lives. Akeem enjoys his new life, pursuing the love of McDowell's owner's daughter Lisa (Shari Headley), but Semmi is less interested. He becomes fed up with American life, and calls Akeem's father, King Jaffe Joffer (James Earl Jones) to come rescue them. Hilarity ensues. 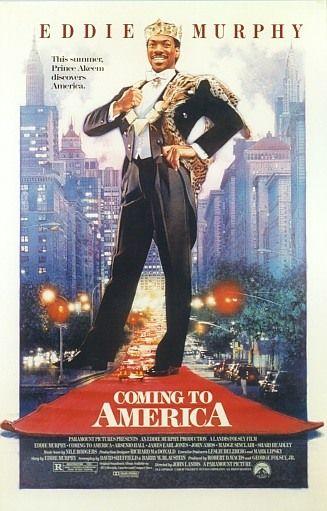 Photo: "Coming to America" is one of Eddie Murphy's finest cinematic performances.

Photo: "Coming to America" is one of Eddie Murphy's finest cinematic performances.

Throughout the movie, both Murphy and Hall show up as several characters, allowing the two actors to pursue with gusto the same kind of brief slapstick sketches that made Murphy famous on Saturday Night Live. Murphy's physicality is as funny as ever, with his long, lanky body lending itself to all kinds of wacky contortions. His wide eyes and over-the-top African accent make even the poorly-formed jokes sound funny.

The romantic angle between Akeem and Lisa is, for some people, a bit understated, but the idea is an interesting one. The prince is so fed up with his wife-to-be agreeing with everything he says and catering to his every need that Akeem decides he wants someone who will stand up to him. Lisa is willing to just that, and the give and take between these characters is an interesting statement about the positive changes from the old world to the new world.

Coming to America doesn't really try to be anything more than it is. It's simply an excuse to put Eddie Murphy in the garb of an African prince, stick him on the streets of New York, and let him be the hilarious comedian he is. Fans of Sacha Baron Cohen's films, like Borat, can see this as a more tame, largely scripted version of the foreigner-comes-to-America-and-finds-love storyline.

Don't come into this movie expecting a cinematic masterpiece. Don't come into it expecting much romance, either. Like any quality comedy, all Coming to America wants to do is make you laugh, and it succeeds in handfuls.