Local restaurants have become common favorites in the Blair community

Breakfast is the most important meal of the day, so it's too bad that most Blazers don't actually have the time to eat breakfast during the week. But don't worry – that's what Saturdays and Sundays are for. After a long night, there's nothing better than sleeping in, waking up and getting a nice, delicious breakfast to help start your day. This SCO expert decided to check out some sit-down restaurants, preferred by most Blazers, to see what exactly makes these spots stand out among the rest. 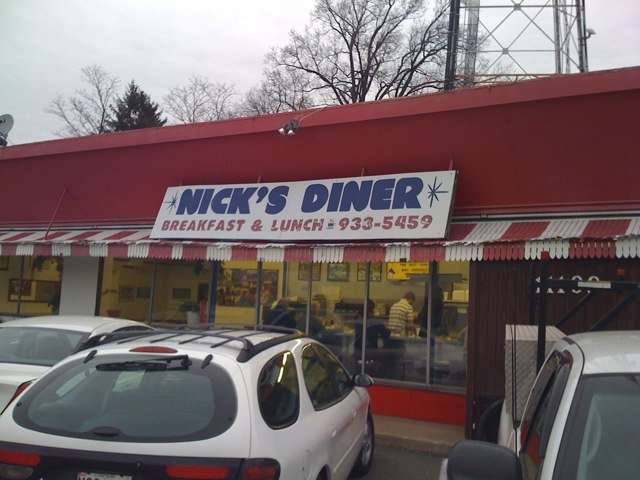 Photo: Nick's Diner is a small restaurant hidden in Wheaton that deserves some recognition for its simplistic dishes.

Photo: Nick's Diner is a small restaurant hidden in Wheaton that deserves some recognition for its simplistic dishes.

Before this adventure, this reporter had never heard of Nick's Diner despite driving past it numerous times. Located in Wheaton, it's in a small corner across the street from Westfield Shopping Center. Nick's Diner looks like, well, a diner and the inside is even more reminiscent of a greasy spoon, with swivel stools and tons of photos plastered on the walls. It's a "Cash Only" diner and the prices are pretty low, so if you're looking for an inexpensive and quick breakfast, this is absolutely a spot to check out. The most inexpensive and least fancy items on the menu – two eggs and toast, home fries and pancakes - are the best items. The eggs are made perfectly, depending on how you wanted them cooked, and they explode with flavor. Every egg special comes with either potatoes or toast – though the toast is a little dry, so I'd go with the potatoes or home fries. Nick's pancakes are fluffy and scrumptious; the blueberry is a personal favorite because the fruit is extremely fresh and the blueberries are perfectly sprinkled throughout the pancakes. Nick's Diner is only open for breakfast and lunch, so everything is freshly cooked. There are even some Greek options for those willing to go outside of their comfort zones, though the breakfast options consist exclusively of American classics.

Most Accessible: Eggspectation
Eggspectation is right in Downtown Silver Spring, which makes it easier for Blazers around the community to make their way to the restaurant. Located next to Austin Grill, Eggspectation is always packed and provides outdoor seating when the weather is just right. Most Blazers have visited the restaurant, known for over the top breakfast items, including – as expected – grand egg recipes. The classic Eggspectations omelet is loaded with bacon, sausage, ham and tons of veggies, including peppers and mushrooms. It's definitely a mouthful and will probably break the bank, but it's worth it. The peppers, mushrooms and meat make the perfect combination and every bite makes you yearn for more. However, Eggspectation doesn't really have many options when it comes to pancakes, waffles and French toast; you can get them all there but the side options are pretty basic and don't bring anything new to the table.

Although the food is good, the prices at Eggspectation are on the higher side – Blazers looking for a cheaper option should consider dining elsewhere. 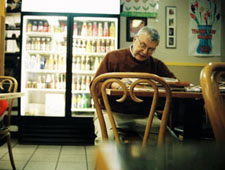 Photo: The family style restaurant stands out due to its unique menu choices.

Photo: The family style restaurant stands out due to its unique menu choices.

Located in the heart of Takoma Park, many TP residents find themselves going to Mark's Kitchen when looking for the perfect breakfast. The family restaurant is unique, mainly due to the fact that it doesn't just offer American classics, but rather a surprising twists on common entrees. Restaurant owner Mark blends Asian and American tastes together by preparing familiar staples with an international style. The restaurant's omelets and pancakes really stand out on their own, but for a spin on the regular flapjack, it's worth trying the ginger pancakes that pop with a sweet and distinct flavor. Other out-of-the-norm breakfast options include seaweed and chicken teriyaki omelets, both of which may seem intimidating at first. The chicken teriyaki omelet itself is very filling; the chicken is cooked perfectly and the exceptional taste makes for an enjoyable meal. For those vegetarian Blazers who are looking for a place to find choices that fit their eating habits, Mark's Kitchen should definitely be on their list. The restaurant offers delicious vegetarian choices, such as the Three Cheese Omelet, which consists of Cheddar, Dill Havarti and Gouda cheeses. The combinations of the three cheeses make for a hearty and savory breakfast that melts in your mouth with each bite.

Old Time Classic: Tastee Diner
If you live in Silver Spring and have never been to the Tastee Diner, you are definitely missing out. The place has been around for a while and may not be as popular as it once was, but the food has not changed one bit. The atmosphere is what makes Tastee Diner different; it is a typical diner setting with great service. Tastee Diner is a family-oriented restaurant and the environment, from the servers to the fellow customers, is especially welcoming. When it comes to the food, there isn't much to say. Although the meals are pretty good, the menu does not stand out among the other restaurants on this list. The meals offered mimic both Eggspectation and Mark's Kitchen; however, there are fewer options at Tastee Diner than the previous two. The pancakes are definitely a great option for a first-time visitor at Tastee Diner; the hotcakes come in a stack of three and are served in different ways. You can order them with two eggs, your choice of meat or just eat them with warm syrup. The pancake portion size is huge, so if you're not used to eating tons at once, the hotcakes are perfectly for sharing. Overall, Tastee Diner is pretty generic, but the atmosphere at Tastee always makes the experience quite pleasant.