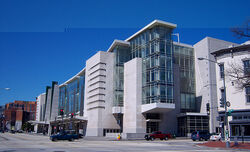 Last Tuesday evening, the PTSA discussed graduation venues at its monthly membership meeting, but remained undecided as to the venue for this year's graduation after the tour and subsequent meeting.

According to Senior Class Parent Liason Kathleen Bryan, Montgomery County Public Schools (MCPS) has only allocated $5,000 to high schools for graduation ceremonies, significantly less money than has been spent in past years for Blair's graduation. The sum is enough to cover the DAR Constitution Hall in Washington, D.C., where most other MCPS high schools will graduate.

Due to its low holding capacity, the DAR location was considered unattractive to the Blair faculty and PTSA. The 3,690-person capacity of the Constitution Hall is too small for the 629 seniors, 225 staff members, Board of Education members, other Montgomery County dignitaries and the family members who would attend graduation. Each student would be allowed only two tickets for family members if Blair graduated at DAR Hall, according to Hartfield.

In past years, when MCPS paid a larger share of graduation costs, Blair split the cost of graduating at University of Maryland's Comcast Center with Magruder and Sherwood High Schools. This year those schools rejected the Comcast Center in favor of the more affordable DAR Constitution Hall, said Bryan.

The final cost of the Convention Center could be almost or equally as expensive as the Comcast Center, according to Hartfield. The price of two available rooms at the Convention Center is $12,000 or $16,000, depending on which room the PTSA chooses. The $12,000 Exhibit Hall accommodates more people than the Banquet Hall, while the $16,000 Banquet Hall comes equipped with an audio system. Additional expenses, such as security or video and audio amplification, would further increase the cost.

Last spring, the PTSA administered a parent survey that prompted Blair to discard the Equestrian Center in Prince George's County as a graduation venue. The Jericho House of Praise was also eliminated from the list of possibilities due to controversy over the separation of church and state, according to Bryan. MCPS officials fear that lawsuits could be filed by national advocacy groups in the event that Blair selected the church as a graduation site.

Principal Williams hopes to have the venue finalized by late November, according to Bryan. "It would be to our benefit if we can finalize our investigations and pick a venue and negotiate," she said.

Hartfield said she would still like to see the Comcast Center be used as a graduation site despite its price. Although most of the Tuesday meeting focused on discussing pricing and accommodations at the Washington Convention Center, Williams concluded by reminding the PTSA that he is still trying to negotiate use of the Comcast Center.