Metro's random searches are inefficient and should be ceased

In mid-December, the Washington Metropolitan Area Transit Authority (Metro) began random inspections of carry-on bags at two Metrorail stations. The purpose, according to Metro, is simple: to keep riders safe and stop explosives or any other harmful devices from entering a train. But considering the limited resources and capability of the Metro system, the program is flawed and terribly inefficient. 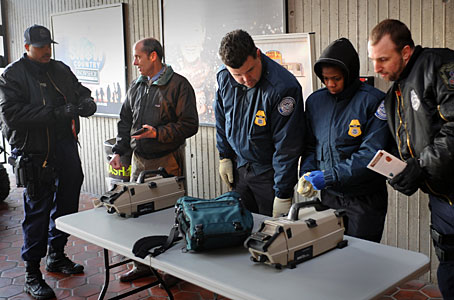 According to a WTOP.com article written the day the searches began, Metro decided to implement the program after several terror threats against the Metrorail system. In 2008, Metro tried to employ a similar policy to no avail. Amidst controversy from daily riders and uncertainty from its board members, Metro decided not start random bag searching at that time. According to a DCist.com poll taken in 2008, 75 percent of readers and riders opposed the planned searches. So why start now?

Since the Dec. 21 bag checks, Metro has set up three more inspection sites at various stations. Metro Interim General Manager Richard Sarles compared the new program to those already implemented in larger cities such as Boston and New York. Sarles told The Washington Post that the searches were a way to boost security. "It's good to vary your security posture," he said. However, Sarles, who formerly worked for the New Jersey Transit Authority, failed to address a huge factor. Metro's taskforce consists of 20 officers and trained security dogs, while the New York and Boston systems have over 2,500 officers working to keep their rail systems secure. Their systems are much better equipped to handle random searching.

Furthermore, to ensure that searches are "random," Metro stated that it will search every 17th person – however, the likeliness of this is slim. Metrorail has 86 rail stations and 12,000 bus stops that serve over 1.2 million passengers every weekday, according to the Washington Post. It is highly unlikely that Metro officials will be able to accurately count every 17th person in order to conduct the random searches. Adding to this, searching passengers that look "suspicious" can be connected to any factors, including race. The "every 17th person" rule seems like it is just an excuse Metro will have ready when they are slammed with a racial profiling lawsuit.

And concerning cost, Metro Police Chief Michael Taborn said that the program does not dip into Metro's resources. "It won't cost us anything," Taborn said in a Washington Examiner article. Taborn says that grants from the Homeland Security department of the federal government allow for the officers, K-9 dogs and equipment needed to implement the searches. However, Taborn does not realize that Metrorail could be severely affected economically if the searches continue. According to the Washington Post, at a Riders' Advisory Council (RAC) meeting about the policy, many expressed the sentiment that they would stop riding Metro if the searches continued. The new policy will most definitely cost Metrorail something – loyal ridership and revenue from the riders who choose to stop using the public services.

Besides the blatant disregard for riders' time and schedules, it is clear that Metrorail has not realized that their policy is filled with holes. If a rider refuses a bag search, they must leave the station – however, they can simply board at the next train stop.

Metro currently has other problems that are more prevalent as risks to our community, including replacing track switches, which Metro has decided to take care of in the forthcoming months; and the broken elevators and delayed trains that rattle the nerves of riders during the daily rush hour. There is absolutely no proof that searching people's carry-on items will enable Metrorail to crack down on security or that the new policy will work effectively. Instead of practicing security theatrics, Metro should focus its time and money on solving major problems to the actual trains themselves and preventing further accidents.