Fundraiser will run through March 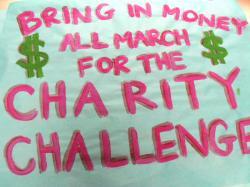 The Student Government Association (SGA)-sponsored Charity Challenge will run from today to March 20, according to SGA Chief of Staff Vijay Baharani. Each grade will raise money for a chosen charity, and the winning class will be announced in early April.

Freshmen will donate to The Save Darfur Coalition, sophomores to the Children's Inn at the National Institutes of Health, juniors to the Make a Wish Foundation and seniors to the International Justice Mission, according to SGA treasurer and coordinator of the Charity Challenge Malcolm Foley.

To determine which class wins, score will be kept in terms of cents. Points will be awarded for coins and subtracted for dollar bills, which students can donate to other grades' charities to drop the competition's point totals. Students who would like to donate bills to their own charity can place their money in an envelope so that those dollars are counted as positive points, according to Foley. 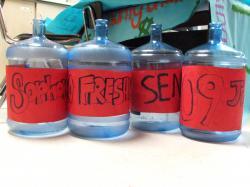 Photo: Each class will have its own canister for students to put donations in.

Photo: Each class will have its own canister for students to put donations in.

Donations can be made during both 5A and 5B lunch outside the Student Activity Center (SAC) from Monday to Thursday. Bins for each charity will be placed on the SGA table and kept under SGA supervision. On Fridays, SGA members plan to walk around carrying the bins, accompanied by Blair's mascot, to promote the drive, according to Foley.

While the SGA has high hopes for the Charity Challenge, they are not aiming for a certain goal. "This is only the second year we're doing it and last year we did well," Baharani said. "But we don't have a set expectation."