Blair security is now strictly enforcing the after-school locker policy, under which students may not use lockers after 3:05 p.m. 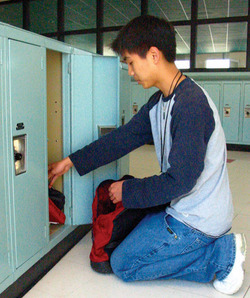 Photo:
According to Head of Security Edward Reddick, the policy targets problems with Night School disruptions, door alarm set-offs, locker thefts and building cleanliness. Reddick stated that these issues intensified this year with the school's increased use.

Students caught visiting their lockers after 3 p.m. will first be given a warning. In subsequent cases, administrators will be notified to deal with the students.

The policy is in line with a handout distributed in a meeting at the beginning of the school year to club and athletic sponsors, which states that all students must "bring their items with them" to their after-school activities instead of storing them in a locker to be retrieved after-school.

Carrie Addison, a Night School secretary, explained that students in the school building triggered the alarm.

Addison added that the administration does not want students to get into the habit of visiting Blair past school-hours. "Usually, without Night School, kids can't come back in the building," said Addison.

Reddick also cited a rise in locker thefts in March as one of the major reasons for the recent crackdown. Additionally, said Reddick, students who remain in Blair after school-hours typically litter, increasing the workload for building services. 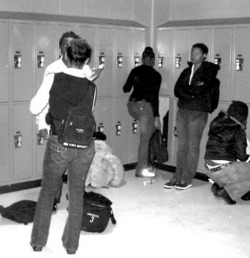 Photo: Students at their lockers before first period on March 23.

Photo: Students at their lockers before first period on March 23.

Although many students and teachers seem to be unaware of the locker policy, it has been in place for the past two years, according to Linda Wanner, the administrator who supervises clubs and athletic activities. She believes the reason why so many are uniformed is that not all club and athletic sponsors attended a meeting at the beginning of the year when the rule was discussed. "Like everything else, you put it out and hope people will follow the rules," said Wanner.

Freshman Crystal Morton, a member of Blair's Step Team, sees the rule as a double-edged sword. During practices, Morton and other members must now carry their belongings to the SAC, where the team practices -- a benefit in that their things are there to take home right after practice, but also a "pain," said Morton, because they now have valuables out in the open for others to steal.

Renee Park. Renee is a senior in the Magnet Program (finally!) and is psyched about a brand new year of Chips, Chips and more Chips! She's currently wondering why she took MathPhys with Silver Chips and how soon she'll die, but meanwhile, Renee's enjoying writing, reading, studying … More »