This statement comes from someone who went to Bush's swearing-in ceremony last week fully expecting a rewarding time. From my experience, the festivities were largely inaccessible to the public because of security measures and protesters.

On Thursday, Jan. 20, I started my journey at 10:05 a.m. at Loews L'Enfant Plaza Hotel, located a little less than a mile away from the capital. I was standing three blocks from my designated seating section at 10:17 a.m. It would not be until 11:39, only minutes before Vice President Richard Cheney's swearing-in, that I would get into my section. The main reason for the delay was the painstakingly slow security measures taken by the administration. I went through three security stations in that hour and 22 minutes, but there were no metal detectors in sight, and when I was being checked for weapons, only my jacket was patted down. 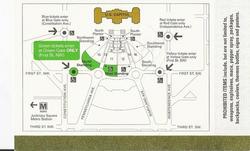 Photo: The back of the inaugural ticket.

Photo: The back of the inaugural ticket.


The ineffectiveness of security might have been because nobody in my section was able to even see the president. A pair of enormous trees was located directly between those of us in the Green Section and the area where the president was going to be inaugurated. A large television was put just left of the swearing-in area in the president's place, but unfortunately, that too was partially hidden behind trees. The crowd went silent when Bush began his inaugural address, but the many helicopters and jets above did not show the same respect. The whirring of engines passing overhead left the crowd mad libbing much of the speech.

The peaceful, uniting words of the president also lost some meaning against a background of countless protesters in and around the viewing sections. When one man in my section started loudly criticizing Bush shortly before the speech, he was arrested and carried off screaming. That man's disrespectful actions were comparable to the actions of the Bush supporters, who shouted reprimands at him as he left. Another unattractive interruption happened when a police officer used pepper spray on a belligerent demonstrator. The pepper spray accidentally hit a friend I was attending the inauguration with, and his eyes were still burning the next day.

After the inaugural address, I entered a line on a street that connected to Pennsylvania Avenue, where the parade was held. There, I met an elderly woman who flew her whole family in from Oregon to attend the inauguration. She paid $500 per family member for seating to watch the swearing-in, but she missed the whole event because the lines held her up for well over an hour. As we stood in a line a few thousand people thick, the woman compared the lines she waited in on Jan. 20 to the lines she waited in on Ellis Island when she first came to America. I gave up on the parade after an hour and a half of waiting; at the rate security was letting people in, it was going to be another few hours until I entered.

Even getting away was difficult: All streets running north-south near the capital were closed since that morning, and the subway stations were closed down early that afternoon.

With the exception of the protesters, the people I met at the inaugural events were all avid Bush supporters who contributed with their votes and wallets to Bush's reelection and inauguration finances. Historically, the presidential inauguration has been a time of uniting people in celebration, but nothing like that happened on Jan. 20.