Semester Shakedown to be held Friday

BNC-sponsored event will be a mixer for county students

Blair Network Communications (BNC) will be hosting its annual "Semester Shakedown," a Downcounty mixer, this Friday from 7 - 10:30 p.m. in the SAC. The casual-dress dance is open to all Montgomery County high school students with a school ID, according to BNC Public Relations Executive Director senior Sriya Sarkar. 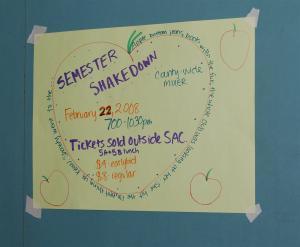 Photo: Signs advertising the Semester Shakedown have cropped up along Blair Boulevard.

BNC will be pre-selling tickets in front of the SAC until the day of the dance. According to Sarkar, the BNC have decided to extend the discount price of $4 until Tuesday, after which tickets will be $8.

BNC sponsors the Semester Shakedown annually to help raise funds for equipment, and unlike homecoming or prom, the dance is advertised at other schools, according to Public Relations Associate Sumih Chi. Although it has been advertised as a mixer for the Downcounty Consortium (DCC) in past years, many non-DCC schools have been contacted to advertise the dance to their students this year. Currently, Springbrook and Kennedy High Schools have decided to advertise the event, while Blake and Northwood have declined, citing separate events occurring Friday as the reason, according to Sarkar. Wheaton High School will also be participating, Sarkar said.

Sarkar expects a good turnout for the dance and said that it is usually popular among county students, "Last year we had around 300-400 people from Blair and other schools," she said. "This year we expect the same results, maybe more."

The dance will have refreshments and snacks, as well as a DJ and a dance competition with prizes for the best dancers. The DJ will be from Davis Deejays, which has done over 280,000 parties, dances and receptions, according to Sarkar. Students are allowed to dress casually as long as they obey the school dress code, according to Chi.