Senegal at a glance

Found in the westernmost region of Africa and surrounded by four countries to the north, east and south and the Atlantic Ocean to the west, Senegal is one of the most individual countries on the continent. Its geography and location gives it flat rolling plains, a semiarid Sahel region in the north, plateaus over 1,600 feet high, wetlands and forests in the south. What makes it even more uncommon is the fact that The Gambia is an enclave inside Senegal. 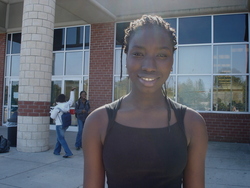 Photo: Adja Koite left Senegal when she was twelve years old because her father, who worked for the embassy in Dakar, was relocated to the District.

Photo: Adja Koite left Senegal when she was twelve years old because her father, who worked for the embassy in Dakar, was relocated to the District.

The Senegalese flag is made of three vertical stripes of green, yellow and red with a five branch green star in the middle of the yellow stripe. The green refers to nature, the yellow to gold (a symbol of wealth) and red to the blood of their ancestors who fell on battlefields defending their heritage, values and identity. The five points in the star each represent continents of the world.

The French colonized Senegal in the fifteenth century. Before they arrived several kingdoms peacefully coexisted in the area. At the French's arrival, the kingdoms resisted their invasions and as a result numerous wars were fought between the two groups. The kingdoms were defeated and the French felt free to exploit the country and its people of their natural resources in order to build its own growing industries. This lasted until the 1960s when most African countries fought for their independence from their colonial powers; Senegal received its independence in 1960. Senegal is now a republic run by president Abdoulaye Wade. The country has an appointed cabinet that aids the president along with a National Assembly of 120 seats.

Senegal's ten million inhabitants mostly live in urban areas such as the capital city of Dakar and the other major cities like Kaolack, Saint Louis, Ziguinchor and Thies. A severe drought in the 1970s led to a huge migration from people living in rural areas to the big cities. This has left cities like Dakar overpopulated and polluted while other areas are practically empty. Muslim scholars traveling across the Sahara desert in the thirteenth century brought Islam to Senegal then peacefully and gradually converted the population. Today, 83 percent of the population is Muslim, less than 10 percent is Christian and a small minority still practices animism.

From Senegal to Silver Spring

Adja Koite left Senegal when she was twelve years old because her father, who worked for the embassy in Dakar, was relocated to the District. She had to leave her many friends and her private school. She also misses having afternoon discussions on her friend's porch and watching French and Chinese films (with subtitles) at the cinema.

When asked if she misses Senegal, her voice rises a couple notes and she exclaims a big "Yes." She plans on to go back this summer to visit her friends and family. For now, she does like one thing about her move to the U.S.: Blair High School. "I like the school [here], you know, because in Africa they beat people," she explains. Teachers in some African countries, including Senegal, are allowed to use corporal punishment if necessary.

It didn't take Koite long to adjust to the American lifestyle but once in a while she feels lonely. "Sometimes when I don't have anybody to talk to and my friends are not there, I feel uncomfortable," she says.

The most dominant ethnic groups in Senegal are the Wolof, the Serere, the Pulaar and the Jola. Each ethnic group has a language of its own but they all speak Wolof. French is the official language of instruction, business, and government while Wolof is used more socially.

Many, in Senegal, believe wealth is measured by body size, because the wealthier the family, the more oil and rice can be used in preparing a dish like Yassa, one of the most widely known dishes from Senegal. It is made of rice and chicken covered with a sauce of sliced onions and spices. Another favorite dish is Thiebou dien, a meal of rice and fish typically eaten at lunch.

Along with Yassa, Senegal is also known for its style of music, Mbalax. Mbalax, a tribal style of music that began using only sabar drums but now incorporates a mix of Afro-Caribbean pop, has become the "ambassador" of Senegalese music and is popular in several parts of Africa. The music has produced two internationally known superstars, Youssou Ndour and Ismael Lo.

Fifty miles away from Saint Louis, in the north of Senegal, is the bird park of Djiodji. This beautiful park is one of the most important bird sanctuaries in the world. Its position makes it a favored gathering place for migrating birds. From October to March, thousands of pelicans, cormorants, gulls, ducks of all kinds and flamingos are among the main attraction for visiting tourists and ornithologists. It is listed by UNESCO as a World Heritage Site.

Information compiled for this story was received from the Senegalese embassy. If you have any more information on Senegal, please contact Ms. Fatoumata B. Ndao, the Cultural Counselor at the Embassy of Senegal in Washington, D.C. at (202)-234-0540.