Johanna Lopez calmly steps to the charity stripe during the third quarter of a mid-January matchup with the Paint Branch Panthers. After sinking her first attempt, Lopez takes a deep breath, goes through her routine and focuses all her attention on the rim. A bend of the knees, a flick of the wrist, a soft swish of the net and a raucous roar from the crowd – the made free throw is Lopez's 1000th point of her Blair basketball career. 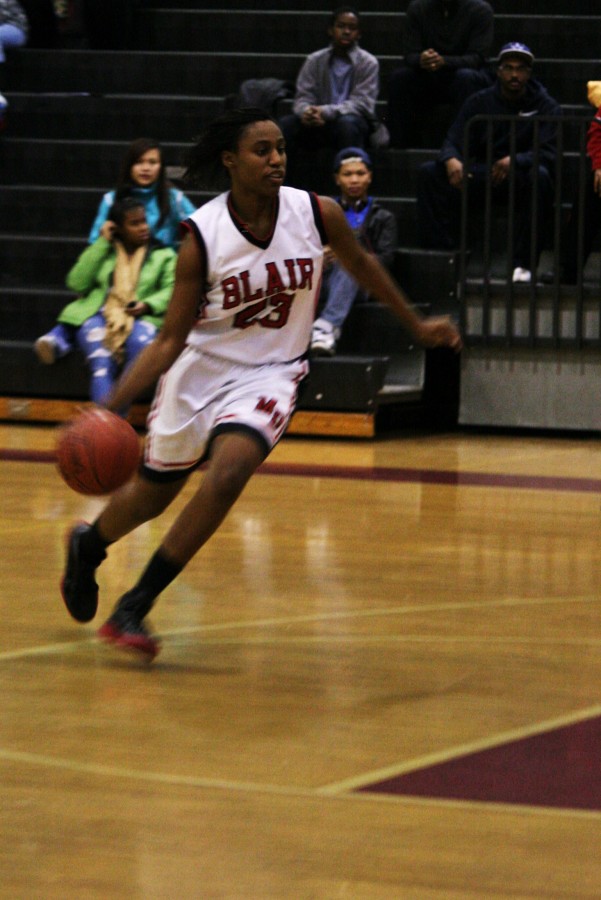 Eight months later, Lopez has reached another major milestone in her athletic career. In early September, the senior power forward committed to play at the collegiate level for Sacred Heart University in Fairfield, CT. According to Lopez, it was the perfect fit for her – both academically and athletically. "I really like the coaches. They've been helping me a lot with this transition,” she said. "It's a really good school, too. The student-teacher ratio is 14 to one, which is good for my learning style.”

After considering offers from High Point University in North Carolina and Stetson University in Florida, Lopez ultimately decided on Sacred Heart. "I kind of wanted a small to medium sized school so it fit that category,” she said. Lopez will travel to Sacred Heart in October for an official visit, and says she's excited at the opportunity to meet her future teammates.

Lopez averaged 19 points and 10 rebounds as a junior in 2010-11. The two-time All-Gazette first-teamer hopes to bring her versatility to the next level. "I'm kind of tall but I'm fast for a post player, so I can guard smaller players,” she said. "That will definitely transition into my [collegiate] game.” Lopez's game is already extremely polished, yet she admits that there's always room to improve. She pinpointed her jumper as an area of focus while she prepares for her senior season.

Senior forward Rose Kalala had high praise for her teammate. "[Lopez] is a hard worker, and she knows what she wants out of her basketball career. So I mean it's just the next step,” Kalala said. "I think that she will adjust just fine.” Kalala also pointed out Lopez's ability to motivate and lead a team. "During halftime, and before games, Johanna always has key things to say,” Kalala said. "She's a great leader, and she's definitely a fun player to have on the team.”

When asked what she'll miss most about high school basketball, Lopez responded without hesitation. "My teammates. I've been playing with most of them for four years – most of us have been on varsity since we were freshmen,” she said. "So them, coach [Erin] Conley, and just Blair's atmosphere.”

However, Lopez and the rest of the seniors still have a whole season of high school basketball to look forward to before anyone goes off to college. "Honestly I'm just really excited to see where this season takes us,” Kalala said. "I feel like we have a lot of potential…Hopefully we can get as far as possible in the playoffs.”