On Wednesday, Nov. 14, Courtney Wyche’s close friends, family and coaches gathered in the Media Center to celebrate Wyche’s official signing of the NCAA Letter of Intent to accept a full-tuition athletic scholarship and play on the Women’s Softball Team at the University of Maryland, College Park (UMD).

Wyche has been playing softball since she was in elementary school but was determined to improve and refine her skills as a pitcher during her time at Blair. “I’m very excited to have this opportunity,” said Wyche. “I’ve worked hard over the past nine years that I’ve been playing softball, but for the last four years in high school I’ve really been developing my craft,” Wyche said. 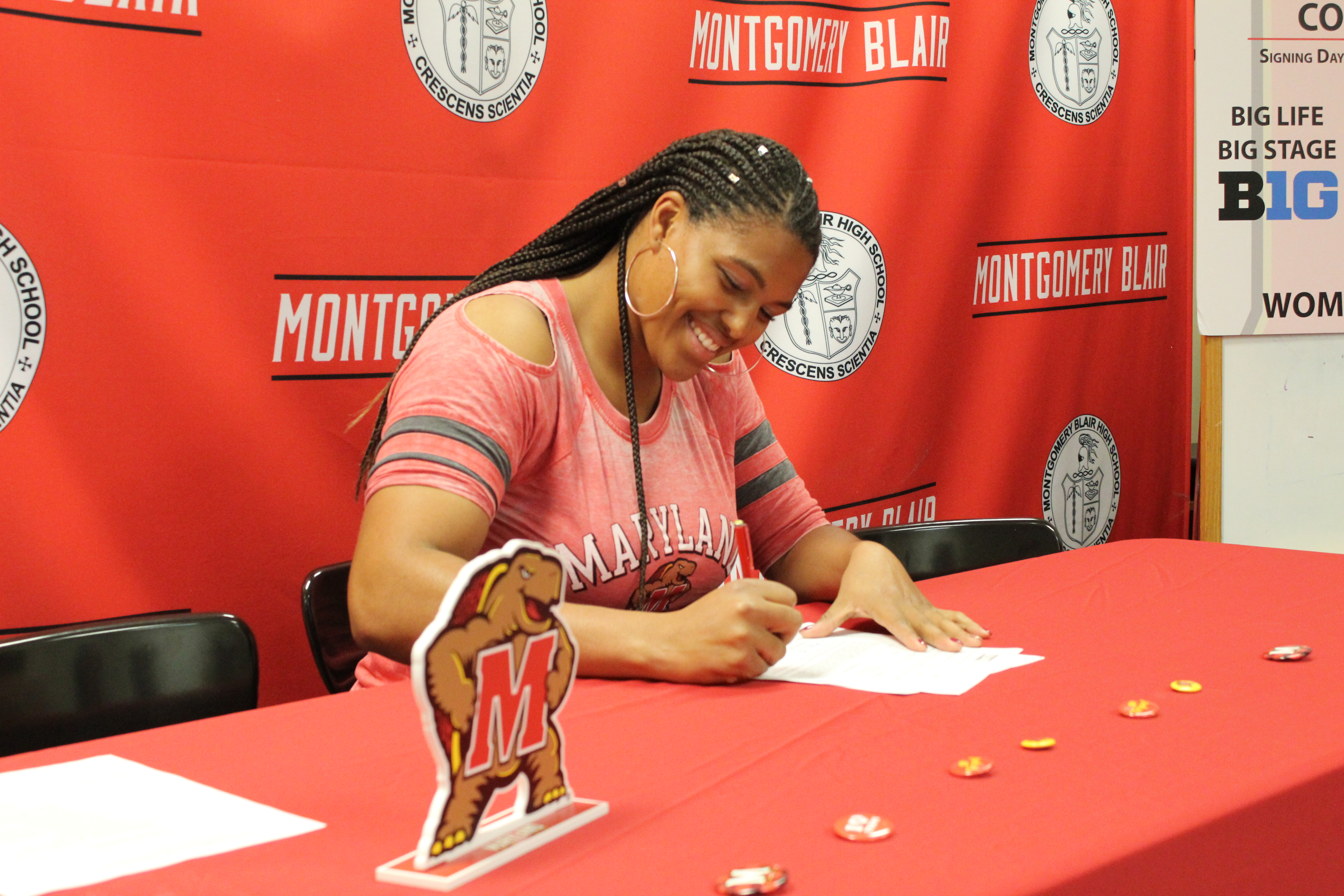 As a result of her persistent dedication on the field, Wyche earned the title of Montgomery Blair’s Most Valuable Player Award, was named Honored Finalist Gatorade “Player of the Year” and recorded 256 strikeouts in 126 innings.

Apart from her impressive athletic achievements, she also excelled academically, receiving a Letter of Commendation from President Barack Obama, earning Academic Honor Roll with a 4.5 Weighted GPA and serving as a member of the W.E.B. Dubois National Honor Society.

Wyche’s athletic accomplishments soon led to scholarship offers from the University of Missouri, University of Virginia, University of South Carolina and others, prior to her decision to verbally commit to UMD in 2016. She felt the university fit her best personally and academically. “I’m really close to my family so I didn’t want to go too far from home, and I know UMD has excellent academic programs and majors,” Wyche explained. “As for softball, I really love the coach, Coach Wright, and she gave me a lot to look forward to in UMD, contributing as a pitcher.”

In the future, Wyche looks forward to further refining her skills and holds an optimistic view against playing against an entirely different level of opponents. “I look forward to getting a little bit of freedom in college, playing on TV and competing against some of the best in the world,” Wyche said, smiling.

As for athletes aspiring to follow in her footsteps, Wyche emphasizes the importance of consistent perseverance and passion for their sport. “You have to want to really work hard and push yourself. If you have a dream, go for it. Don’t let anybody stop you.”