Senior Amanda Wessel won second place of the oral presentations on her research on malaria vaccines at the regional Junior Science and Humanities Symposium (JSHS) and has advanced to the national level, which took place April 27th to 30th in Dayton, Ohio. 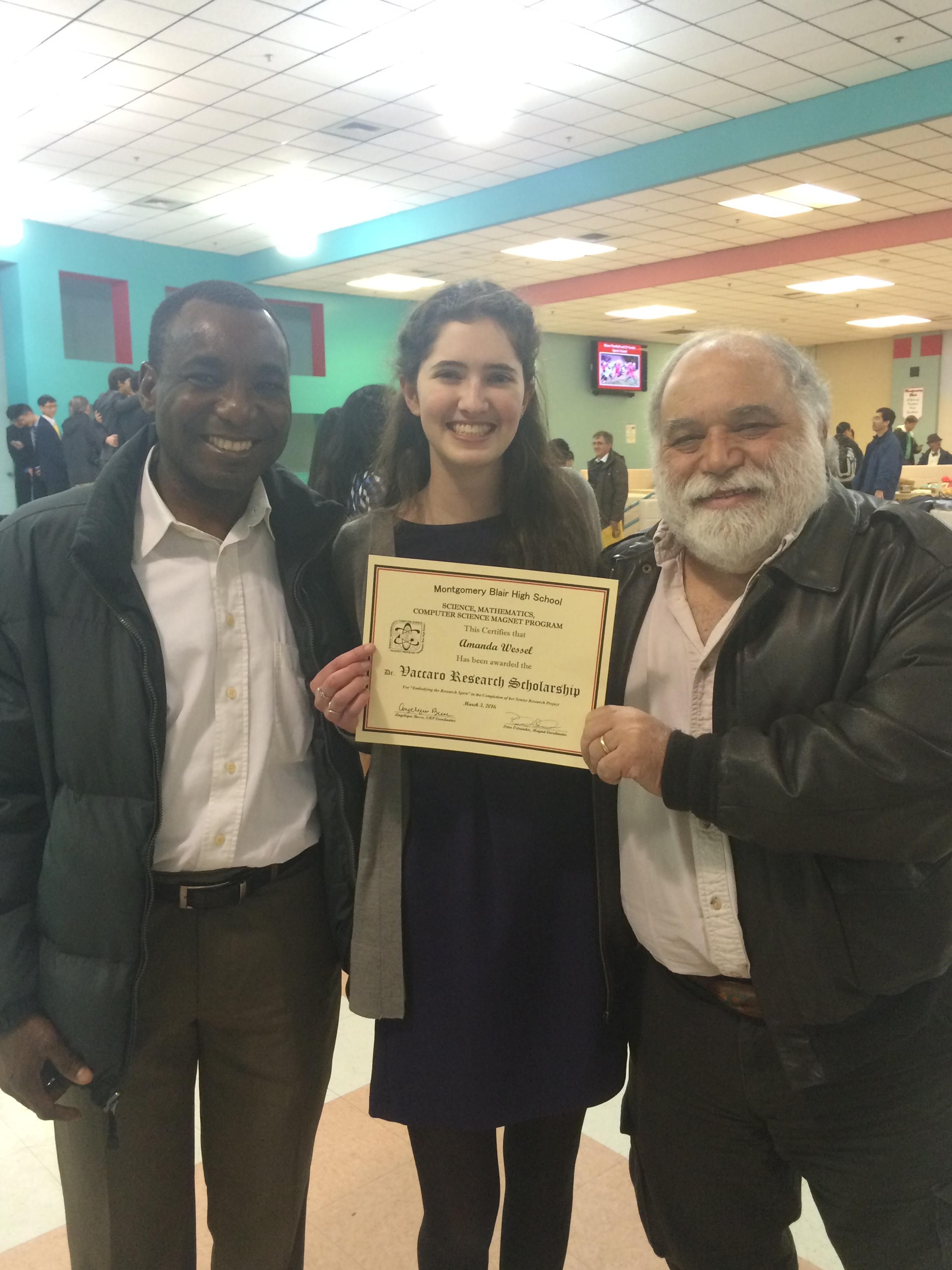 Photo: Wessel was one of the two recipients of a Magnet award that recognizes her enthusiasm and success in her research.

Photo: Wessel was one of the two recipients of a Magnet award that recognizes her enthusiasm and success in her research.

Wessel's project focused on research for a malaria vaccine that is being developed at Walter Reed Army Institute of Research in Forest Glenn. "Basically, I just worked in the lab over the summer and helped them run some of their tests to put together the whole research," she said.

JSHS provides students the opportunity to present their projects, engage with Science, Technology, Engineering and Mathematics (STEM) professionals, and gain exposure to the Army, Navy and Air Force research and technologies. Students are required to submit a paper on an original research investigation in the STEM fields.

The event took place at Georgetown University last month on March 10th and 11th. Wessel, along with 200 other high school students and teachers in the greater Washington Metropolitan Area, attended the Symposium. During the event, participants got a chance to visit laboratories on campus, hear from keynote speakers, learn about research projects conducted by their peers and attend a seminar led by a professional scientist.

Wessel presented her project in the form of an oral exhibition. "I talked a lot about the big picture of the research, like how they made the vaccine and why they made it and why it was important," she said. She presented her project to a panel of judges in an auditorium and was then chosen to move on to the next level. "I was pretty nervous the first time around. I was presenting in this auditorium and I thought I would be presenting in a classroom," Wessel said. The judges critiqued her research according to different standards, including the science thought, creativity and innovation, appropriate duration and logical conclusion of the presentation. The judges then decided that Wessel would advance to Nationals. "For second place I got a scholarship for $1500, that'll go to whatever college I'll enroll in next year," Wessel said. She will present her research again on April 27th to 30th for the 54th National JSHS.

The project started out as her magnet senior research project (SRP). "It began as just something I had to do for the magnet but I found my internship and it turned into something I really enjoyed. It was an amazing experience," Wessel said. The SRP begins during junior year, when students find a topic of interest, mentor and internship. "They get an introduction by writing a proposal. They get to have some experience in scientific writing, review of literature, reading science articles. Then in the fall of senior year, they have part two of research class and that's where they put everything together. They write a scientific paper, prepare a poster, and create a presentation," Magnet teacher Angelique Bosse said. The purpose of the SRP is to excite students about different topics in the STEM fields, but also help them gain experience. "For many of them, this is their first job and first time interacting with adults in the professional environment. They are doing the internships independently so they have to gain confidence in themselves," Bosse said.

Magnet classes help prepare students like Wessel for their internship and research project. Wessel became interested in her internship from her genetics and cell physiology classes, taught by Darcy Sloe. "In general, I gave her background information in her genetics and cell physiology classes to prepare her for the lab and follow procedures and keep a lab journal and peak her interest in the field,” Sloe said. The teachers also guide students along during the entire process. "I had the opportunity to visit [Wessel] over the summer and we helped her edit her paper," Bosse said.

In addition to winning second at the regional competition, Wessel also won one of the two awards given by the Magnet team at the annual Magnet reception for the SRPs. The award is given out to two students who the staff feels went above and beyond, one for biological science and the other for physical science. "She was nominated and selected by the magnet staff for her enthusiasm and excitement about the research," Bosse said.