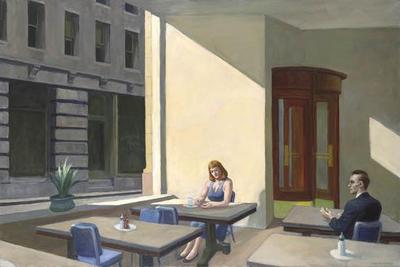 Sunlight in a Cafeteria

Photo: Sara Cohen's "Sunlight in a Cafeteria" is based on Edward Hopper's painting of the same name. Photo courtesy of Yale Art Gallery

Photo: Sara Cohen's "Sunlight in a Cafeteria" is based on Edward Hopper's painting of the same name. Photo courtesy of Yale Art Gallery

Cohen's short story, "Sunlight in a Cafeteria" is about Faye Pearson, a young woman in an abusive relationship. Pearson walks into a diner and reflects about her situation, fighting herself mentally to repair her life. Cohen says that the inspiration for her story came from an Edward Hopper painting of the same name.

At the conference, Cohen met Pulitzer Prize winner William Kennedy, this year's winner of the F. Scott Fitzgerald Literary Award. Additionally, Cohen was given $250 and the chance to speak at the awards ceremony.

She chose to speak about her background of art knowledge. "My father read me art...he trained me in it," she said in her speech. "I made museum guards turn and stare in disbelief, because that chatterbox of a four-year-old actually knew what she was talking about. And I really did."

Cohen's early interest in art led her to the Yale Art Gallery, where she found the painting and got the inspiration to write her story. "[Hopper's] subjects are desolate, lonely people, even if they aren't technically alone," she said. "Faye… has morphed into a vibrant character, one who has become a person all her own."

Cohen competed with other high school students from the D.C. metropolitan area to win the award. "The award is amazing – it's wonderful to know anyone, but especially a specially-chosen committee, values my work," Cohen said.

In the coming year, Cohen plans to continue writing – not individually, but with the help of others. "Writing is really best done as a group activity," she said. "Good editors are incredibly valuable, and there's always more you can learn."