Fundraiser for hurricane relief set for Nov. 26 in Bethesda

Blair seniors will host a second "Crank it for Katrina" dance from 8 p.m. to midnight on Wednesday, Nov. 26 at Bethesda's Juste Lounge to raise money for St. Bernard's Project, a charity that builds houses for families in St. Bernard's Parish, a county that was displaced by Hurricane Katrina in 2005. Seventy-five percent of the proceeds from pre-sale tickets will be sent to the charity. 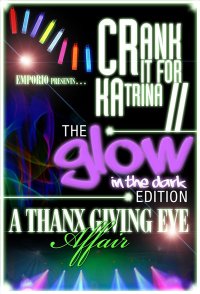 Photo: The event will take place after the half day on Thanksgiving Eve. Image courtesy of Hannah Nelson and Yelena Johnson.

Photo: The event will take place after the half day on Thanksgiving Eve. Image courtesy of Hannah Nelson and Yelena Johnson.

Seniors Yelena Johnson and Hannah Nelson planned this dance after the success of their first fundraiser dance, the original "Crank It for Katrina," in May. Roughly 400 high school students attended the Memorial Day weekend event and $1,300 was raised. "At the end, we send the money in a check and let the organization distribute. Less than five percent of the proceeds go to corporate work," Nelson said.

Johnson and Nelson have hoped to expand their donation pool this year by sending fundraising letters to parents to build money collections. "We are working much harder to raise funds outside of the party," Nelson said. They have set the fundraising goal at $2,000 with $1,500 from ticket sales and $500 from letter donations.

Several changes have been made from last year's dance to "keep things new and interesting," according to Johnson. Instead of last year's Mardi Gras theme, this year's theme will be "Glow-in-the-Dark" and will include free glow-in-the dark accessories. In addition, Johnson and Nelson decided to hold the event this year at Juste Lounge, a popular spot for teenage parties, instead of the Bethesda Hyatt, where the first event was held.

The dance will also provide free soft drinks and a DJ. No dress code is in place, but the planners recommend an outfit that contrasts with the lighting. "A white-and-black look will work and Kanye West 'stunna shades' will also compliment against the backlights," Nelson said.

From all their efforts, the co-founders hope to leave a message of service and passion for a good cause to the Blair community. "What we found most important is a personal drive and motivation. You don't need a large committee or great connections to do something worthy," Johnson said.

The organizers were inspired after watching "When the Levees Broke" in social studies teacher Kevin Shindel's class. "After the movie, we thought a dance would be a good and effective idea," Johnson said.

Pre-event tickets are on sale for $12 while tickets at the door will sell for $20. The $12 ticket guarantees V.I.P. status and no-wait lines. The event is open only to high school students.