The counseling office is mailing letters, making phone calls and sending emails to teachers, students and parents to make sure seniors who are missing Student Service Learning (SSL) hours get them. As of Feb. 10, roughly 30 percent of the class of 2012 did not meet the minimum number of hours needed to graduate, and about 20 to 30 students need 10 hours or less to do so. 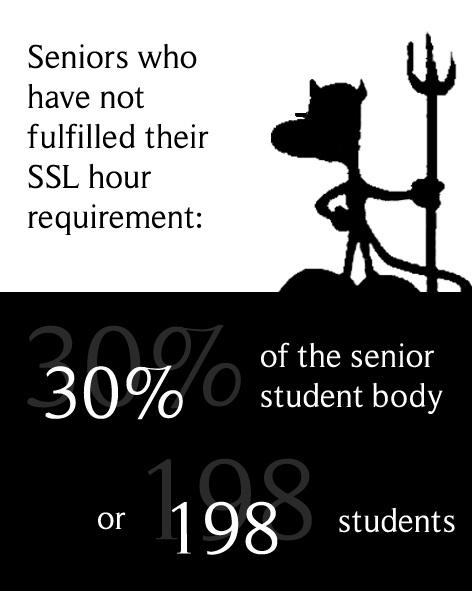 Photo:
Resource Counselor Marcia Johnson said the 198 seniors are between one hour and 30 hours short of meeting the SSL graduation requirement. In December, the number stood at 238. She said that the counseling office sends out letters to the students and their parents and will soon begin making phone calls to them as well.

As counselors meet with the seniors, they find that the reasons for the missing SSL hours vary. Johnson said that major causes include students forgetting to turn in the Student Service Learning Activity Verification form, underestimating the number of hours they had left and having issues with transferring hours from different schools. Transfer students often face the problem of coming from a school that requires fewer or no SSL hours.

Along with letters and phone calls, Johnson said that 12th grade Administrator Andrew Coleman will meet with groups of students to remind them to get their hours in.

The seniors are told that if they do not meet their SSL requirement by spring break, they will not be able to pick up their graduation caps and gowns. But Johnson is confident that those on the list will all graduate this year. "We never had a senior not graduate because of their hours. They always get them before then," she said. However, most students are still anxious about getting the remaining hours they need.

Senior Noorel Syarief, who needs 30 hours, is among those concerned about meeting the requirement in time. "I am very worried about getting the hours before graduation," he said. Like many other seniors, he uses the MBHS Class of 2012 Facebook page for advice on getting the required hours.

Other than a warning letter, he said he has not received much help from the school. Syarief wishes the school would help him out more. "I need immediate information and help on how I could earn them," he said.